MASTER OF ARTS IN TEACHING ENGLISH TO SPEAKERS OF OTHER LANGUAGES, 1991 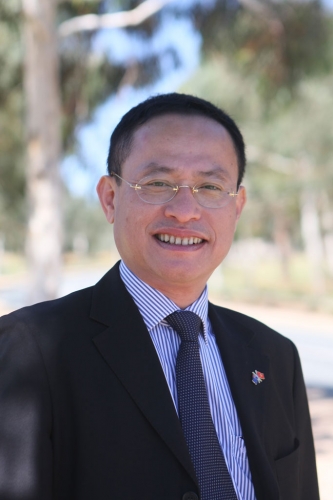 Nguyen Xuan Vang has had a long standing passion for the development of English language education in his home country Vietnam.

He is presently the Director-General of International Education Development, Ministry of Education & Training, Vietnam.

Vang was raised in a rural village of Vietnam with a great respect and dedication towards education. Vang worked hard, and through this great determination he qualified for entry to Hanoi University of Foreign Studies (HUFS).

Commencing tertiary study at HUFS in 1975 and Hanoi National University in 1979, Vang became an English language teacher and the Vietnamese coordinator for a joint program in English Special Purpose (ESP) education with the Canberra College of Advanced Education (CCAE) now the University of Canberra. This project operated for eight years with Vang's assistance: a testament to his skill and determination to further international education for Vietnam.

In the pursuit of his passion for English language education Vang got a UNESCO scholarship to study in England in 1984 for his post graduate study in TEFL and came to Australia in 1989 on an Australian scholarship to complete a Master of Teaching English to Speakers of Other Languages (TESOL) at CCAE.

Having experienced the benefits of the resources at the CCAE Vang successfully pursued the establishment of an ESP and ELT resource centre in Hanoi with a focus on English Language Education. The resource centre opened in 1991 with establishment funding from the Australian Embassy in Hanoi and continues with great success to this day, due to Vang's planning and vision.

Vang's honours and commendations mainly include: Order of Labour and Title of Meritorious Teacher from the President of Vietnam for his outstanding achievements, an Honorary doctorate and a Distinguished Alumni Award from the University of Canberra, Australia and, an Honorary doctorate from La Trobe University Australia, Honorary Professors from a number of international universities, many Honorary Diplomas for Outstanding University Leadership and performance, the Education Medal from the Minister for Education and Training, a Socrates International Award from Europe Business Assembly, a Second Class Order by the President of Brazil for his contribution to Portuguese language development in Vietnam and the Solidarity Star Decoration for outstanding contribution to the development of relationships between Vietnam and Italy.