Hayden Woodhead
Hayden is an international movie director and writer 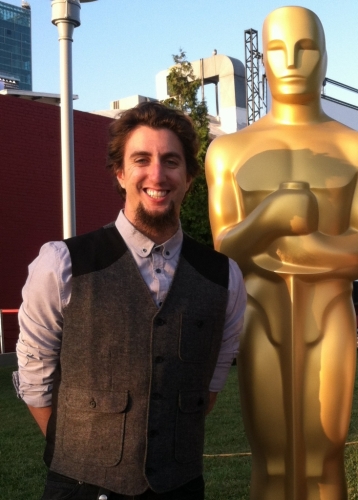 2008 UC graduate Hayden Woodhead is a name you'll be seeing more and more if you watch a lot of movies. In only a few short years, Hayden has had his name attached to dozens of short films, as a writer, director, producer, or crew member (or all of the above!). Most recently, his short film "Discovery", written, directed and produced by Hayden, was accepted into the 2014 Cannes Film Festival. Any film maker or movie buff knows that this is quite an accomplishment!

After graduating from UC, Hayden went on to earn a diploma from the prestigious Vancouver Film School, helping him launch his international film career. Later, Hayden was one of only nine participants in the American Pavilion's L.A. Intensive Program, studying under industry professionals and gaining a behind scenes look at how movies and TV shows are made in Hollywood. Hayden's time at UC was fundamental in developing his skills as a writer. "UC was pivotal in that it planted the seed and moulded my storytelling side. It enabled me to think creatively and emotionally, and to put that into each and every aspect of my creative work," he says. Despite his work as an international film maker, Hayden misses an important part of UC's environment – "The concentration of like-minded people in a smaller space was always inspiring to be around."

What's Hayden's advice to recent graduates? "Your goals do not come instantly, you have to work and you have to work hard, I myself am still working towards achieving the goals I want from life."