David Dudderidge
“Graduating is not the end of your learning.” 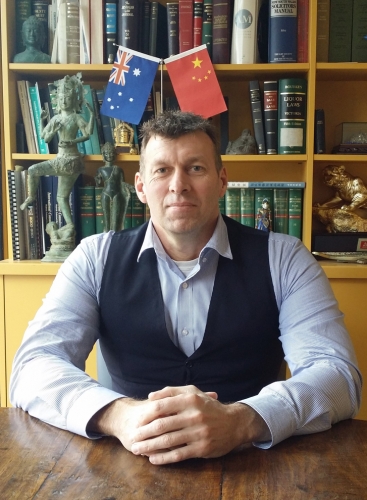 Two-time UC Law graduate David Dudderidge is no stranger to the struggle and commitment that come with pursuing higher education. As a youth, David describes himself as having little interest in school, saying that he "got into a bit of trouble", and while he thought about attending university, he convinced himself that it wasn't the right path for him. After earning his year 10 diploma, David worked as an auto electrician before opening his own tree surgery and arboriculture business, successfully running the company for over 20 years. Looking for more, David asked himself a very important question:

"If I had all the money in the world, what would I want to do with my life?" His answer: Be a lawyer.

Finally pursuing his idea, David enrolled in UC's Legal Studies program in late 2006, earning his Graduate Diploma in Legal Studies in July 2007. David says: "Given my age, I wanted to complete a degree in the quickest possible period of time, which led me to the Juris Doctor (JD)."

UC's JD is a post graduate degree, but David was ineligible because he didn't have an undergraduate degree. However, David didn't let that stop him, and he submitted written submissions on why the UC should allow him to enroll. Eighteen months later, he graduated from UC with his Juris Doctor, with credits for his Graduate Diploma (while simultaneously earning his Graduate Diploma of Legal Practice from ANU).

Finally, with two Graduate Diplomas and a Juris Doctor law degree and decades of work and life experience, David was admitted to the Role of Lawyers of the A.C.T. Supreme Court. He was quickly hired by AB Vincent Northside Solicitors, becoming the only commercial and family law practitioner in the firm. Within his first two years as a lawyer, David helped many of his clients recover hundreds of thousands of dollars, while protecting others from damaging claims and suits.

In only two years after becoming a practicing lawyer, David was hired as a senior consultant at Nevile and Co. Commercial Lawyers in Melbourne, practicing as a solicitor and advocate in commercial, corporate, and family law.

Despite getting a "late start" in his pursuit of becoming a lawyer, David strongly ties his success with the education he received at UC. "While I had a great interest in what I was doing and wanted to succeed, I could not have achieved what I did without the assistance and support of the friends I had made and the UC staff," David says. "There is no doubt that I was the odd one out in many of my classes, however I always felt I was treated equally and that support was available whenever I needed it."