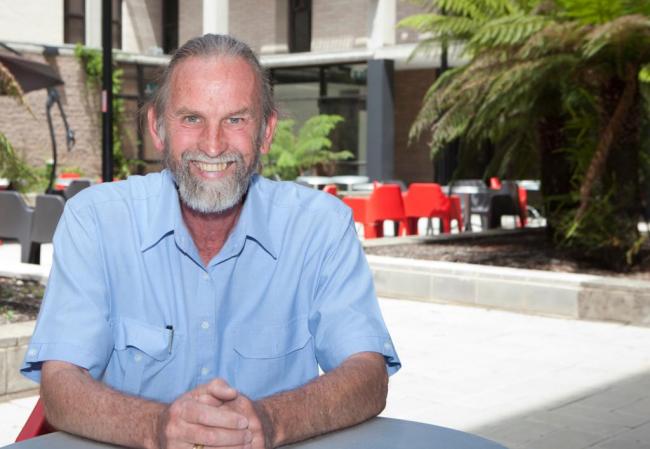 Bob spent 28 years in Canberra after arriving with his family in 1977. During that time he has worked for CTC-TV, Wang Manufacturing, Techway, Compucat, WIN TV and TransACT. Canberra is where his professional engineering career developed and flourished, and his achievements and drive have assisted these companies over the decades. Bob was awarded the first Honorary Degree for a Master of Applied Science in 1989 from the then Canberra College of Advanced Education (CCAE), destined to become the University of Canberra later that same year.

When he first started studying for a Computer Science degree at the CCAE, Bob was already working with computers at the Wang Australia Manufacturing plant at Bruce. "From their inception back in the 1960s, the computing studies courses from CCAE were considered by many to be the best in Australia and they also had a great reputation worldwide," he says. He wanted to continue, but interstate and overseas travel related to his position as Engineering Supervisor with Wang Manufacturing made it difficult for him to complete his studies.

Bob's passion for engineering led him to bring in research funds to the University and he recalls working closely with Emeritus Professor Mary O'Kane. "Mary was a leading researcher into computer speech recognition and Wang Labs in the USA had recently formed a Speech Recognition development team. It seemed like an ideal opportunity to me to combine research and industry, so I took the suggestion to Wang Australia management. They discussed it with senior US management and a collaborative agreement between Wang and the CCAE was developed and signed."

He also fondly recalled how he helped with the development and establishment of the Bachelor of Manufacturing Systems Engineering degree course at the University which was designed to train Industrial Engineers. "I worked with Alan Higgins for around two years on the project. The work I did with Alan was very meaningful," he stated proudly. "Unfortunately the degree course ceased to exist after running for only two years following the Dawkins reforms of the early 1990s."

"I'm a firm believer in Australian manufacturing," Bob shares. His first appointment to an engineering qualified position was with Wang Manufacturing in Hayden Drive, Bruce. "It is ironic, but somehow fitting, that following the demise of the Wang Manufacturing plant, the property was ultimately purchased by the University."

"Despite not completing my degree, my time at Wang and working with the staff at CCAE were real turning points in the development of my professional career."

After leaving Wang, Bob worked for Techway, Compucat and TransACT in degree-qualified positions. During his career at TransACT, Bob was instrumental in the implementation of wireless broadband deployment following successful field trials and also designed a passive CAT5 Broadband Splitter for the company's expanding VDSL network. "By using the splitters and VPNs, we were able to serve two independent residential customers from a single channel drop at a fraction of the cost of duplicating node electronics and still managed 25-30Mbs to each customer."

Since 2007, Bob has been on the road with his wife Diana, travelling around Australia, but gets involved in community organisations when possible. "I believe in giving back to the community," he says. He has volunteered with Blaze Aid in Queensland and at the Mid North Coast Maritime Museum in Port Macquarie.

His passion for innovation drives him. Bob was the prestigious first recipient of Honorary Masters Degree from the University that started a legacy. The list of recipients of Honorary Degrees has now grown to almost 50.