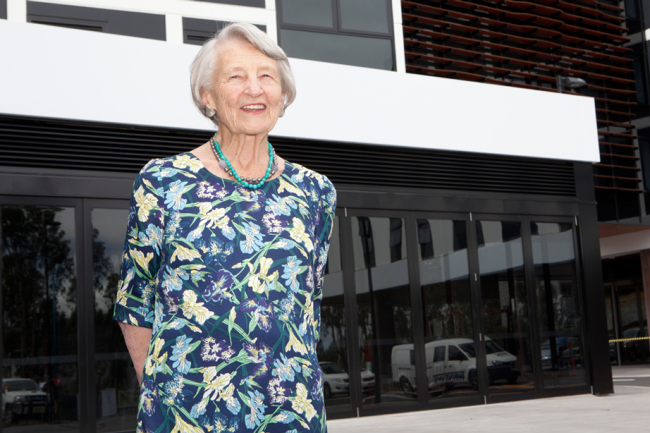 Mrs Patricia Cooper is a distinguished alumna of the University of Canberra; an accolade awarded in 2008 for her lifetime contribution to education in Canberra schools and to the University itself.

At the age of 85, it's incredible to note that Mrs Cooper has been employed as a teacher since leaving UC. In fact, she is still on permanent staff at the North Ainslie Primary School, where the Patricia Cooper Library has been named in her honour.

Mrs Cooper first decided to study teaching as a "mature age student" in 1971 at the age of 40. With no part-time study on offer, she enrolled full-time, while raising five school age children, with the help of her very supportive husband.

"The attitude of society (at the time) was that I was doing something that was quite outrageous... but I'd spent my time as a housewife and mother, and my husband was about to retire. I regard my study as preparation for my second career, the first one being a mother and steering my children through the many changes of school and environment and so on" says Mrs Cooper.

On completion of her degree, Mrs Cooper worked as a school teacher, before returning to undertake a Master of Education at the CCAE, under the late Emeritus Professor Phil Hughes, Head of the School of Education.

During her time at UC, and since, Mrs Cooper has been heavily involved in the UC Community. At one stage she was contributing to five committees, on a voluntary basis, including the University Council as the elected postgraduate student representative for nine years. She also Chaired the Convocation committee, where her crowning achievement was the introduction of the Canberra International Film Festival, which has grown into an internationally recognised event today. Mrs Cooper was also involved as a member of the Student Welfare Committee, the Board of International House and other review and appointment panels of the university.

Mrs Cooper's grandchildren Dylan Cooper, Jennifer and Peter Edmunds are also graduates of UC. Dylan completed a Bachelor of Information Management in 2000, Jennifer a Bachelor of Applied Science in Architecture in 2006 and Peter a Bachelor of Communication (Honours) in 2005, where he was awarded the University Medal. Peter went on to found web design company Oxide Interactiv with fellow UC alumnus Alexi Paschalidis.

Unfortunately Patricia passed away in 2015, but will always be part of the University of Canberra with on campus student residence Cooper Lodge named in her honour.