UC leading the way in eliminating gender and diversity bias

The University has gained the internationally recognised Athena SWAN Institutional Bronze Award as part of the Science in Australia Gender Equity (SAGE) initiative.

The award celebrates success, while recognising the University’s ability to reflect on its current state and to putting in place actions to take it further.

It was granted based on a submission oversighted by a committed group of academic and professional staff from the University who delved into our data, policies and practices to highlight our successes, as well as opportunities for improvement.

The findings of the submission process included many areas where UC is excelling in its journey to gender equity, including that (at time of submission), three of the six senior executive roles are held by women, 51 per cent of STEMM academic staff are female, and 46 per cent of senior leaders are women. 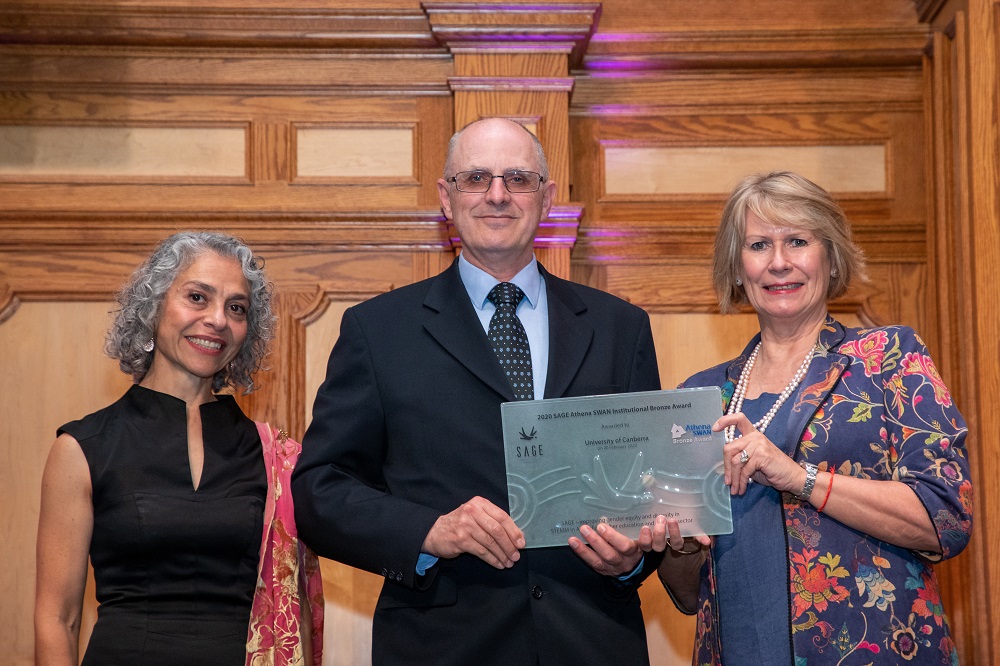 Deputy Vice-Chancellor & Vice-President Academic, Professor Geoff Crisp said the University is committed to putting our institution at the forefront of diversity practice and to ensure our workplace and community is more inclusive and supportive.

“The University of Canberra has had great success in the gender equality area. We are going to continue to focus on improving the number of women in STEMM by further normalising career breaks, the parental care responsibility for men and women, and flexible working arrangements,” said Professor Crisp.

Professor Crisp said one of the major benefits of participating in the SAGE accreditation was the process itself.

“It allows institutions to be able to dive into their organisation, look at their data, policies and practices to confirm if there is inequity or issues around inequity, and to do something about it,” said Professor Crisp.

While initially focused on a commitment to advancing the careers of women in STEMM disciplines, the Athena SWAN charter now recognises a broader definition of gender equity including trans and gender diverse individuals.

“The SAGE initiative allows the University to be more inclusive and allows us to recognise things that are beyond the simple gender issues,” said Professor Crisp.

The University is open to self-reflection and strives to work harder in this area and has developed a four-year action plan to ensure continued improvement and success.

The University joins 45 Australian higher education and research institutions who have completed the SAGE pathway to accreditation.