Centre director Jerry Watkins speaks to Contentgroup about the findings and implications of the Digital News Report.

Digital News Report in the Media

The Digital News Report: Australia 2015 has received coverage in the media, including an interview with Matthew Ricketson, one of the authors, on ABC Radio National's The Media Report.

Online articles on the report's findings have been published on Guardian Australia, the Sydney Morning Herald and ABC News . 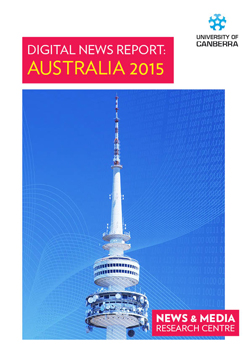 The first-ever Digital News Report: Australia provides a clearer picture than ever before of how the Australian news consumer is similar to and different from 11 other countries surveyed: Denmark, Finland, France, Germany, Ireland, Italy, Japan, Spain, UK, USA and urban Brazil.

It is the first in a series of annual reports which will track changes in news consumption in Australia over time – particularly within the digital space – in order to understand how offline and online media are used together. A particular emphasis is on news discovery via social networks, and news consumption via mobile devices.