Conversations About Alcohol and Pregnancy:

ACT launch of 'Women Want to Know': Conversation about alcohol and pregnancy from FARE on Vimeo. 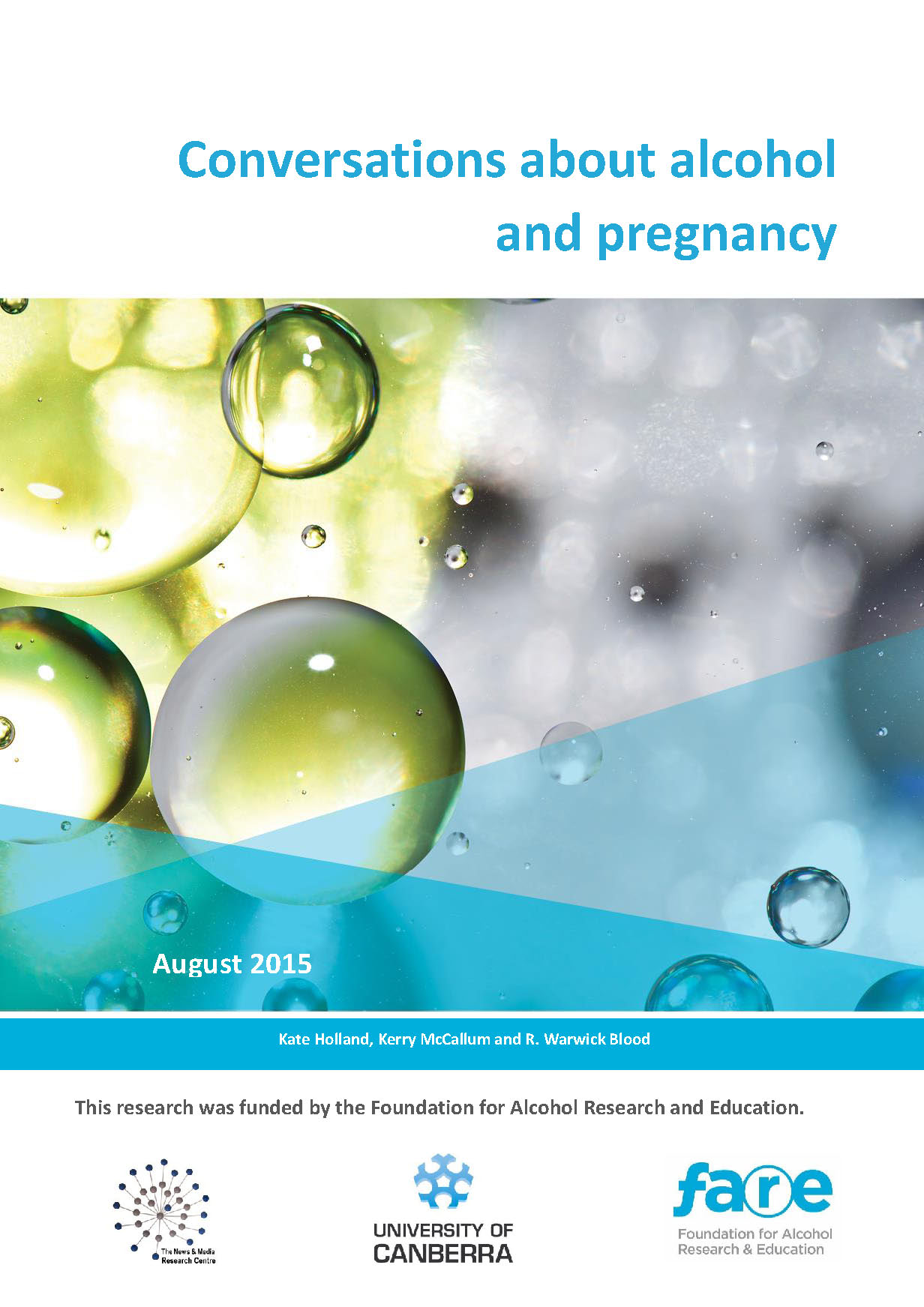 The project examined media reporting of alcohol consumption and its risks during pregnancy and how Canberra women understand the issue and manage and apply different types of information about it, including media reporting, expert advice and public health guidelines. The research highlights women's situated knowledge as a vital part of the public conversation about alcohol and pregnancy.

Five key frames were identified from the analysis of 110 media items. These frames were: 'contested evidence and advice', 'FASD crisis', 'blame risk-taking mothers', 'women's rights', and 'community responsibility'. The dominant frame was 'contested evidence and advice', which highlighted contradictory medical advice and research findings. Such stories were typically sourced to new published research variously highlighting evidence of harm or no harm to the fetus from alcohol consumption.

Interviews with 20 Canberra women revealed variable experiences and responses to media reporting and public health guidelines about alcohol consumption during pregnancy. Women's views paralleled the polarities of the 'contested evidence and advice' frame identified in the media analysis. Some women discussed uncertainty surrounding its potential impacts, including fear of FASD, as part of their reasoning for abstaining from alcohol, while others were of the view that the occasional drink was acceptable and not going to be harmful. Some women emphasised the importance of listening to their own bodies and being comfortable with having a drink if they felt like it. Some women viewed the abstinence public health advice as a responsible message, while others interpreted it as an example of policing women through guilt.

The research findings are situated in the context of the 2009 NHMRC alcohol guidelines; increasing concern about Fetal Alcohol Spectrum Disorders (FASD); concern that some women continue to drink during pregnancy; increasing media attention to women's drinking; ideas of 'good' and 'bad' mothers; risk as a dominant discourse surrounding pregnancy and motherhood; media as a source of public understandings about alcohol risks and control policies; and variable information and advice available to women about the risks of drinking alcohol during pregnancy.

The report is available for download via this link.

Dr Kate Holland is a Senior Research Fellow in the News and Media Research Centre at the University of Canberra. Kate has expertise in qualitative research into media reporting and public understandings of a range of health issues, including overweight and obesity, infectious diseases, and mental health issues. She is currently working on an ARC Discovery Early Career Researcher Award (2014-2016) 'Mediating Mental Health: An Integrated Approach to Investigating Media and Social Actors'.

Dr Kerry McCallum is Associate Professor of Media and Communication and Senior Research Fellow in the News and Media Research Centre at the University of Canberra. She recently completed an ARC Discovery Project 'Australian News Media and Indigenous Policymaking 1988-2008'. She has expertise in qualitative interviewing and analysis and particularly the relationships between news media representation, mediatised practices of policymakers, journalists and policy advocates, and their combined impact on policy outcomes.