Misinformation and disinformation and their effects are complex and interwoven with countless socio-political and psychological issues. The Australian Perspectives on Misinformation, the Critical Conversations Lab’s inaugural report, brings together several sources of data and a wide array of points of view, highlighting the Lab’s networked approach to the research process. The background of the report is the results from two existing N&MRC reports: Digital News Report: Australia 2020 and COVID-19: Australian News and Misinformation report, both of which tracked perceptions of misinformation in the Australian news consumers in 2020. The report next profiles two case studies: an analysis of campaigns by Russian Internet Research Agency “troll” accounts on in the Australian Twittersphere in the leadup to the 2016 Australian Federal election, and an interview with a young ABC Digital journalist about how misinformation affects her work practice. The final chapter replaces misinformation in a historical context and reviews psychological and networked communication approaches to countering it. The report also features expert comments by three leading Australian journalists and researchers. Finally, the report relays a set of practical messages to help teachers and politicians communicate about information literacy and outlines a series of hypothetical steps for how people might establish a fact-based common understanding with a conspiracy believer. 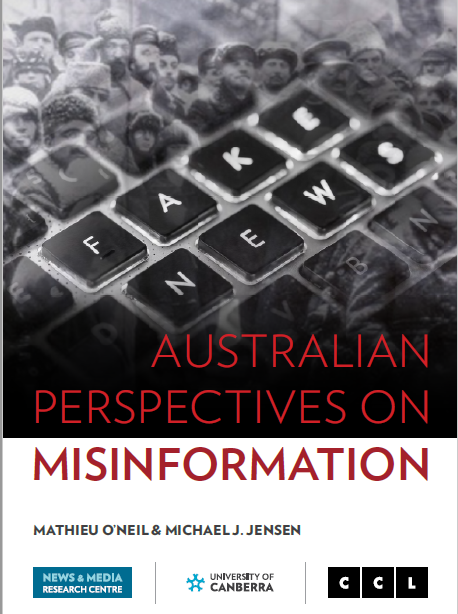 Mathieu O’Neil is Associate Professor at the News & Media Research Centre where he leads the Critical Conversations Lab and Honorary Associate Professor of Sociology at the Australian National University. He conducts network and content analyses of environmental and health controversies in the online environment and also researches commons-based peer production, most recently thanks to a Sloan and Ford Foundations Critical Digital Infrastructure grant. He is the lead editor of the Handbook of Peer Production (Wiley Handbooks in Communication and Media, in press).

Michael J. Jensen is Associate Professor at the Institute for Governance and Policy Analysis and a core member of the News & Media Research Centre. He has a background in political communication and has published books with Cambridge University Press and Palgrave on online political behaviour. His work concerns the use of digital communication technologies in the development of new forms of political organization within political campaigning and protest movements.

1. Divided they perceive: Australians and misinformation

Commentary: A few words on misinformation and media

2. Internet Research Agency campaigns in the Australian Twittersphere: Excerpts from Submission to the Senate Select Committee on foreign interference through social media

Commentary: The social media infodemic and the “filter bubble” fallacy

The report was launched in the presence of the authors and contributors on November 11, 2020 as part of the Faculty of Arts and Design #FADfest20.

Mathieu O'Neil appeared on ABC's Late Night Live with Philip Adams on November 18, 2020, in a segment called “Fact, fiction or fake: How Australians perceive their news.”