13 October 2022: The 25th edition of the anthology of creative writing from University of Canberra students, titled Crossroads, was launched this week at an event featuring Manchester Poetry Prize winner, Peter Ramm.

The book, which contains poetry, short stories, excerpts from television and film scripts, and graphic art, is made up of the creative works of students from across the University’s five faculties.

The group of contributors – many of whom have never been published authors before – attended the event and participated in a reading of their works.

“It’s been a real hands-on experience for the students involved in Crossroads, who have not only created the pieces included in the book, but have experienced the processes of putting a publication together,” said Dr Paul Magee, Associate Professor in Arts and Communication and Discipline Lead for Creative Writing at the University.

“Students led each stage of the anthology’s production, which involved time, attention, care and creativity.” 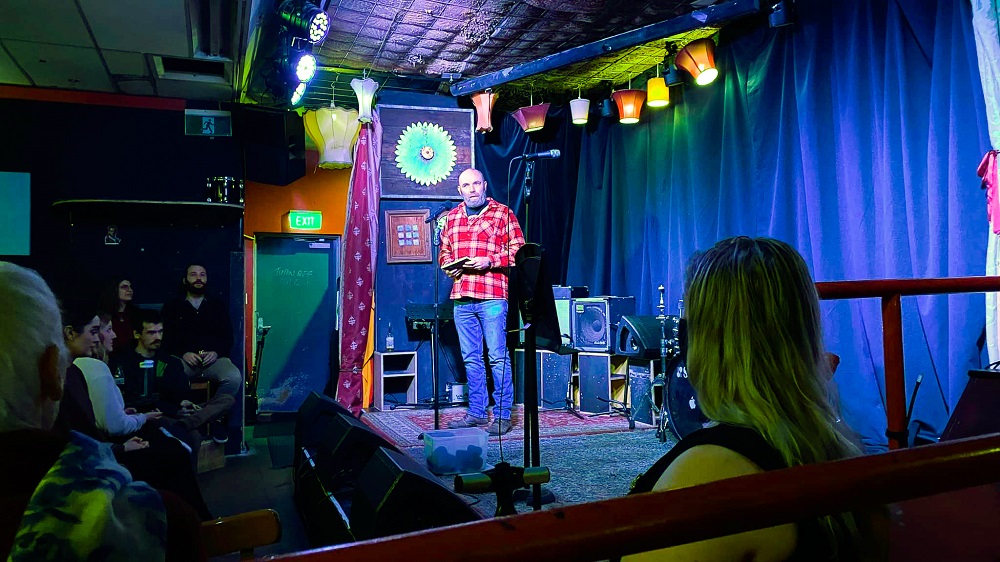 Masters of Secondary Teaching student and Student Experience Officer for the Faculty of Arts and Design, Tom Fiander, had his poem featured in the book.

“My poem shines a spotlight on some unspoken history of the mistreatment and exploitation of Indigenous women in Western Australia, who suffered under the practice of ‘blackbirding’,” Mr Fiander said.

Blackbirding involves the coercion of people through deception or kidnapping to work as slaves or poorly paid labourers in countries other than their native land.

Mr Fiander’s poem particularly refers to the Women of Pearling monument that overlooks Roebuck Bay in Broome, and includes a reference to the inscription, containing a poem by Thomas Moore.

He said the poem is intended to raise awareness of the issue.

“The poem shines a light on some of Australia’s dark history – and to see it published in a book stirs a great sense of fulfilment and achievement – not just for myself but for the history behind the poem,” Mr Fiander said.

Mr Fiander was one of many students who attended the launch event at Smith’s Alternative Bookshop on Monday night, and said it was “inspiring to see academics and staff in attendance to support the work of their students”.

In the lead-up to publication, students acted in the roles of Lead Editor (Jessica Boaden), Co-editor (Laura Monaghan), and Assisting Editor (Lucy Monaghan), who sourced the contributions, made the selections, and copy edited the text.

Other students within the anthology committee contributed to the design of the book, and the promotion and advertising for the launch event.

Crossroads features 33 pieces of work and copies can be purchased by emailing paul.magee@canberra.edu.au.