Emeritus Professor Aitkin passed away on 12 April of this year. He was 84.

The memorial service was held at the Anne Harding Conference Centre with Jesse Newton as Master of Ceremonies. Mr Newton is Emeritus Professor Aitkin’s grandson, and is studying for a Bachelor of Politics and International Relations at the University. 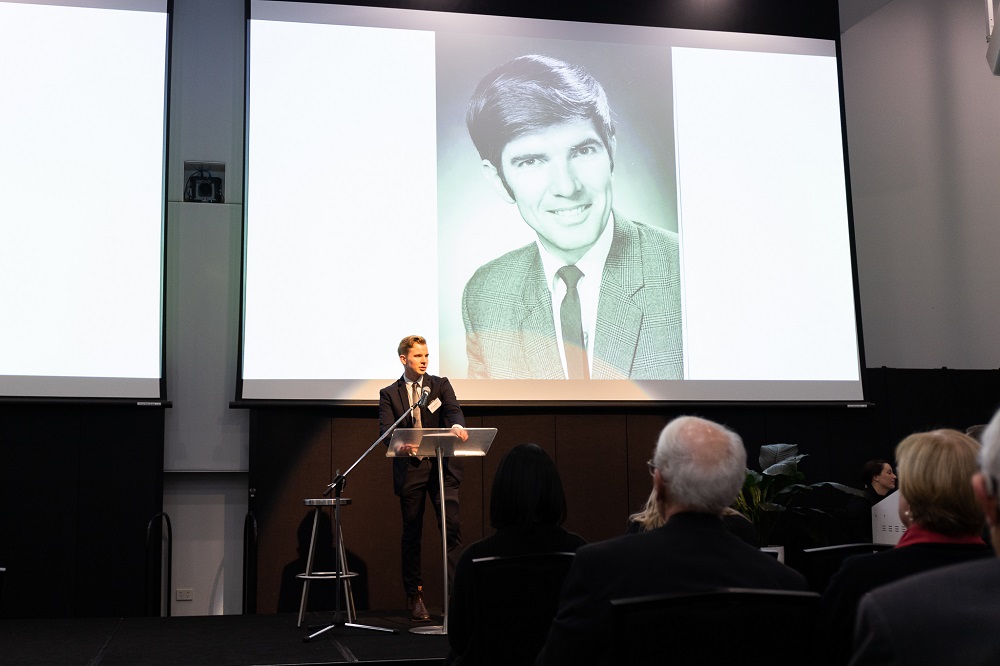 The service was attended by many of Professor Aitkin’s family members, friends, former colleagues, and prominent figures from across Canberra, including University of Canberra Chancellor Professor Tom Calma AO, former University Chancellor Wendy McCarthy AO, Senator the Hon Katy Gallagher, The Hon Dr Andrew Leigh MP, former Chief Minister Kate Carnell AO and The Hon Margaret Reid AO – all eager to celebrate the life of a man who had lived his life in service to many.

This included his time as the University of Canberra’s Vice-Chancellor and President from 1991 — 2002, and prior to that, serving as Chair of the Australian Research Council in 1988.

Upon his retirement in 2002, Emeritus Professor Aitkin was appointed chair of the ACT Government's Cultural Facilities Corporation. This was in addition to his role as the chairman of the NRMA-ACT Road Safety Trust, which he assumed in 2001.

In 2008, he became the Chair of the National Capital Authority, the federal body that oversees the capital’s planning. He was also the Chair of the Canberra International Music Festival. These were just some of the roles in which he served the Capital and its community. 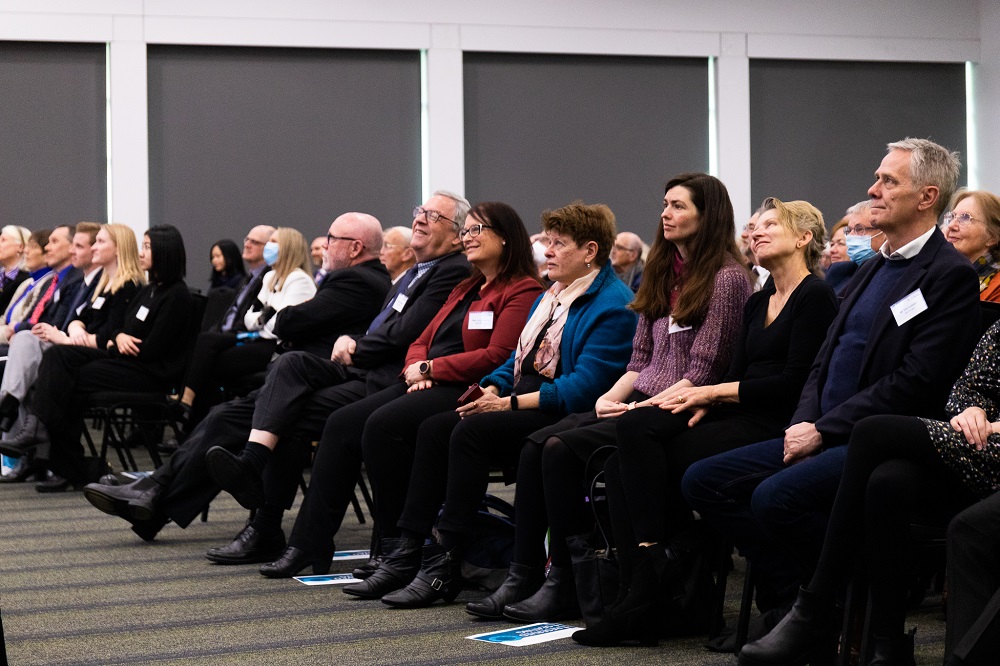 University of Canberra Vice-Chancellor and President Professor Paddy Nixon paid tribute to one of his earliest predecessors, as an “elder statesman of the University”.

“Don was the Vice-Chancellor of UC from a year after it became a university – from being the Canberra College of Advanced Education – till his retirement,” Professor Nixon said. “Ever since the news broke of his passing, there has been an outpouring of condolence messages, stories shared, and praise for him from the community.”

He added that even after his retirement, Emeritus Professor Aitkin remained strongly connected to the University, engaging as an adjunct member of staff and a valued contributor.

“He was a visionary leader – ahead of his time – and situated UC within the regional, national and international scenes. We owe him much and will continue to honour his legacy in all that we do – teaching, research and administration – as well as continuing the annual Don Aitkin Lecture in his memory.

“Last year, I was honoured to welcome Don and some of his family to Bimbimbie, the VC’s residence – it was wonderful to meet him, to be able to chat about UC, and even share our love of science fiction! Don later sent me many photos of Bimbimbie as it was being built, as he oversaw its construction.” 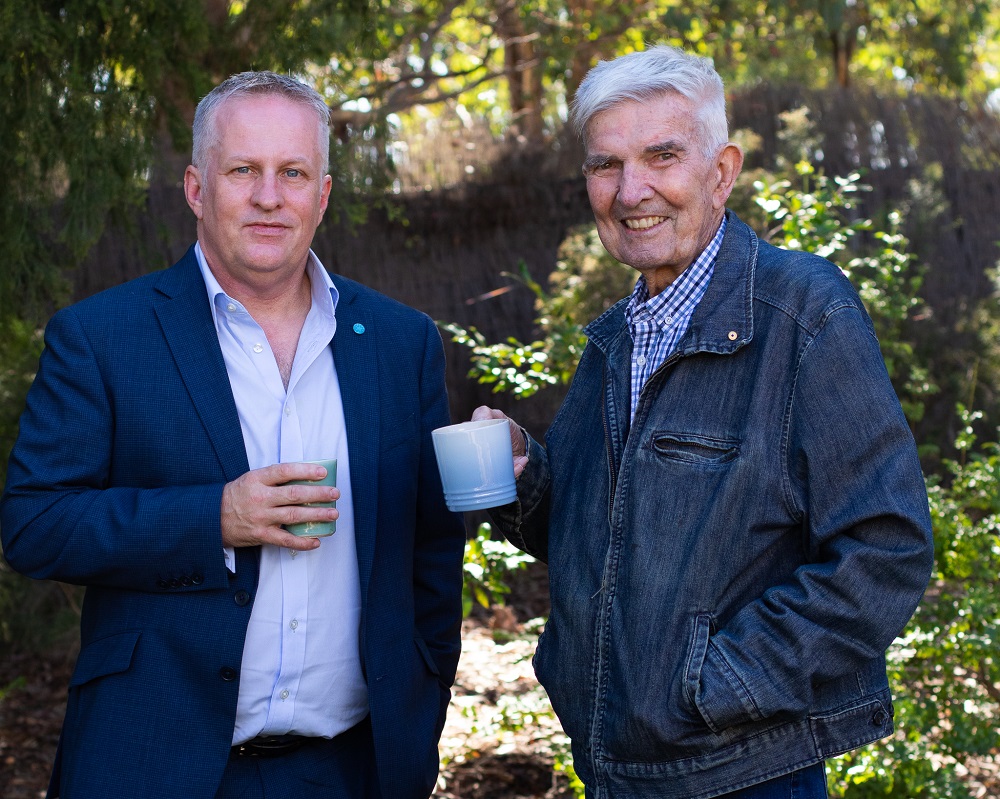 In her eulogy, Susan Aitkin – one of Emeritus Professor Aitkin’s nine children – touched on her father’s remarkable and enduring relationship with the University.

“During their lives, Dad and his wife, Bev, both had a deep connection to Canberra and to this University,” said Ms Aitkin.

To honour the spirit of that connection and their family’s unwavering belief in education, the Aitkin family nominated the UC Student Empowerment Fund for donations in lieu of flowers when Emeritus Professor Aitkin passed away.

“Dad’s own father, Alec, grew up in Broken Hill, the second of eight children. Alec worked at the Surveyor’s Office on the South Mine after he finished school, while studying towards a Mining Engineering Diploma,” Ms Aitkin said.

“He finally won a Teachers College Scholarship … each academic year ended with him back in the South Mine to earn funds for the next year. In his final year, his dad lent him £20 so he could study for his distinction exams during the holidays.”

“That loan of £20 got him through his degree. Our family hopes that the UC Student Empowerment Fund can give other students the same chance that Alec was given.”

Emeritus Professor Don Aitkin lived a remarkable life – and left an equally remarkable legacy. To read more about it, go to our UnCover story.