14 May 2021: The National Centre for Social and Economic Modelling (NATSEM) at the University of Canberra has analysed the 2021 Federal Budget and found that mid to high income earners are among the winners.

NATSEM’s Budget Analysis has found that the extension of the low and middle income tax offset (LMITO) actually benefits higher income families, as low income families often do not earn enough to benefit from it.

The report suggests that the childcare subsidy increase will also benefit mid and high-income families given higher childcare use by about 40 per cent and how that would impact the activity test requirement.

The activity test is used to determine the number of subsidised childcare hours a family is entitled to per fortnight.

“To claim the full benefit from the increased childcare subsidy, families will need to have an income of at least $129,000 a year, as the lower income families already claim benefits closer to the capped ratio,” said Professor Jinjing Li, who runs NATSEM’s tax modelling.

If childcare prices rise due to the increased demand, families with a single child or lower income may even lose out.

The removal of the cap of childcare subsidy also favours high income families. 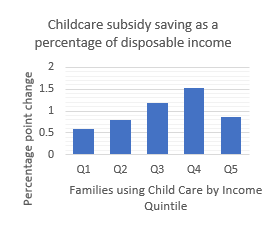 “Overall, the impact of the proposed tax transfer policy change in this year's budget is small compared with the likely impact of the 2024/25 tax cut, which will substantially benefit the higher income groups,” said Professor Li.

NATSEM’s report has also analysed the home guarantee scheme, under which the government has lowered the downpayment required for eligible households, and its impact.

The finding from the analysis suggests that there could be up to six per cent of potential renters interested in the scheme based on their current savings. However, the percentage is lower at 4.3 per cent for single parents, despite more generous support. Critically, for most of them, the potential mortgage repayment would be higher than their current rent.

The full analysis can be found here.