2 October 2019: Close to 30 Early Childhood Education students at the University of Canberra swapped the classroom for the outdoors this week, to run a loose parts pop-up playground for the local community.

The students organised and facilitated the pop-up playground at John Knight Park in Belconnen for children aged four to eight, as part of their course work for the Philosophies and Pedagogies in Early Childhood Education unit.

“We are doing an assessment task about what is important about play, and the adulteration of play,” said student Tegan Lorkovic.

Loose parts play is a concept that originated in Denmark.  It involves equipment that doesn’t have a specific purpose, with no instructions on how to use it. Loose parts can be a collection of any natural or man-made materials; it’s a type of play that supports children’s creativity, divergent thinking and problem solving.

“A cardboard box is one of the best things that you could give to a child to play with, because they can do so much with it,” said MsLorkovic.

“They can paint it, tape it, cut it, or build a house out of it. It is an equipment of play that has no guidelines.” 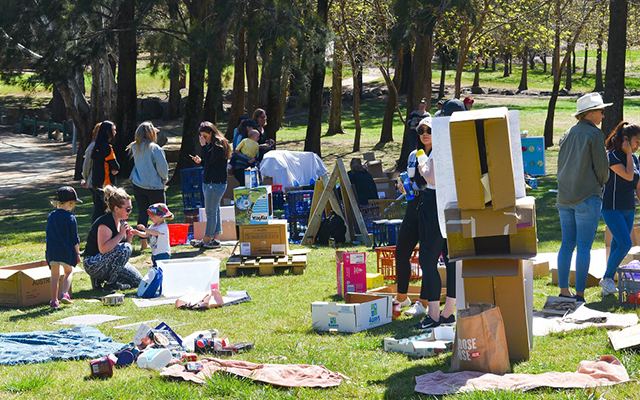 Associate Professor of Early Childhood and Primary Education Dr Kym Simoncini, said they used the project to advocate for why play is important, and how easily it can be facilitated without expensive toys.

“Just let the children play, give them time and space and you will see that they are capable of using their imagination with milk crates and sticks. We don’t need expensive toys,” said Dr Simoncini.

Ms Lorkovic said it was interesting to see how parents and guardians engaged with the children and led them to make decisions they thought were best.

“The whole point of this experience was so the parents didn’t do that. The children can lead their play and create their own experience.”

Over the years of doing this exercise, Dr Simoncini has noticed how much it benefits not only children, but the students as well.

“But after facilitating the playground, students realised that the children were using problem-solving skills, were working with others and using language, creativity and imagination.”

Dr Simoncini said it is easy to facilitate loose parts play at home – all parents need are odd bits and bobs.

“Kids will find a way to make something out of nothing by using their imagination. It can be anything they want.”