25 May 2022: The University of Canberra conferred a posthumous award of Honorary Doctorate of the University to Sue Salthouse AM today, in recognition of her distinguished service to disability advocacy, especially for women, and contributions to the Canberra community.

This is the first Honorary Doctorate conferred posthumously in the University’s 32-year history. It was presented at a ceremony attended by members and former members of the University of Canberra Council, senior staff, ACT Government officials, and family and friends of Ms Salthouse.

A former member of the university Council (2012-2018) and a generous donor to the University, Ms Salthouse worked tirelessly for social justice, driving change, and better opportunities and accessibility for people with disability in Canberra, particularly women. 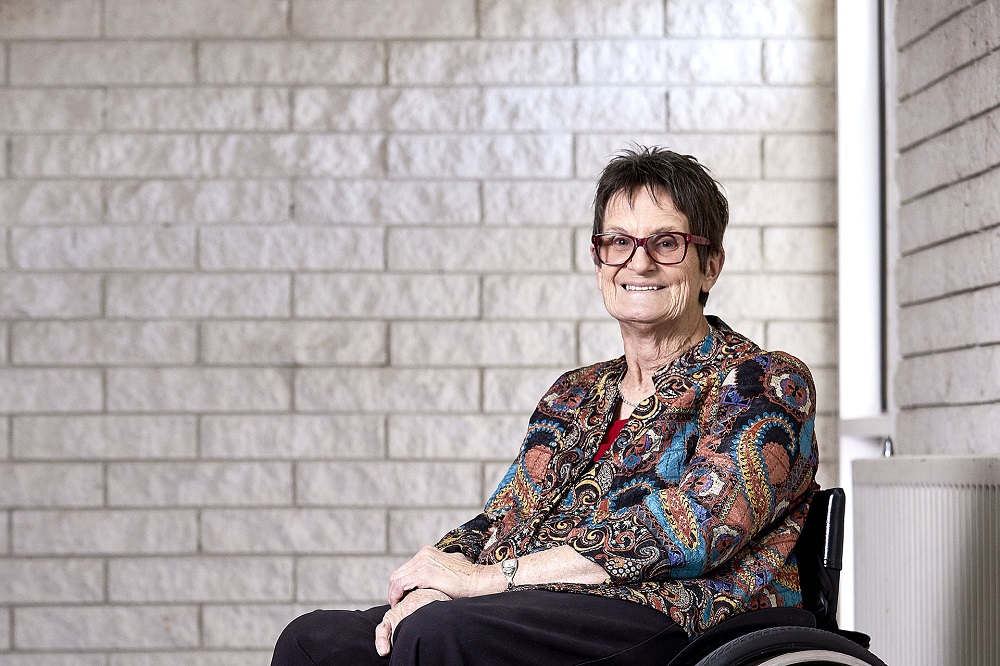 Ms Salthouse passed away in July 2020. In 2022, she was posthumously honoured as a Member in the General Division of the Order of Australia.

“Sue Salthouse was a true icon of the Canberra community, and someone whose legacy will resonate for many, many years to come,” said Professor Paddy Nixon, Vice-Chancellor and President of the University.

“It’s an honour for UC to be able to recognise her dedication, service and commitment to others, whether by supporting individuals through difficult times, mentoring young and emerging leaders or by working for systemic change at local, national and international levels to promote and advance the rights and freedoms of women with disabilities.”

“She was an amazing connector – a mentor and friend to many, a large part of Sue’s legacy lies in the many lives she touched. She held many hands to help people step into leadership roles – even those who never thought they were leaders,” he said.

After completing a degree in agricultural science in her home region of Melbourne, Ms Salthouse first worked as a field officer with the Victorian State Rivers and Water Supply Commission, before completing a Diploma of Education and becoming a primary school teacher.

“Mum was very grateful for her own education, and was therefore a huge believer in access to education across all levels – pushing for those opportunities for all formed a large part of her body of work,” said Luisa Fearnside, Ms Salthouse’s daughter.

In 1995, Sue met with an accident while horse-riding – as a result, she used a wheelchair for the rest of her life. As one of Canberra’s foremost advocates for people living with disability, she then combined her own lived experience with a strategic, data-driven approach, to effect real change in the disability sector.

Ms Salthouse became the Chair and then President of Women with Disabilities Australia (WWDA).

She ran her own consultancy company and conducted social research and policy analysis in the disability sector, as well as developing and delivering training on supporting victims of domestic violence.

“She was the first person to gather and make sense of data on how men and women with disabilities received NDIS funding,” said Ms Fearnside.

“Mum noticed a gap in the information and opportunities available for people with disability, and when Women with Disabilities Australia invited her to look at that, she identified many opportunities that hadn’t yet been seized.”

Ms Fearnside says that Ms Salthouse was always driven by her belief in a better world.

“Mum’s belief in the power of humanity to make the experience of living in this world better, was present in everything she did,” she said.

“And she truly believed in Canberra, that it could be one of the best and most progressive places to live and work, and she pushed for that with her work.”

Ms Salthouse’s family will continue to drive her legacy.

“The family is genuinely grateful that UC is recognising her this way, and we are so proud to be part of her legacy,” Mr Fearnside said.

Ms Salthouse regularly supported a scholarship for University of Canberra students, and this year, the newly-named Salthouse Leadership Scholarship for Women will see applications open in September.

The scholarship will support a female student with a physical, sensory or other disability and/or chronic health condition in any year of an undergraduate degree.

Last year, the ACT Government also announced the Susan Salthouse Leadership Fund, which will assist people with disabilities to pursue leadership roles. Hands Across Canberra will administer the funding, with distribution overseen by an advisory group including family representatives and ACT disability organisations.

Visit UnCover to read a 2019 feature about Ms Salthouse.