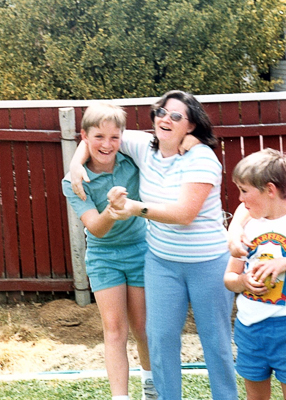 Lyn strives to make a difference and this underpins her involvement in the Foundation, her empathy for students, and the need for a balanced study, work and family life.

In 1971, when she commenced her studies at CCAE, she was the first from her family to attend university and was one of very few women in her course. The world was a different place then, and she found herself regularly primed by society in general not to expect too much in the workforce due to her gender. One manager even told her explicitly, that because she was female, she was being unrealistic if she expected to be promoted because "we can’t have girls giving orders to men…".

None of this feedback seemed to slow her down, and Lyn commenced her undergraduate degree while working at the Department of Defence (DoD) and completed it while taking a break from the workforce to raise children. DoD provided generous study leave at the time, and this, combined with CCAE’s flexible part-time study options, meant she could manage her work and university obligations. Without the flexibility offered by her workplace and the University, studying would have simply become impractical and out of reach.

Lyn has fond memories of the on-campus childcare facilities and was even Vice President of the creche at one point. CCAE was accepting of kids being the reality of everyday life for some students, and everyone was made to feel welcome. "There were many times when I would take one of my children to evening classes, but never two!" she laughed. "Two would be far too noisy at the back."

Some of those evening classes must have made quite an impact on at least one of her children, who also studied at UC and has gone on to become a successful criminal lawyer.

Lyn didn’t stop at a professional career, children and an undergraduate degree. After some time away from work to be with her children, she returned to her career in information technology and advanced to a middle management position. During this time she worked in several government departments and led a number of teams with a total of about 20 staff at one stage. She then decided to hit the books once again at UC where she completed a Masters of Business Administration (MBA). She felt that her MBA definitely contributed to her ability to lead a large team and contributed to her success in the role.

Lyn is a generous donor to the UC Foundation Scholarships Fund where she continues to lend her support to enable others, especially women, to study when they might not have had the means to do so.

"I remember the difficulties I faced balancing work, study and being a mother. My hope is that by supporting UC students in this way, I can help them reach their potential."

Now happily retired, Lyn is loving spending time with her Tibetan terriers but continues to take great interest in the achievements of students succeeding against the odds. She is part of what makes our UC Alumni such an integral part of our community.