Behind the Scenes of a Midwife

The 2019 ACT Midwife of the Year Award recipient began her career with zero interest in childbirth or maternity health.

Sally McRae’s journey to the top of her profession has been anything but predictable.

Beginning her working life as a hospital-trained student nurse, Sally spent four years at the Royal Hobart Hospital. She completed her graduate year, then commenced a Bachelor of Music (Hons, pianoforte) at the Tasmanian Conservatorium of Music, with a vague plan to become a music therapist. Life quickly took over, and she spent the next eight years working as a successful pianist and conductor in Canberra.

It wasn’t until Sally had her first child that she considered returning to health.

“I was incredibly inspired by the amazing midwives I was lucky enough to meet. That’s what started the thought process of returning to work in the health industry where I knew I could make a difference,” reflected Sally.

After upgrading her nursing qualifications, she enrolled in the Graduate Diploma of Midwifery and in 2017 she also completed a Masters of Midwifery at UC “an intense but worthwhile decision!”

I go home every day knowing I’ve done something useful, in some small way, for someone. I get to walk alongside and support women and their new families on their pregnancy, childbirth and postnatal journeys.

She has worked most of her career at Calvary Hospital in Bruce, where she has helped develop a Parent Education Program to support new parents through the period of significant change and better engage with them away from the clinical setting of the hospital. The Program includes a variety of women-centered workshops on subjects ranging from maternity care (including pregnancy, labour and birth), the early postnatal period, breastfeeding, and parenting and beyond. 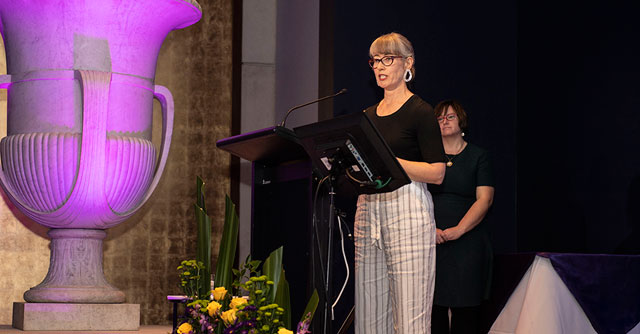 As part of her busy role, Sally is currently the Clinical Development Midwife at Calvary, where she supports new graduates to develop their skills and confidence in the clinical environment. She advocates for graduate midwives to provide individualised, empathetic and informed care to women and their babies that is compassionate and woman-centered.

Women are strong and awe-inspiring, and every woman’s journey is different. I get great enjoyment from being surrounded by that every day.

Sally has many career highlights but one of the most profound moments she experienced came after helping a woman through a very difficult labour.

“It was her third baby and the labour was unexpectedly long and difficult. Her mother, who spoke very little English, sat in the corner of the room watching me, and I was concerned she might be doubting my competence given the difficulties the woman was having. Suddenly everything changed and the baby came quickly, and all was well. The woman’s mother came over to me, wrapped me in a bear hug, and with her few words of English and a lot of sign language told me I was now also her daughter, I had become a member of her family. It was a wonderful moment of human connection that I’ll never forget.”