Back to the Futuro 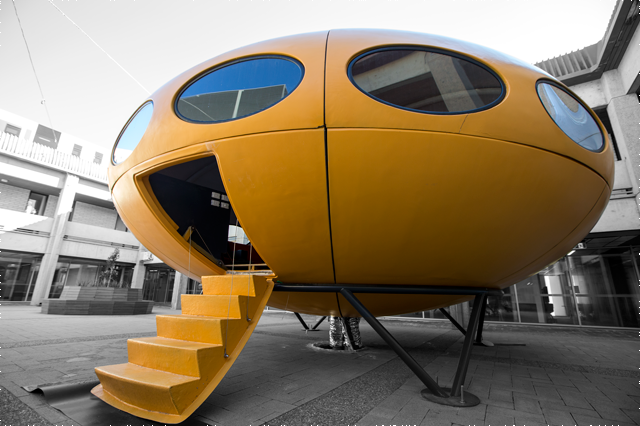 There have been many changes to the Bruce campus since the laying of the foundation stone in 1968. Even for more recent graduates many of the modern, state-of-the-art buildings that now dot the campus would be unfamiliar.

Among those is a very curious building, whose own story is as mysterious as its design and location. From its first "landing" on campus outside building 10 in 2011, to its restoration and relocation to the newly renovated building 5 in 2014, UC's Futuro has become one of the campus' biggest attractions and talking points.

What is the Futuro?

Contrary to many conspiracy theories the Futuro is not a crash landed UFO. It's also not a sculpture, work of art or bizarre social experiment.

The Futuro – believe it or not – is a house.

Designed in the late 1960s by Finnish architect Matti Suuronen in a time of unprecedented technological and economic growth and with the backdrop of the space race, the Futuro reflected the excitement and optimism of the late '60s.

With leisure time increasing and travel more and more accessible to the public, Suuronen initially designed the Futuro House as a portable holiday home.

An early example of the use of plastics in prefabricated housing, the Futuro was easily transportable, easy to construct and could be placed in almost any environment. Sitting on only four concrete piers, it could be constructed on hills or slopes, and with the ability to be heated from -28 degrees to 15 degrees in as little as 30 minutes was perfect for ski locations and opened up the world to the possibility of "mobile living".

Able to be mass produced the Futuro was licensed to manufacturers in 50 countries around the world including Australia. The revolutionary design however wasn't to everyone's taste, and almost as quickly as it arrived the Futuro disappeared.

Public backlash over the Futuro's design plagued the project, with some protested and some vandalised. In the United States many municipalities banned Futuro houses because of zoning regulations.

In the end only about 90 Futuro homes were constructed around the world before the oil crisis of the 1970 made plastic prices too expensive for the project to be profitable and the Futuro home was taken off the market.

In the past 40 years however the Futuro has developed a life of its own.

Today there are only around 50 known surviving examples in the world, with even fewer fully restored. The transportable nature of the structures means that each has its own unique and exciting story to tell. Futuro homes have been used for everything from conference centres, meeting rooms, restaurants and even VIP rooms at strip clubs. There are also now even examples in museums and modern art galleries.

The Futuro's rarity and undeniable retro appeal has made them hot property among collectors, with examples being sold for hundreds of thousands of dollars even before transportation and restoration costs. 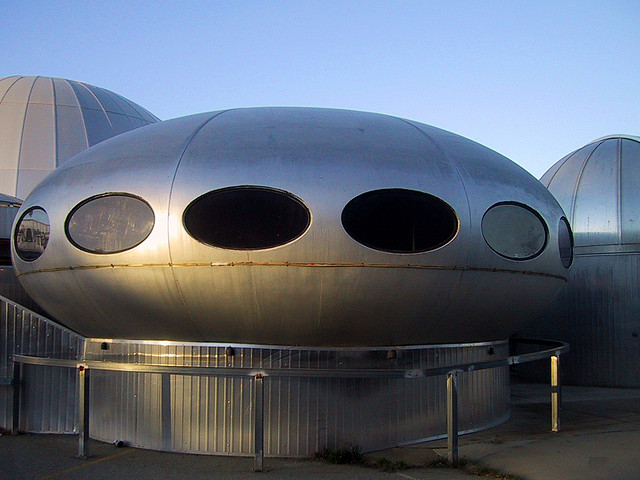 The history of UC's Futuro

The precise history of UC's Futuro is equally as mysterious as the Futuro project itself.

Believed to have been manufactured in New Zealand, the Futuro first arrived in Canberra in 1972 where it was displayed at the Building Materials Exhibition Centre in Fyshwick. From there it (or a suspiciously similar one), spent time in Kingston as a real estate office to help sell new developments, a farm in Sutton and the Macquarie Pool.

While much of the evidence around these locations is sketchy, we do know for certain that the Futuro- now painted silver- landed at the Canberra Space Dome (Planetarium) and Observatory in Dickson in 1997 (pictured above). Here it was used as a meeting room and for educational classes until the facility was closed in 2007 by owners the Dickson Tradies Club.

A fire on the now derelict site in 2010 would badly damage many of the buildings, however the Futuro luckily escaped mostly unscathed.

With the site of the Canberra Space Dome to be redeveloped, the Dickson Tradies Club sought expressions of interest for a new home for the Futuro. A perfect fit for the University's conservation and design programs, UC in consultation with the Finnish Embassy and National Gallery of Australia won their bid to become the new owners and home of the structure.

The Futuro was formally 'launched' at UC in March 2011 by the Ambassador for Finland in front of an excited audience of children from the Wiradjury Preschool at its new home adjacent to building 10 where it would stay until much needed restoration began in late 2013. 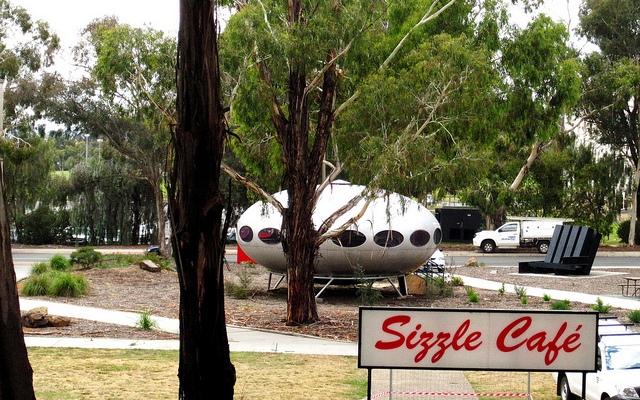 Restoring the Futuro to its former glory

Vandalism, smoke and water damage and general wear and tear had taken its toll on the now 41 year old Futuro. In need of a much needed spruce up it was broken down and taken to a workshop in Fyshwick where it was restored by industrial designers including UC Alumnus Jon Burchill.

The extensive restoration project included the removal and replacement of damaged structural elements, construction of a new floor structure, repairing of previous modifications, restoration and installation of the automatic door/stair structure and the application of the structure's original ochre-yellow paint.

Mr Burchill, a graduate of the CCAE's Industrial Design degree in 1980 told the Canberra Times in 2014, "When we first took it on, we really didn't know what was involved and it's been a voyage of discovery." 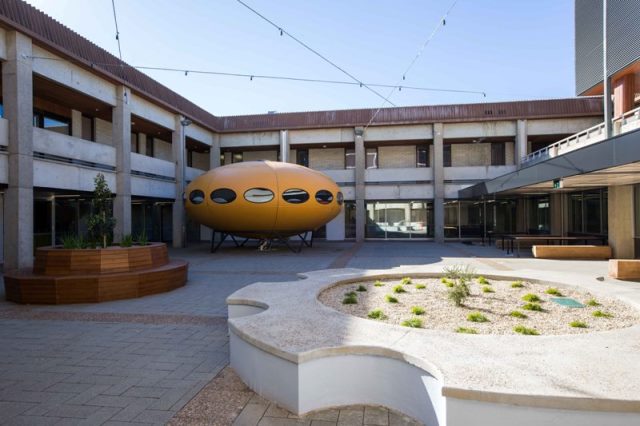 The Futuro finds a new home

With its new shiny paint and modern interior the Futuro returned to the Bruce campus in late 2014 to its new and permanent home inside the courtyard of the newly refurbished Building 5.

Officially opened by Chancellor Tom Calma and ACT Senator Zed Seselja, the Futuro is the centrepiece of the building's $9.9 million upgrade which includes state-of-the-art teaching spaces, an acoustic recording room, a refurbished courtyard and the new headquarters for the University of Canberra College.

Available as a study, meeting or tutorial space and complete with Wi-Fi, UC's Futuro is very much now the embodiment of the hopes and dreams and modern future imagined by those in the 1960s.

The great news for the public is that the Futuro is now in a space where it can be appreciated and admired, and if you're ever on campus be sure to drop by Building 5 to see UC's most mysterious and coolest building.

Campus
Back to top