8 December 2022: The annual University of Canberra Vice-Chancellor’s Excellence Awards took place on the Northern Concourse Lawns on campus this week, to acknowledge the outstanding contributions of staff in line with the University’s strategy, purpose and values.

Vice-Chancellor Professor Paddy Nixon said that it has been a busy year for UC and staff across the University.

“I am incredibly proud of the people who make the University of Canberra such an amazing community to be a part of. Today we recognise those who have excelled in their fields, but it is equally important to recognise the contributions of all our staff in what has been a big year for the University,” he said

“It’s also a fantastic opportunity for everyone across UC to come together and celebrate the year that was 2022, so we can step into 2023 with excitement and ambition.”

The University of Canberra congratulates all the winners and nominees of the Vice-Chancellor Excellence Awards for 2022. The winners are: 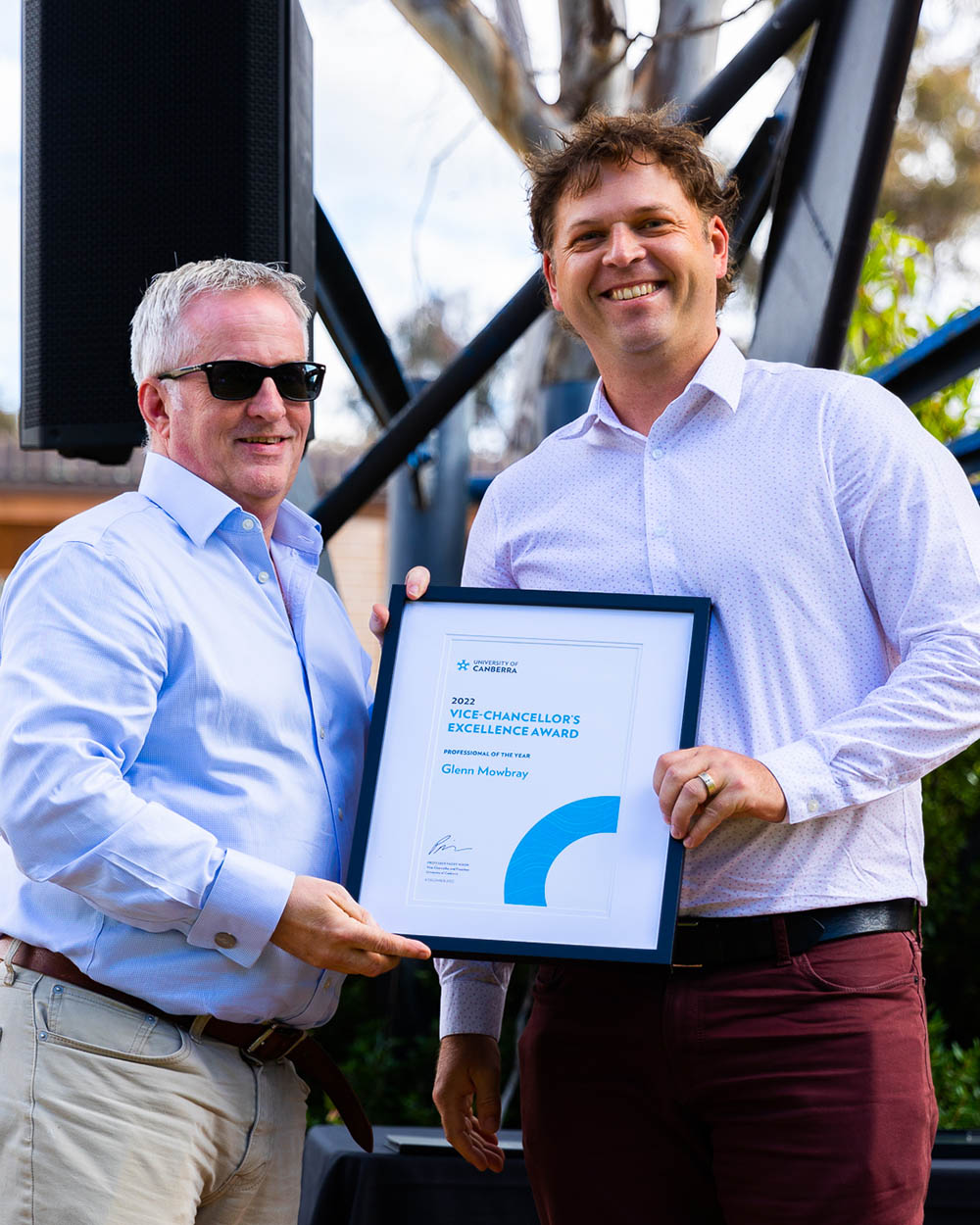 Mr Mowbray has pushed for excellence in several areas, both as a direct owner and as a supporter of significant initiatives.  In his external role as Chair of the Tertiary Education Facilities Management Association (TEFMA), Mr Mowbray has led the industry association through challenging times, to prove that the tertiary sector will continue to lead by example and commit to sustainability, collaboration, and international best practice.

With a number of initiatives underway in support of key University strategies, Mr Mowbray has provided outstanding support to the University Executive in making informed investment decisions and is a trusted adviser in these works in progress.

“I feel privileged to be able to work with so many inspirational thought leaders, intellects and brilliant people at UC, and am absolutely humbled that my contributions have been recognised at this years’ VC Awards. I am excited by the prospects ahead of us and look forward to achieving our Connected ambitions alongside the many that make our place such an enjoyable place to work,” Mr Mowbray said. 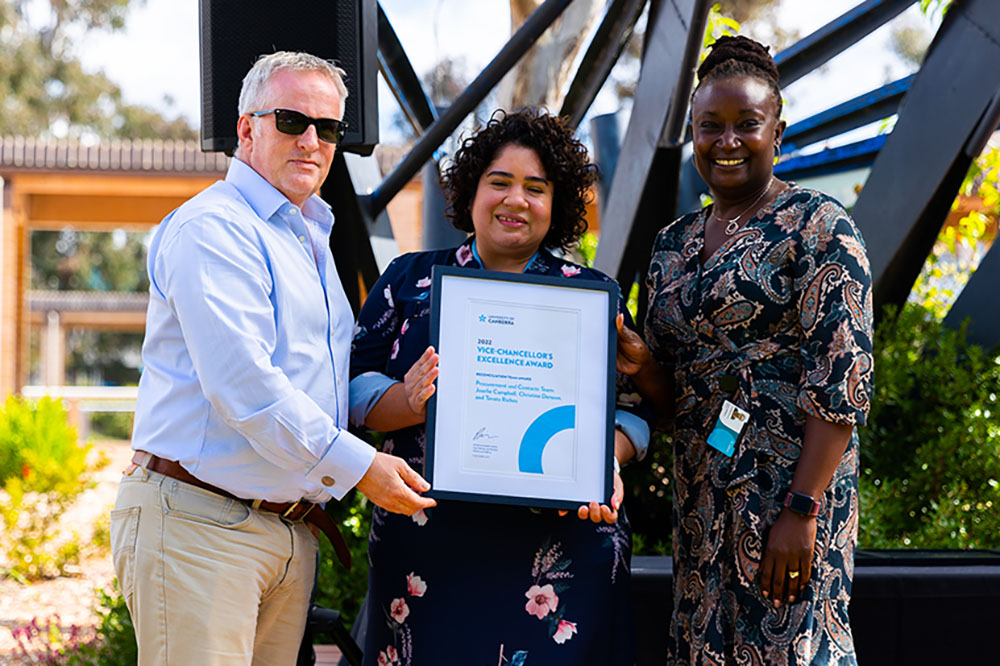 “This recognition is an additional impetus to continue with our vision, not only for the purpose of the University’s commitment to the RAP, but to positively impact the economic outcomes and experiences for our First Nations people, increasing employment opportunities, supporting workforce diversity and meaningful inclusion,” said Ms Denoon on behalf of the team. 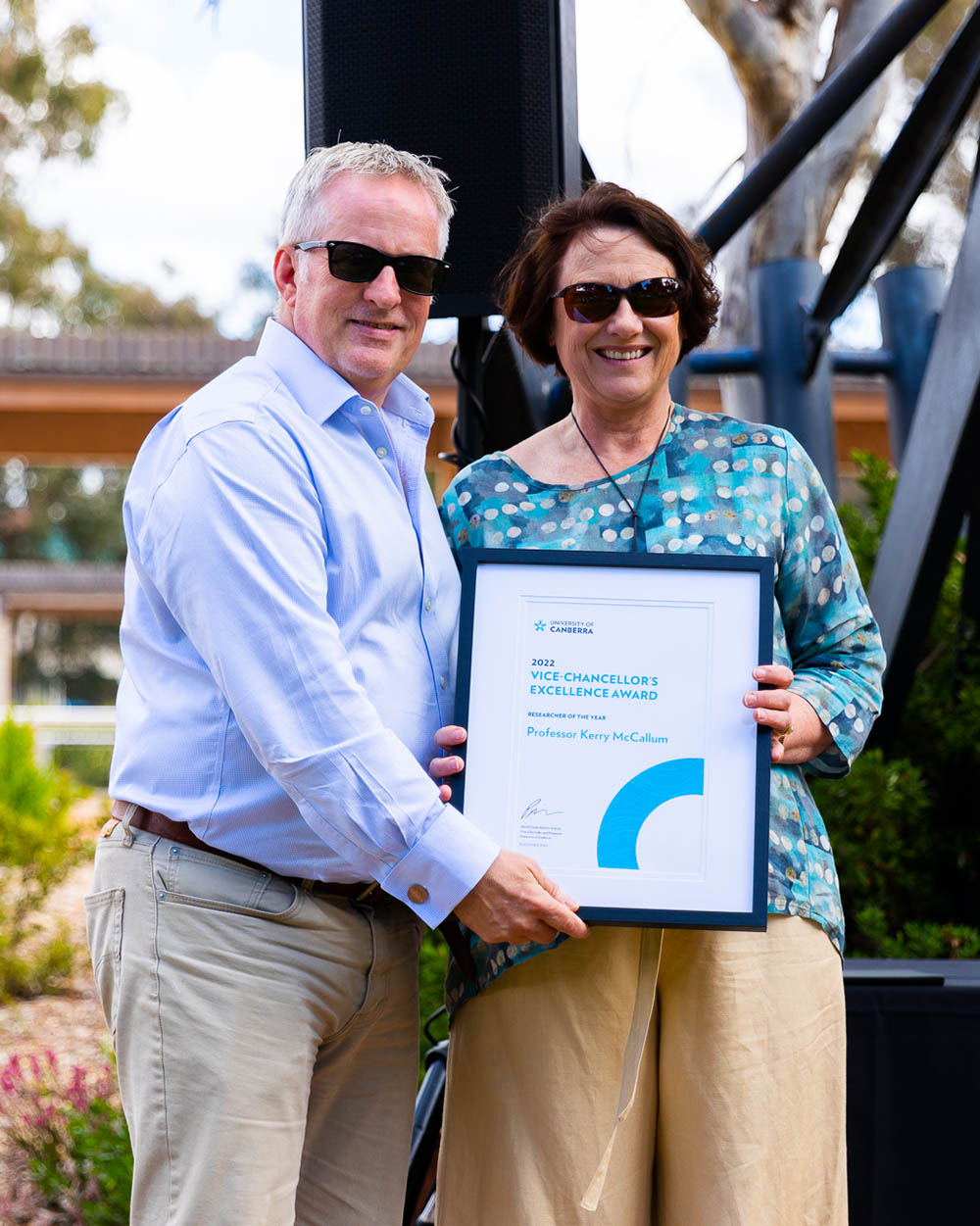 Professor McCallum, Director of the News and Media Research Centre in the Faculty of Arts and Design, has made outstanding contributions to the University through her research leadership, mentorship, supervision, and impactful research.

As the Chief Investigator on the ARC Discovery project ‘Breaking Silences: Media and the Child Abuse Royal Commission’, Professor McCallum has contributed to the first major Australian research that explores the nexus between media and commissions of inquiry in the digital era.

Recognised as a leader in the fields of communication and media studies nationally and internationally, Professor McCallum’s research epitomises the University’s aim of making a difference by conducting mission-oriented research that contributes to public good.

“It’s such an honour to be recognised for research that aligns with the University’s purpose to bring about positive social change. My research exploring the role of media in institutions that change national conversations, such as royal commissions, has developed over many years, within the rich research environment of the News & Media Research Centre,” said Professor McCallum. 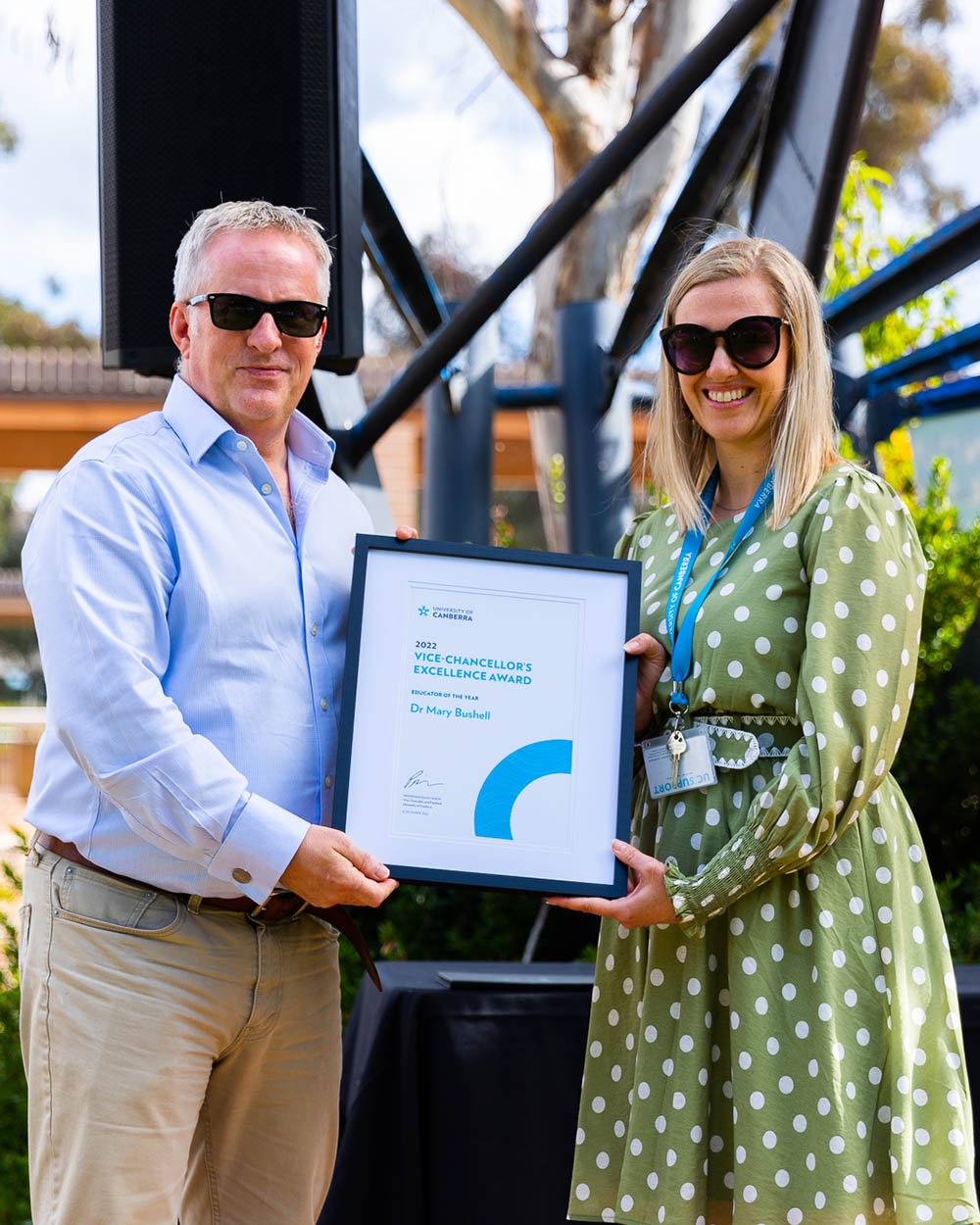 Dr Bushell developed a series of short form educational videos on TikTok for students, explaining how the most frequently prescribed medicines in Australia work. These videos have been viewed over 1.3 million times and include a national and international following. Neurodivergent and students with dyslexia have recognised their usefulness as a teaching tool, promoting equity in learning.

“I work at a university where there are so many dedicated and talented educators, it is a real honour to be singled out and awarded Educator of the Year,” said Dr Bushell on receiving her award.

The Chancellor’s UC Citizen of the Year Award recognises an individual staff member who has made outstanding contributions to Canberra and the region through their work at UC. 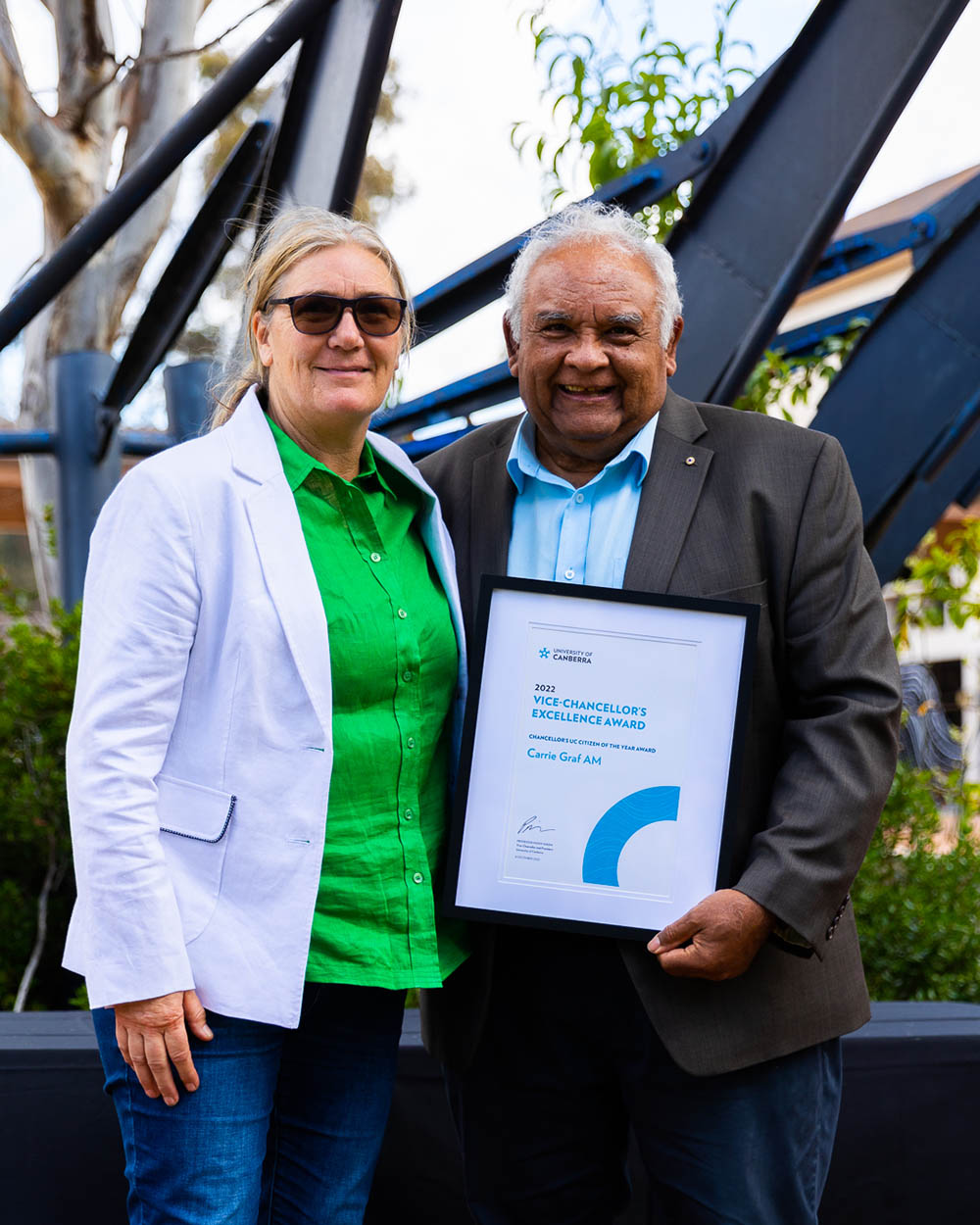 Director of Sport Carrie Graf has worked across UC’s sport sponsorships, student sport, and the faculties as a co-lead on the University’s Sport Strategy, launched in 2022. She has represented UC in various external sport contexts, working with politicians and leaders of national sporting organisations to further sport in Australia and our region.

“It was a huge surprise to receive this award and extremely humbling. This award is not one that I have earned as an individual but instead as a part of the many teams that I am privileged to work with in my role as Director of Sport at UC. As a team player both on the court and in the working world I believe in celebrating collaboration and connection and this award is an illustration of what one can achieve as part of a great team,” Ms Graf said.