4 February 2020: Co-President of the ACT Chapter of the National Association for Women in Construction (NAWIC) Kim Raysmith is a firm believer in the need for diversity in the built environment industry.

As such, NAWIC has come in to support the University of Canberra’s Built Environment Inclusion and Diversity Scholarship with a generous donation of $15,000 over three years.

Medy Hassan of Haus Holdings collaborated with the University to establish, develop and activate the scholarship, which focuses on supporting students from backgrounds under-represented in Australian higher education. Mr Hassan in turn connected with Simon Butt from Manteena, and TSA Management’s Bruce Henry. Together, they funded the inaugural three-year scholarship term in 2017.

The scholarship seeks to support gender equity, Aboriginal and Torres Strait Islander students, students from rural and remote areas, students with a disability, and students from refugee backgrounds.

NAWIC’s contribution will help the scholarship reach its goal of becoming a Perpetually Endowed Fund.

Ms Raysmith recalls how intimidated she felt as a lone female on a large construction site, having entered the industry in her 30s, after a number of years as a business owner involved in wholesaling and manufacturing. 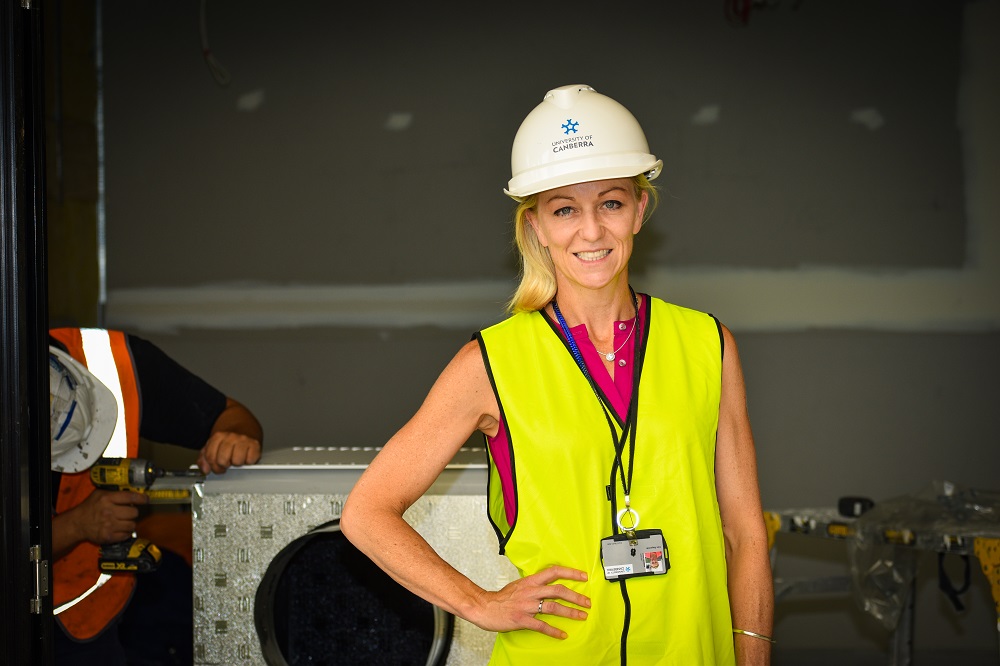 Yet even with a certain amount of life experience she was ill-prepared for what she encountered on building sites. It wasn’t just sexism – it was the feeling that in this macho environment, women weren’t welcome in the industry.

“I felt uncomfortable being on site,” Ms Raysmith said. “It was a novelty in those days to have women on building sites, and was intimidating, especially when I was younger.”

Since then, Ms Raysmith has emerged as an industry leader. She is now a Senior Project Manager and Associate Director/Regional Manager specialising in Health and Education with global consultancy company Turner and Townsend.

And she is especially passionate about her role with NAWIC – an organisation that has given women in the industry a voice – and through which she continuously encourages women to take on roles in the construction industry.

“If I had known about NAWIC back when I started, it would have given me confidence,” Ms Raysmith said. “It’s about women supporting women. It’s so important in the construction industry. Becoming involved in NAWIC allowed me to believe that I could be a leader in this industry.”

She believes that the University of Canberra’s Built Environment Inclusion and Diversity Scholarship will help to greatly widen the sphere of such support for under-represented groups, and support and grow diversity within the industry.

One area the scholarship is looking to address is the lack of women in the construction industry; the percentage of women involved is currently hovering around 9.9 per cent, and Ms Raysmith is determined to improve this.

“There is a perception that construction is just for men, and women need support. There are issues with sexism, and there are barriers when women are dealing with having children as well, which often results in women dropping out of the industry. The construction industry can be demanding time-wise including weekend work, which encroaches on the ability to look after a family,” she said.

The industry will benefit from having women involved, she says. “Diversity of all types leads to better outcomes. Studies have shown that companies with more women show improved dynamics in the workplace, leading to greater productivity. It’s important to change the perception and the culture of the industry.”

So far, four scholarships have been awarded to applicants who have highlighted issues such as alleviating inequality, addressing challenges of diversity in the community, in addition to scholarship awardees who come from a background of disadvantage.

With the overall aim of the scholarship to create a more diverse workforce, Ms Raysmith says that the University provides the perfect platform for this.

“UC covers the whole built environment, with the University as the main hub for construction education in Canberra, so it’s a natural fit with NAWIC’s values,” she said.

As more industry and individual sponsors become involved, ACT and the University of Canberra will continue to grow as leaders of inclusion and diversity in the built environment industry.

For more information on the scholarship, contact Patrick Ransom at Patrick.Ransom@canberra.edu.au or 6201 2291.