2 October 2019: In recognition of her exemplary, passionate work to facilitate and support safety at the University of Canberra – via the UCSAFE online reporting tool Incident Management System – Campus Estate’s Safety and Environment Specialist Sarah Carroll received the Achievement in Safety award at the annual National Association of Women in Construction (NAWIC) ACT awards in late September.

Ms Carroll said that the award was an honour, and further evidence of the changing roles and numbers of women in the construction and safety sector.

“There was a large field of nominees for this award – that in itself shows how women are stepping up and striding forward in a traditionally male-dominated industry,” she said.

“So, this award is not really about me, but about creating opportunities and pathways for the generations to come – so that they know they have options and opportunities everywhere.” 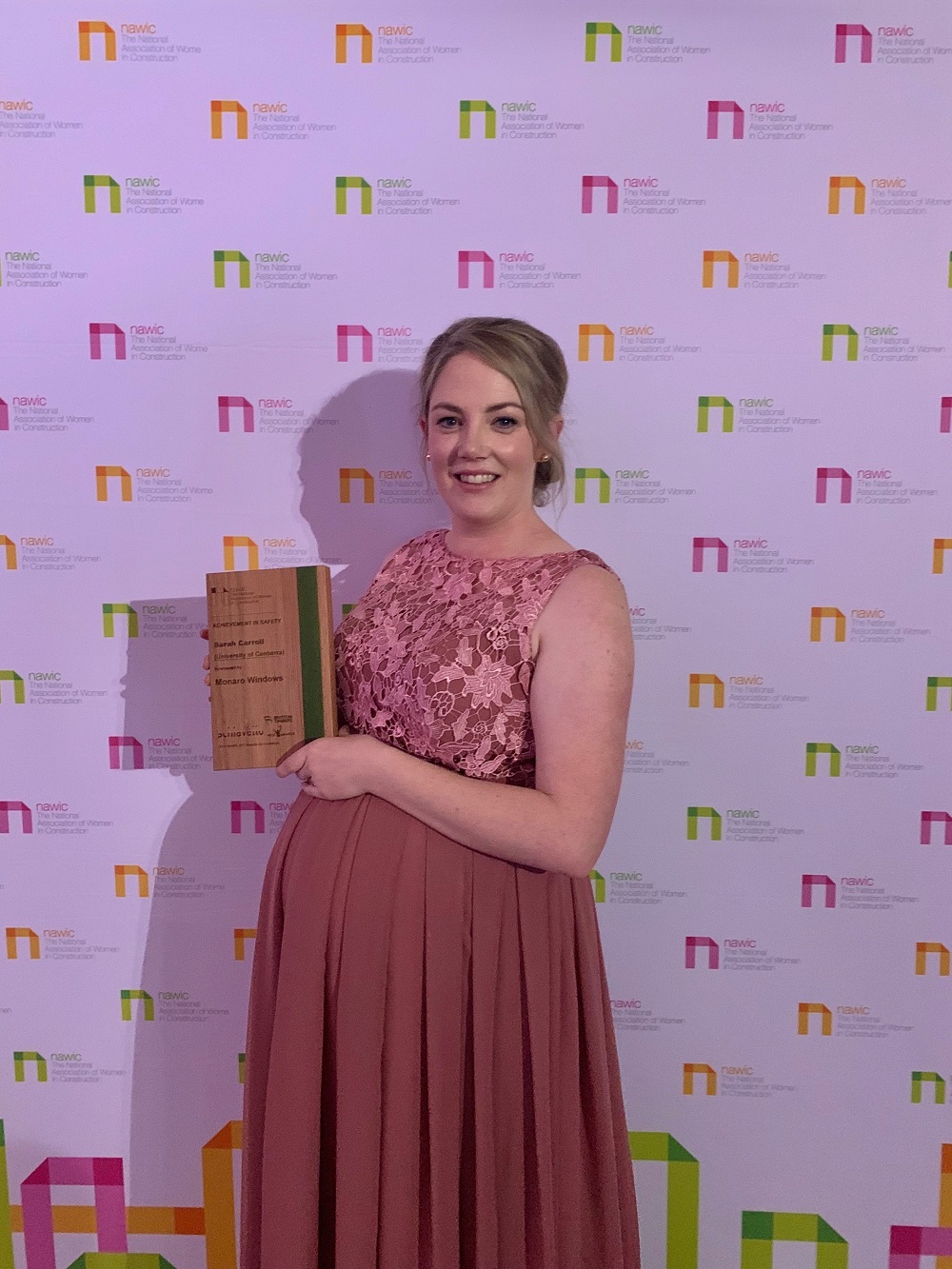 Ms Carroll started out as a facilities administrator straight out of college, and at 22, found herself the only female Facilities Manager in the ACT division of a major government client.

Today, she is an active member of industry networks, including the Property Council of Australia where she is on the Future Directions Committee, which aims to strengthen the future of the property industry, and equip emerging leaders with the opportunities they need to establish themselves.

Ms Carroll also guest lectures with the University’s Faculty of Art and Design, sharing her experiences and talking about safety, risk management and mental health in the construction industry.

There are certainly challenges to being a woman in this industry. “A lot of people tend to think you’re a paper-pusher rather than respecting your role in the field if you’re a woman,” she said. “You just have to have a bit of a thick skin and show them that you know what you’re talking about, that you can and will do the job.”

At the intersection of woman, mother and safety specialist, Ms Carroll looks for balance in her roles – and finds that motherhood, especially, has positively influenced her career. “You certainly learn better management and organisational skills!” said the mother of two-year-old Emma, with a new baby due at the end of October.

“My role as the Safety and Environment Specialist at UC is key to the University’s next stage in transforming its campus into an environmentally responsive, safe campus of the future – and that future may include my daughter,” she said.

“This award is particularly meaningful because it shows that you can have that balance between home life and career, and still achieve at work and have that acknowledged.”

It is also significant to her because the UCSAFE project has been both crucial, and a massive undertaking.

“In early 2018, the University of Canberra identified a need to examine and improve its response to safety, sexual harassment and sexual assault. A holistic approach was needed to prevent and respond to sexual harassment and sexual assault, supported by strong leadership at all levels, comprehensive education to shift norms and attitudes, and robust survivor-centred systems,” Ms Carroll said.

The project saw consultation with stakeholders across the University, as well as the Australian Federal Police, ACT Ambulance, contractors, tertiary institutions, industry leaders and other support services such as Lifeline, Beyond Blue and Crisis Support.

The UCSAFE incident reporting tool is one aspect of that approach – it provides a single point for all staff, students, contractors and visitors for advice, response and referral of reports relating to safety, sexual harassment, assault and misconduct whether on or off campus.

“It assists in streamlining and facilitating communication between survivors, the University and support services to ensure an effective and empathetic response to incidents, including an anonymous option to safeguard the identity of a survivor or bystander,” Ms Carroll said.

The 24-hour UC Crisis Line, a free counselling phone service for the community, forms an integral part of UCSAFE. Ms Carroll and the project team also collaborated on integrating the UCSAFE system with the University’s Building Management System to improve response times. developing and conducting training sessions, guides and marketing and media materials to support UCSAFE.

“Sarah was the driving force behind the UCSAFE project and we at Campus Estate are very pleased for her – she worked incredibly hard to develop and deploy the Incident Management System for UC, and to see her recognised in this way by an external body is just terrific,” said John Owens, Associate Vice President of Campus Estate.

“The development of the UCSAFE Incident Reporting tool has been vital to the University in understanding its risk profile and improving safety for students, staff, contractors, and the wider UC community, and Sarah is a true team player – as evidenced by the fact that she's trained over 200 individuals in the use of the UC Incident Reporting Tool.”

“Safety is a fundamental right,” Ms Carroll said. “That’s why it was so important that we get UCSAFE in place, to help create a safe space in which people could feel confident to come forward – and know that their concerns and reports would be thoroughly investigated.”

Having UCSAFE in place has made all the long hours, sleepless nights and tough conversations worthwhile for Ms Carroll.

“If I have helped just one person feel safe, or that their story is being heard and that they are being given the support they need, I would do this intense project over again, every single day,” she said.

“It has not only changed me but changed my community.”