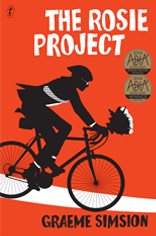 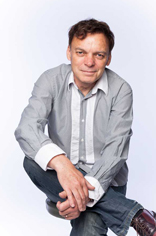 The Rosie Project / by Graeme Simsion

Published by The Text Publishing Company, 2013

The feel-good novel of 2013, The Rosie Project is a classic screwball romance.

Don Tillman is getting married. He just doesn't know who to yet.

But he has designed the Wife Project, using a sixteen-page questionnaire to help him find the perfect partner. She will most definitely not be a barmaid, a smoker, a drinker, or a late-arriver.

Rosie Jarman is all these things. She is also fiery and intelligent and beautiful. And on a quest of her own to find her biological father—a search that Don, a professor of genetics, might just be able to help her with.

The Wife Project teaches Don some unexpected things. Why earlobe length is an inadequate predictor of sexual attraction. Why quick-dry clothes aren't appropriate attire in New York. Why he's never been on a second date. And why, despite your best scientific efforts, you don't find love: love finds you.

Graeme Simsion was born in Auckland and is a Melbourne-based writer of short stories, plays, screenplays and two non-fiction books. The Rosie Project began life as a screenplay, winning the Australian Writers Guild/Inscription Award for Best Romantic Comedy before being adapted into a novel. It went on to win the 2012 Victorian Premier's Literary Award for an unpublished manuscript and has since been sold around the world to over forty countries. Sony Pictures have optioned the film rights with Graeme contracted to write the script. The Rosie Project won the 2014 ABIA for Best General Fiction Book, and was ultimately awarded Australian Book of the Year for 2014.

Graeme has also written a sequel entitled The Rosie Effect.

'It's an extraordinarily clever, funny, and moving book about being comfortable with who you are and what you're good at. I'm sending copies to several friends and hope to re-read it later this year. This is one of the most profound novels I've read in a long time.' - Bill Gates

'Funny and heartwarming, a gem of a book.' - Marian Keyes

'Don Tillman helps us believe in possibility, makes us proud to be human beings, and the bonus is this: he keeps us laughing like hell. I'd love to have a beer with the humane and hilarious Graeme Simsion'. - Matthew Quick, New York Times bestselling author of The Silver Lining Playbook

'The Rosie Project is 1930s screwball comedy updated for 2013. Hepburn and Grant in Bringing Up Baby, or Rosalind Russell and Grant in His Girl Friday have the exact same pitch, intelligence, wit and farce with a love story at the centre of it all. Madcap indeed, but like those films The Rosie Project underscored with writing meticulously judged…Extremely loud and incredibly long applause.' - Age/SMH/ Canberra Times/Brisbane Times

'What an endearing, funny book…a quirky love story about belonging with poignant undertones on the need for us all to be more tolerant of those with differences. A must read for 2013.' - Courier Mail/Daily Telegraph

'The charm of this story is Simsion's affectionate depiction of his strange, flawed, infuriating, logical and always amusing protagonist.' - Weekend Australian

'Laugh-out loud funny, poignant and so ingenious and compelling you feel as if you want to jump into the world of the novel and join in. In Don's confessionals, there are echoes of Bridget Jones, writer Nick Hornby and Amelie in the French movie hit…but essentially Don Tillman is utterly and beautifully unique and, be warned, you will fall in love with him.' - Australian Women's Weekly

'One of the quirkiest, most adorable novels I've come across…This is a fresh, funny story, written with verve and great timing…I loved The Rosie Project. It's an entertaining read from start to finish, thoughtful and fun, very different and utterly charming - a brilliant first novel from a mature, clever writer.' - NZ Herald on Sunday

'Imagine the literary equivalent of one of those lamps prescribed for sufferers of seasonal affective disorder—a book that found the crack in our seemingly interminable winter to let laughter and light flood in.' - Sunday Times UK

'[Don Tillman is] one of the most endearing, charming and fascinating literary characters I have met in a long time.' - The Times