The selection panel for the UC Book of the Year 2017 comprised of eminent academics, authors, scholars and critics charged with the challenge of choosing the most appropriate novel from a short-list of great books: Helen is committed to providing the best Library service to staff and students at the University of Canberra and learning about and leading the integration of new technologies into the future of the library.

Prior to this she worked as a journalist in Melbourne, Athens and Brussels spending eight years as a European Affairs Editor as accredited press to the EU institutions. Between 2012 -2013 Alia was the Managing Editor of Brussels based New Europe newspaper. She has also freelanced for international outlets such as BBC World, Yahoo Makthoub, Van Daag, the Athens News and worked as a Social Media Editor in the private sector. Her studies were in European Law, International Politics and she is currently working on a Masters in Cybersecurity, Strategy and Diplomacy at UNSW at ADFA in Canberra. She was the organiser of the first Personal Democracy Forum in Brussels, Brussels Twestival 2014 and volunteers on the INYT Athens Democracy Forum held annually to mark Democracy Day in Athens, Greece. Alia is an avid reader and writer and runs the 'Let's Write CBR' meetup at Civic Library as well as presenting at Noted Emerging Writers Festival and being involved in the Canberra Writers Festival; On twitter she is @eurocentrique. 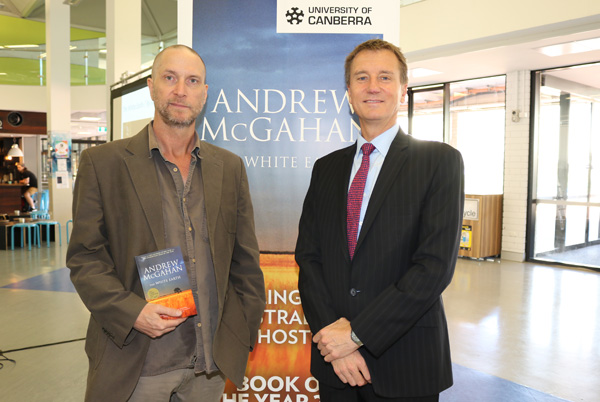 Andrew McGahan is an Australian novelist. Andrew was born in Dalby, Queensland, but has lived and worked mostly in Brisbane. His first novel Praise (1992) was winner of The Australian/Vogel Literary Award. Since then his writing includes an award winning stage play (Bait) and the AFI award winning screenplay for the movie version of Praise. His second novel was the prequel 1988 (1995), and his third novel Last Drinks (2000) was shortlisted for multiple awards, including The Age Book of the Year and The Courier Mail Book of the Year, and won a Ned Kelly award for crime writing. In 2004 The White Earth was published and went on to win the Miles Franklin Literary Award, the Commonwealth Writers' Prize for the South East Asia and South Pacific region , The Age Book of the Year (Fiction), the Courier Mail Book of the Year Award and the UC Book of the year 2017. It was also shortlisted for the Queensland Premier's Literary Awards that same year.