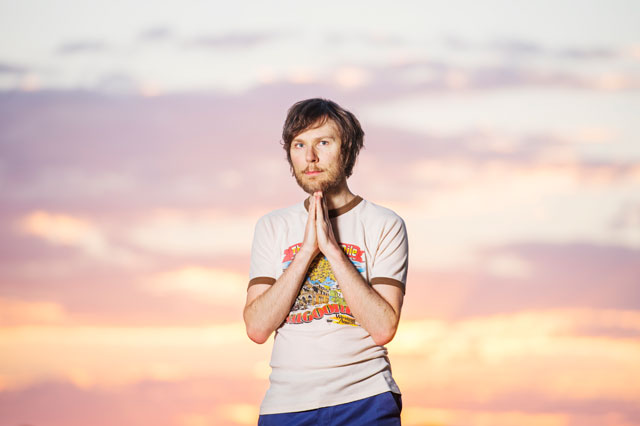 University of Canberra graduate and musical comedian Justin Heazlewood, aka ‘The Bedroom Philosopher’ is set to make a colourful and comical return to his old stomping ground next week for the Canberra Comedy Festival. The former ‘Curio’ magazine contributor, arts activist and Triple J favourite has had an expansive career as an award-winning musician, comedian and author.

Justin brings his critically acclaimed performance ‘Cat Show’ to the Canberra community, with the festival running from 20 – 26 March. In the lead-up to his show, we speak to the man behind the (cat) mask about his career, regrets and life advice as an artist in Australia.

Can you tell us about your degree at the University of Canberra? What are your fondest memories and what do you miss the most about UC?

I completed a BA in Professional Writing (BA stands for ‘Bar Attendant’). I was 19 years old in 1999. Looking back, that was rather young. Still, I dived in headfirst (to bed). I missed quite a few lectures. I liked the ‘Creative Writing’ classes the most, because they made me work and made me talk about my work.

The key point for my university experience was the amount of ‘extra-curricular’ activities I participated in. I joined the Three Dice Theatre Society, I started a band ‘The Harmonica Lewinski’s’, I wrote for the university magazine, Curio. I would argue that all of these things were the most valuable in terms of flexing my skills as the musician, comedian and writer I am now. I sort of made my own ‘black market’ degree on the side.

I think uni should be about the life experience, not just sitting in tutes listening to mature age students drone on.

What has been your career path since graduating from UC?

It’s definitely been a wobbly path, but I get things done and I pay taxes! I entered a competition called ‘Heywire’, where I did a mock J-File about my band, which led to an opportunity to pitch my comical songs to Triple J. I was given my own segment in 2002, where they called me ‘The Bedroom Philosopher’. I’ve spent about 15 years trying to make that a viable career.

Meanwhile I also wrote for Canberra streetpress BMA and I had my own autobiographical column ‘StruthBeTold’. A column with Frankie magazine led to the self-publishing of my own book, ‘The Bedroom Philosopher Diaries’ in 2012. I then received a book deal with Affirm Press who published ‘Funemployed: Life as an Artist in Australia’ in 2014. The book is part memoir, part self-help advice for artists after I interviewed over 100 people.

Where are you currently working? What does a typical day involve for you?

I’m self-implored. I work from home and am writing my next book; a childhood memoir. I keep to school hours, writing from about 9am – 3pm with yoga and lunch breaks. Routine is key to creativity! As a reformed workaholic, I have set boundaries. I don’t work after 5pm, turn my phone off by 8pm and never work on the weekends. I have had to train myself to relax and have ‘free time’. You get better at it, it’s a conscious effort.

What is the idea behind your most recent performance ‘Cat Show’? How did that evolve?

I play songs about cats, while dressed as a cat. There is no more to it. I just thought of it.

What is the best thing about what you do?

The best thing is that I get to do exactly what I want. Sure I have no money or security, but the pride and excitement offsets the gnawing anxiety. I’m time-rich with virtually no regrets (except for that time I should have kissed Tennille behind the cabins in grade six).

What has been a highlight of your journey so far?

A highlight would have to be the nice emails I have received from fellow artists about my book ‘Funemployed’. The fact that I was able to take my own bitterness and vulnerability and create something useful is the exact reason I've always thought that writing was some kind of mad miracle of the modern world. As Dave Eggers said, “it’s like making electricity from dirt; it is almost too good to be believed that we can make beauty from this stuff.”

If you had advice for anyone wanting to follow your career path, what would it be?

Sell off your dignity early, you won’t be needing that!

Ignore your parents, ignore most people. I think it’s really, really important to do what you want to do, not what you parents want you to do. DO NOT SETTLE. Ever. I mean it. You settle then you can kiss goodbye to your dreams. It’s okay to not know what you want to do, but try and pick SOMETHING. Don’t sit on the fence for too long. Just pick a thing and do it and see where that leads. Failing isn’t the end of the world, it’s the start of the next chapter (shit, I just made that up…I should give talks in schools…wait I do.)

Obey your own truth and your own passions and write like the wind.

No-one really knows what they’re doing. We’re all making it up. The only difference with successful people is they commit to a project and they persevere. Forget about money. Deactivate Facebook. See a counsellor. Get excited about something. Write what you know and NEVER read the comments.

*On a side note, if anyone would like to apply for my job I am seeking an apprentice. Must be good at coffees, grammar and hacking.

I once made a presentation for Literacy Studies in my second year of uni. I was reading an essay about a Henry Lawson poem, and I brought along a tape recorder and played the ‘War of the Worlds’ theme song from my Synthesiser album.  I crouched down and began a wild interpretive dance routine. It was improvised. It went for two minutes. Everyone in the circle sat back and studied me seriously. I pressed stop, recovered myself and read the essay as normal. I sat back down and the next person got up and read. No-one ever mentioned the dance. Not a single person, ever. To this day I can’t be one hundred percent sure it happened.

Justin Heazlewood will be performing at the Canberra Comedy Festival on March 24 and March 25. Purchase tickets here.

Stay connected to the University of Canberra and be the first to hear about events, benefits and opportunities available to you. Update your details here.

Alumni Stories; Life Skills; Career Tips; Alumni in the News
Back to top