Karel is an Aboriginal woman who grew up in Tasmania. Her mother is a Palawa woman and her father a Western Arrernte man.

“In about grade four I was told I didn’t exist, that there are no Tasmanian-Aboriginal people, and this was repeated over many years. As the Tasmanian Aboriginal community mobilized and became more visible, the mantra changed to ‘you’re not a real Aborigine’ or ‘you’re only part-Aboriginal.’” The Tasmanian Aboriginal Centre was a key support to Karel as a young person and helped plant the seed for future activism.

What might have (understandably) dimmed a lesser human’s light, only served to illuminate a passion in Karel for improving the wellbeing and health of Aboriginal and Torres Strait Islander people, with a particular interest in helping Aboriginal women and babies.

Karel has led an impressive career in improving health outcomes for Aboriginal women and their babies as both a midwife and as a leader in Indigenous policy development. Throughout Karel’s career, she has played a key role in coordinating Aboriginal dialogue from across Australia which led to the 2017 National Constitutional Convention and the ‘Uluru Statement From the Heart’. The statement calls for the establishment of a First Nations Voice enshrined in the Constitution.

“Throughout my working life I continued to battle the stereotypes other people have of Aboriginal people, and to advocate and educate. In the face of denial, I was expected, and often still am, to justify and explain my own existence.”

Karel’s career spans across the Australian Public Service (APS) in Canberra in a range of Aboriginal and Torres Strait Islander policy and program areas.

After some time in the APS – where she became quite disillusioned with the political rhetoric – she started to wonder about her future. Eventually she decided to revisit her goal of becoming a midwife which happened to coincide with the introduction of the direct entry Bachelor of Midwifery program at the University of Canberra.

Karel studied part time, completing her degree in 2014, and started working as a Registered Midwife in 2015. She was the inaugural recipient of the Tom Calma Medal in recognition of her outstanding academic achievement and contribution to UC and the wider community at her graduation. In the same year she also received the UC Ngunnawal Centre Indigenous Students’ Prize.

Karel’s awards and recognition have continued to accumulate. Her outstanding work contributing to important national policies and learnings have had a profound and lasting positive effect on the lives of Aboriginal and Torres Strait Islander people, and her achievements are awe-inspiring.

In 2015 she was awarded the NAIDOC Scholar of the Year Award and her paper for an undergraduate text was published. In the same year, she represented the Congress of Aboriginal and Torres Strait Islander Nurses and Midwives (CATSINaM) on an Expert Advisory Group. This group provided a forum for Karel to provide advice on the culturally safe care of Aboriginal and Torres Strait Islander women and their families. 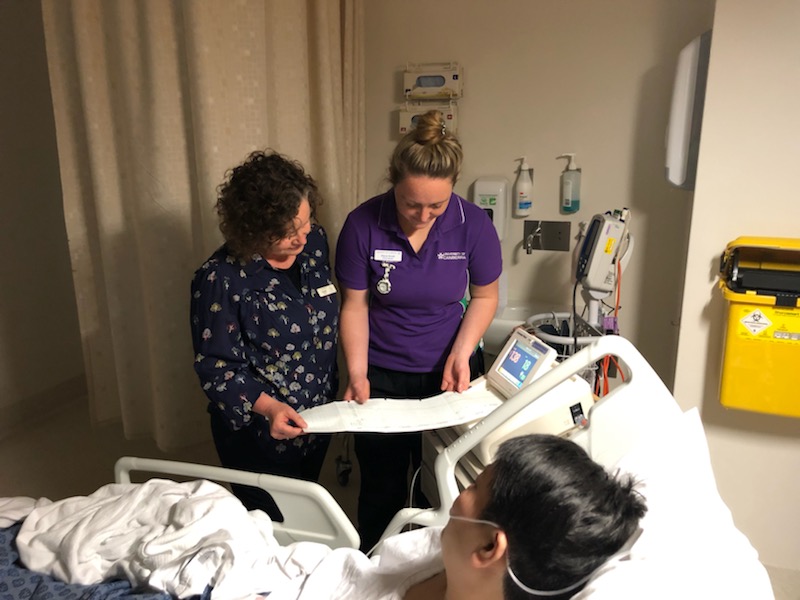 Karel also represented CATSINaM on a range of other expert working groups relating to midwifery, and more recently, was the representative on the National Birthing on Country Strategic Committee. This Committee had oversight of the Birthing on Country Project, which refers to an Aboriginal mother giving birth to her child on the lands of ancestors, ensuring a spiritual connection to the land for her baby, and when unable to give birth on country, that women are cared for in culturally safe environments. Birthing on Country is seen as the best possible way to start the life of an Indigenous child, with a healthy and supported mother

“Helping women to feel safe and realise that they are not just a number in the antenatal clinic, witnessing the joy women show when they give birth, as well as the joy their families experience when meeting their new arrivals, is a wonderful privilege.”

The Birthing on Country Project is already achieving remarkable outcomes, with the Brisbane site seeing the risk of preterm births halved, fewer instances of infants with low birth weights and fewer babies being admitted to the NICU. There has also been an increase in antenatal care visits, normal vaginal births and breastfeeding rates.

Karel is a guest lecturer at UC where she continues to spread her enthusiasm and expertise on improving the experience of Aboriginal women and babies in the health system. She has completed two degrees at UC and is currently working towards a PhD.