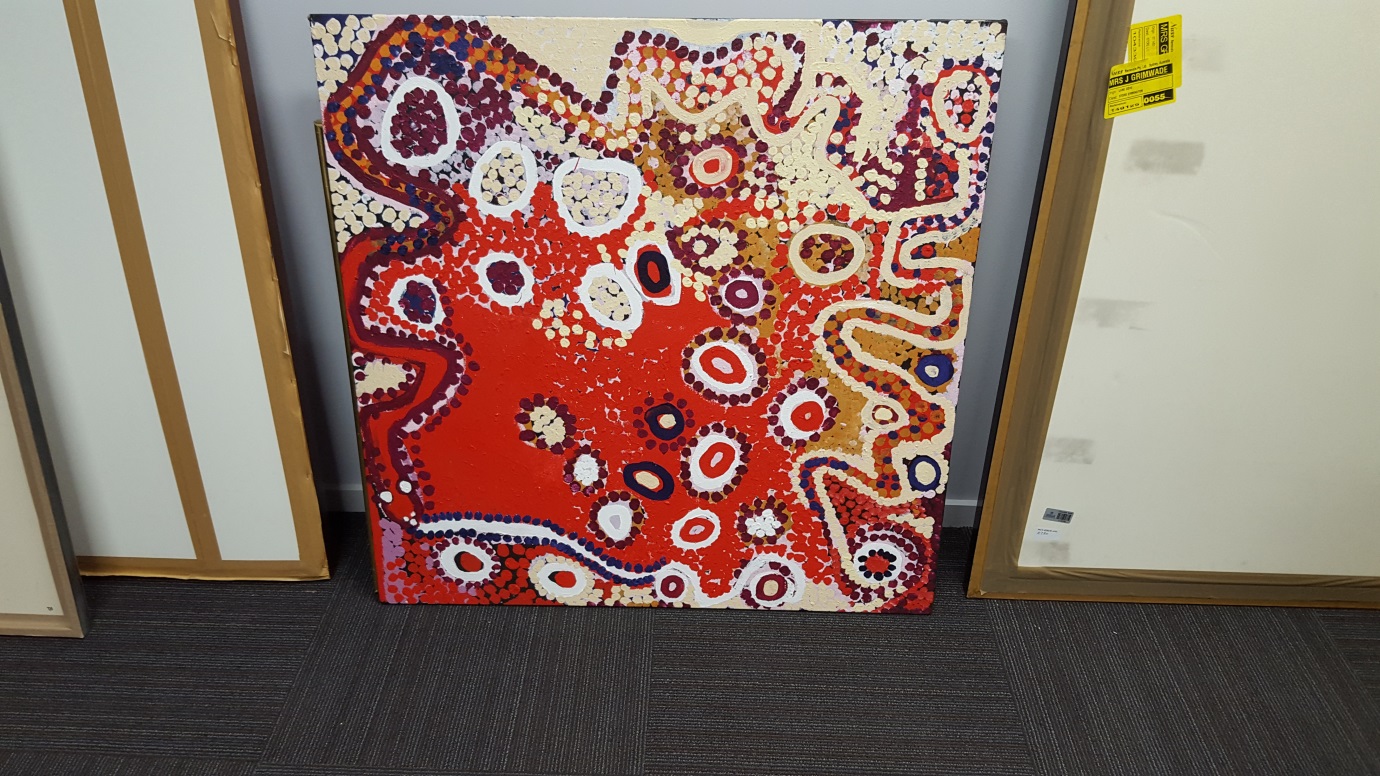 The following extract comes from the Olsen Gallery Sydney:

Tiger was born around 1920 (though the exact year is not known). He was born near Nyapaṟi in north-west South Australia.1 His family were Pitjantjatjara, and they lived a traditional, nomadic life in the bushland around Piltati. When he was a teenager, Tiger's family settled at Ernabella, which at the time was a Presbyterian mission and a sheep station. Tiger grew up on the mission, and learned to speak a little English in school there. He eventually got married to a woman named Nyalapanytja, and they lived in Ernabella for many years. Tiger worked on the station, shearing sheep and building fences.

In the 1970s, Tiger and his family moved to Amaṯa, closer to his homeland. When he got older, Tiger became a ngangkaṟi (traditional healer), an important and respected role in traditional Pitjantjatjara communities.  In 1997, the women at Amaṯa began a community art centre, originally called Minymaku Arts. The word minymaku means "women's", and they called it this because, at the time, Pitjantjatjara men did not like to paint. After several men began painting in the early 2000s, the centre's name was changed to Tjala Arts.

Tiger started painting in September 2004, less than eight years before his death. He had never painted before this, and was better known for woodworking, especially making spears. Although he only began painting in his final years, his work quickly became recognised by critics. In 2005, Tiger was a finalist for the National Aboriginal & Torres Strait Islander Art Award. He became a finalist three more time before his death, in 2006, 2010, and 2011, but he never won. He was also a finalist in the Western Australian Indigenous Art Awards in 2009, and again in 2011. Tiger mainly painted for Tjala Arts, but from 2009 he also began working for Tjungu Palya in nearby Nyapaṟi.1

Wanampi Tjukurpa is one of a series of works by Tiger Palpatja using synthetic polymer paint on canvas.   The following story is related from the Tjala Arts Gallery. It tells of two snake brothers and their wives who are sisters that lived near Piltati, west of Amata. Every day, the women went out hunting and every evening they bough home kuka (meat for cooking) for the men, who didn't do anything but perform ceremonies. After a while the sisters became annoyed at the men's laziness and decided to eat all the food they caught, leaving the men to fend for themselves. The Snake brothers were angry, and decided to punish the women for their insubordination. After lots of talking, the brothers agreed to change themselves into a Wanampi (a giant mythical water serpent, which also had the power to travel above and below ground) and play a practical joke upon the sisters that would cause a great deal of hard useless labour.

They went to a marsupial rat hole where the women had been digging and imitated the tracks of a large snake by rubbing the back of a spear thrower on the ground. Then they entered the hole, and one of them left out enough of his tail for the women to see. The younger sister became very excited when she saw the tracks of such a large snake and its tail popping out. She began to  pull the snake from its burrow, but the tail kept slipping from her grasp. The Wanampi teased the younger sister by allowing himself to be dragged out to a few feet before wriggling himself free. Again and again he let himself be caught before wriggling free once more. Eventually the younger sister became tired, gave up and returned to her sister.

In the evening, when they were eating dinner, the younger sister told her elder sister how she had almost caught a carpet snake as big as a Wanampi, but couldn't pull it from its burrow as it was too strong. The big sister said she would help her to catch it the next day.

the next morning the women set off with their digging sticks and large wooden bowl. They dug all day long then the next day and the next  occasionally glimpsing the snake. Sometime they caught a small carpet snake, enough for their evening meal. the small carpet snakes were created by the the men so the women wouldn't loose heart or grow hungry they continued to dig after the Wanampi but they never caught him. In their pursuit, the women dug a trench from Aparatjura to Piltari, now a watercourse, aproximately 2km long. their burrow became deeper and the women dug many subsidiary branches in their pursuit , creating the gorge at Piltati with its creeks and piles of rock that clutter the valley floor.

Finally the elder sister changed her tactics. she dug a pit ahead of the entrance of the burrow (now the largest rock hole at Piltati), uncovering the Wanampi before he could get away. She was so frightened by his huge coils slithering around her feet that she threw her digging stick, piercing the side of the Wanampi. The younger Wanampi left the burrow, chased , killed and ate the elder sister at the mouth of the Piltati gorge.

The big brother Wanampi is now a bloodwood tree with a dry limb sticking out one side, and the trunk is covered with lumps and excresences. The dead limb is the the digging stick with which the snake was speared; the lumps and excresences are the body of the women still showing through the skin of he snake.

The University of Canberra has another work by Tiger Palpatja, which is displayed near the entry of the Medical and Counselling Team offices, Building 1 and is also titled, Wanampi Tjukurpa.