Sally Morgan The Circle and other works

Sally Morgan, The Circle and other Works

This entry is courtesy of the Art Gallery of New South Wales: Sally Morgan belongs to the Palku and Nyamal peoples of the Pilbara. Her family was part of the Stolen Generation and she grew up in Perth, unaware of her Aboriginal heritage. Until the age of 15, she was led to believe that she was of Indian descent. This experience of hidden origins and her subsequent quest for identity were the inspiration for her 1987 autobiography, My Place. While researching her family history for this book, Morgan's childhood interest in art was rekindled. In 1986, Sally Morgan held her first exhibition at the Birukmarri Gallery in Fremantle. She is currently Director of the Centre for Indigenous History and Arts at the University of Western Australia, Perth. She has continued to write, publishing children's stories, another book and a play.1 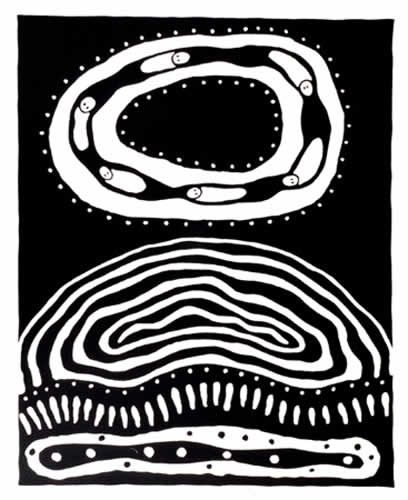 The works of art

The University of Canberra Art Collection has seven works of art, all limited edition prints, by Sally Morgan in its collection. The Circle, was created by Sally in 1990  and was acquired in 2001. This black and white print shows two aspects. Firstly, geography with hills and secondly the circle above.  However, unlike other Indigenous circles which represent meeting places, the figures are traversing around it. The circle seems to represent eternity rather than a gathering. This is edition 24 of 99. The print was originally displayed during an exhibition at ADFA, Duntroon.2 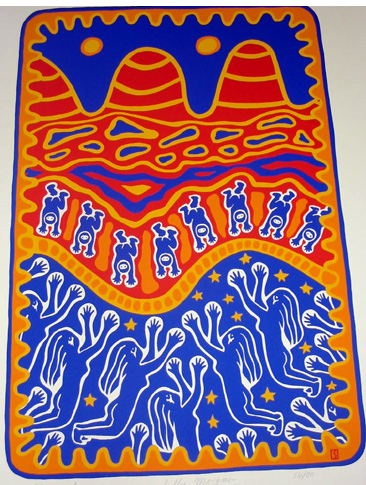 Print, 'Taken Away' ed 54 of 80, was included within the limited edition portfolio, 'The Land' to mark the bicentennial of the 1788 landings by Arthur Philip. The screenprint represents, as the title suggests, the stolen generation. The mothers' outstretched arms separated by a physical barrier from their children.

Marble Bar Pool, is a colour screenprint (ed 2 of 90) and was created in 1990. According to the National Gallery of Australia, this work has major significance as the landscape represents a core area of Sally's grandmother's dreaming. There is a tale that before one can drink from the pool the Ancestor Beings residing in the pool must be placated by blowing across the cupped hand held over the pool. The pool acted as a base for families hunting and gathering in the surrounding country. It was a congregation point for people from a wide area during times of drought.3 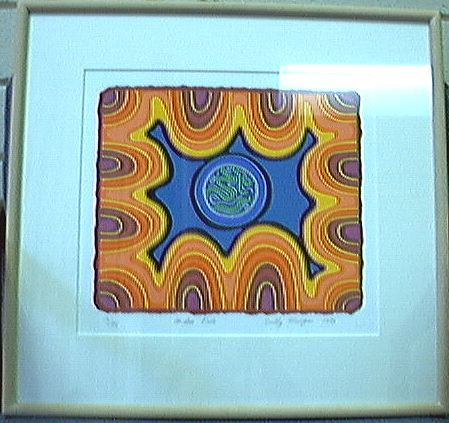 Likewise, Under-Fire, created in 1989 may be seen as a statement on climate change. This screen-print shows a representation of Earth surrounded by fire. It also represents another aspect of Australian life that Morgan has addressed.  According to the Art Gallery of New South Wales, Morgan's cartoon-like works have a graphic quality that belies its serious intent.4

Other works of art in the Art Collection by Sally Morgan include Rain Forest Birds (screen-print created in 1990), Spirit in Land, Lakes and Mountains (1988) and Women of the Earth (1989).