Dame Robin White was born in 1946 in Ngata Awa, New Zealand. Encouraged to take up art at the Epsom Girls Grammer School, Robin went onto both teach and study art the Elam School of Fine Arts (University of Auckland), graduating in 1968. Moving to an artists' colony, 'Bottle Neck'  on the Otaga Peninsula shortly after, Robin gained a reputation as a 'hard edged realist'. In 1972, White moved to Kribati  in 1981 and became influenced by the different social environment that the Pacific region offers and began experimenting in different media and materials including woodcutting and tapa. Robin moved back to New Zealand and settled in Masterton in 1999. 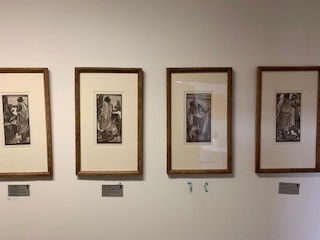 The works of art:

The presented works of art are a series of woodcuts from the series, Samuel Goes Fishing.These four woodcuts depict Pacific Islanders preparing fishing nets and holding conversations. The conversations include, from left to right:

These are thoughts, ideas and observations a family group may have as they prepare their fishing nets.  Take for a moment the sorts of conversations  you may have with friends and family  when out fishing or preparing  a meal.