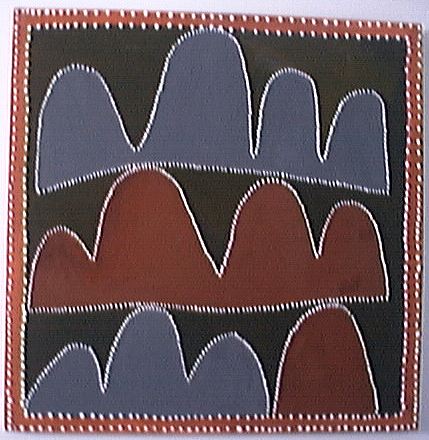 Queenie McKenzie (formerly Oakes or Mingmarriya) was born on the old Texas Downs on the Ord River in the East Kimberley and lived there almost all of her life.1 Queenie then moved to Warmun Community at Turkey Creek when the station manager retired. Queenie knew her country intimately, ‘every rock, every hill, every water, I know that place backwards and forwards, up and down, inside out. 't’s my country and I got names for every place’.2  It is this relationship that prompted Queenie to begin painting.

Queenie was born to Old Dinah a Malngin woman and a white horse breaker (who returned to Queensland) but was raised by a tribal man who had strong links to the ancestral spirits. Despite her light skin colour and fair hair, Queenie was miraculously never taken from her family to be institutionalised as part of the official Government policy of assimilation. With no mission contact and no western schooling her background was therefore truly that of a traditional station Aboriginal, which included a practical knowledge of managing cattle and riding horses.

Old Dinah and her daughter became Roman Catholics when a member of the Texas Downs mob returned to the station and began preaching. Queenie’s hearty singing will be long remembered at the Warmun services where a particular Aboriginal flavour was introduced to the sacrament sung in the Kija language. There were no apparent conflicts in Queenie’s mind between her traditional and her Christian beliefs.

Queenie McKenzie was dedicated to community affairs and assisted with health problems and ways to cope with a growing alcohol problem and teaching the Kija language and culture in the local school. Queenie also encouraged women to participate in ‘Women’s law business. Her first paintings reproduced some of the body art and associated accoutrements used in these ceremonies. Queenie soon realised the power of pictures as a teaching aid and began experimenting with different styles as seen in her works around 1986 showing the dreamtime stories of the Emu, Crow and the Virgin Mary.

Queenie’s commercial career as a painter took off with a painting of a side elevation of Wertim (Red Butte Mountain) in 1990. This was painted at the time when works by Paddy Jaminji and Rover Thomas (also from Texas Downs) began to fetch prices. With canvases provided by the Aboriginal art organisations, Warumun community and from individuals seeking commissions. Queenie acquired the natural earth pigments for painting that came largely from Turkey Creek and soon learned to mix the pigments to good effect. One of her trademark features is a delightful pink colour made from red ochre and white kaolin. This is clearly shown in her work, Mooloogoor Hills.  Whereas Queenie’s topographical features such as mountains and hills are mostly represented in profile, rivers and roads are shown in plan.  Queenie was a prolific painter exhibiting in workshops and galleries across Australia with her works commanding ever higher prices. Shortly before Queenie McKenzie died, she was honoured by being one of eight artists to create prints to commemorate the Sydney 2000 Olympic Games.