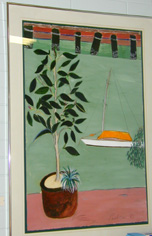 The Artist & his works of art.

Very little is known about this artist.but what can be gleaned from Trove is something about the artist's style. Some have described it as a bit naive as it depicts pleasurable and under-demanding scenes of Sydney Harbour. In an article by Sonja Kaleski, 'landscapes of pleasure', Perdriau's artworks are compared to fauvism. There is a strong case for this comparison as Coverer in Yellow uses strong colours in favour of representational or realistic values. The work itself seems a little abstract with blocks of colour with only the potted plant having any realistic effect. The scene is one that Peter often returns to- views of the harbour often with a yacht passing in the mid-ground. Much of Perdriau's inspiration came naturally from the scenes he could see outside his apartment overlooking Lavender Bay. The works are sometimes described as dreamy or neo-impressionist or even from the charm school of painting. They are simple and in-offensive scenes that are sanitised versions of Brett Whitely.

The Work of art is an acrylic and pastel work on paper and was acquired by the University Art Collection in June 1982.