Judith Clingan, AM,  is an artist based in Canberra known for her visual and musical talents. Born in Sydney in 1945, Judith spent her formative years like many children, painting, drawing, singing , playing the recorder and writing songs and stories.  On leaving school, she studied languages at ANU while continuing to indulge her passion for all things creative. In 1967 she founded the Canberra Children's Choir (now Canberra Youth Choir), and, discovering an alarming lack of interesting music for SSA voices, began composing for them. Along the way she studied music part-time, mostly at the Canberra School of Music: voice, bassoon and composition. In 1970 she founded what is now the Young Music Society: for 10 years she directed holiday music schools for hundreds of children. From 1972 - 1974 she lived in Hobart, studying art, painting, teaching and conducting.

In 1989 Clingan was the Creative Arts Fellow at the ANU; in 1991 she was an Australia Council Composition Fellow. Gaudeamus performers toured her music theatre work Kakadu (1990) to Finland and the work won a Sounds Australian award in 1991. In 1991 she became involved with Steiner education, and since then has written many short choral and music theatre pieces for use in Steiner schools. Also in 1991 she was chosen to be the inaugural Canberra Times Artist of the Year.

From 1994 - 1996 Clingan worked in South Australia, founding Voicebox Youth Opera, for whom she wrote many music theatre pieces. She returned to Canberra in 1997, and founded the choir Wayfarers Australia, and the vocal octet Variables. In 1999 she travelled to Europe on a Churchill Fellowship to investigate music theatre; in 2001 she was awarded an artsACT Creative Artists Fellowship. Some of her choral pieces have been released in the CD Choralations; her pieces for use in schools and community groups can be found in the Songs of the Tree of Life books and CDs.

Judith Clingan is currently based in Canberra, composing, conducting, teaching and performing, as well as organising and directing choral and music theatre holiday schools, music education courses, and choral, recorder and music theatre performances. She also makes frequent forays to other parts of Australia and to Europe to teach and perform both old and new music. Currently (2016) she is about to take a group of her international performance troupe Wayfarers to perform in the Edinburgh Fringe - her music theatre version of Saint-Exupéry's Le Petit Prince will receive its premiere at the Fringe. 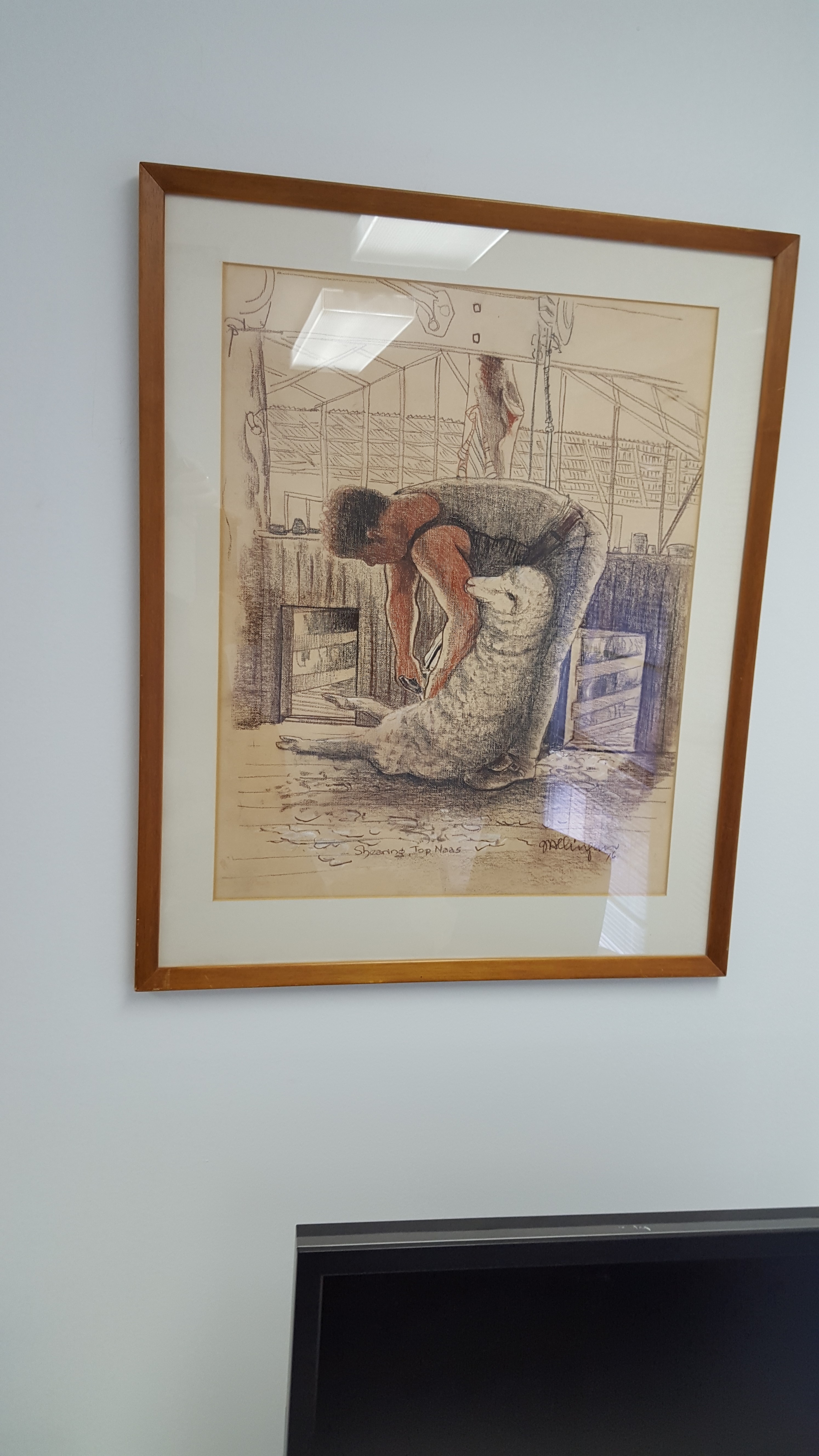 The Shearing of Top Naas was created by Judith Clingan in 1976 and is a beautiful work of art using charcoal and coloured pencils on paper. The work captures a typical scene where a farmhand is shearing a ram. It is rather in the tradition of the Heidleburg School and Tom Roberts, Shearing the Rams, 1890. As such, Shearing of Top Naas follows in the tradition of Australian pastoral scenes.