From the artist's own webpages:

G.W. Bot is the artist’s name for the leading Australian artist Christine Grishin, who has been practicing as a full-time artist for more than 30 years.  GW Bot is a printmaker, painter, sculptor and graphic artist who has exhibited extensively nationally and internationally.  She has had held over 50 solo exhibitions, including shows in Sydney, Canberra, Melbourne, London, Paris, New York and Los Angeles.  She has participated in over 200 group and invitational exhibitions.  She is the recipient of numerous commissions and has been awarded residencies in Europe, Asia and Australia.

The artist explains the choice of her exhibiting name, a choice she made some 40 years ago.  “According to Aboriginal totemic belief, each member of a clan inherits a totemic relationship with a particular plant or animal of the region.  I like this idea of oneness with the environment.  Where I live wombats are especially prevalent and they have become my totemic animal.  The earliest written reference to a wombat occurs in a French source where it is called ‘le grand Wam Bot,’ and hence my exhibiting name – G.W. Bot.”

She was born in Quetta, Pakistan, of Australian parents, and studied art in London, Paris and Australia and graduated from the Australian National University in 1982.  Her drawings were first published as illustrations in a book in London in 1980 and since 1985 she had worked as a full-time artist maintaining an independent studio practice. 1

She is represented by Australian Galleries in Melbourne and Sydney, in Canberra by Beaver Galleries, in Brisbane by Noreen Grahame Galleries, in Paris by Arts d’Australie and in New York by 5+5 Gallery.  In 2005, 2006 and 2009 she was voted as one of the 50 most collectable artists in the Australian Art Collector. 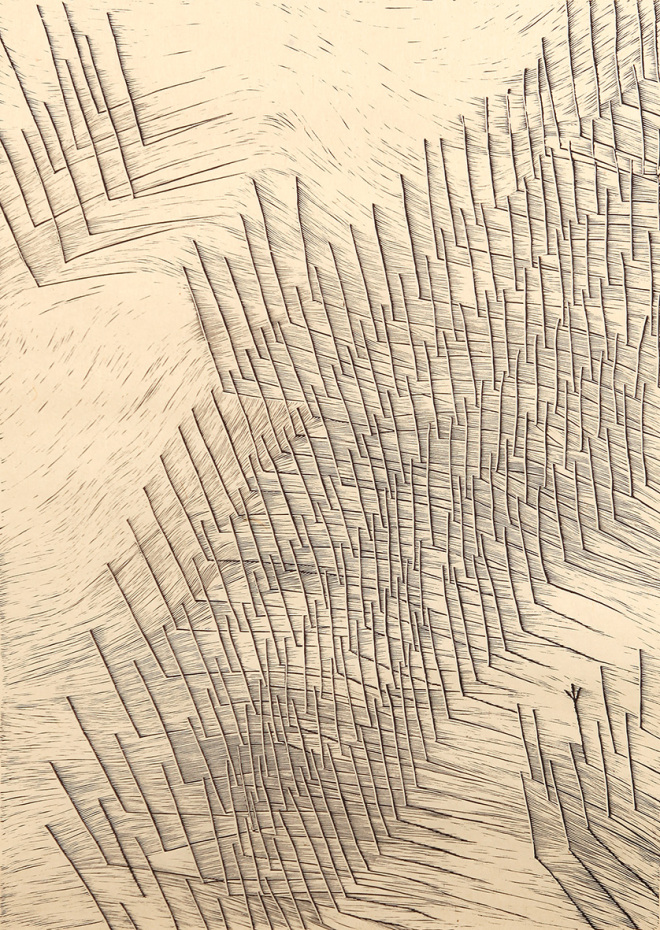 G W Bot is particularly known for works of art inspired by the landscape and nature and Threnody is just such a work. The work of art was created in 1993 and is a block-print on Indian Khadi cotton paper and is the 6th print in a limited run of only 30. The work depicts trees in a snow-field that break through the white surface with sunlight casting shadows across the landscape and causing a hatching effect. According to 'Sounds Like Noise', the work of art, 'Threnody' means a song of mourning and is partly attributed to a musical piece by Peter Sculthorpe which has a Cello playing in slow harmonic intervals. A link to the piece of music can be found in the references below.2

The University of Canberra Art Collection holds three other works of art by G W Bot. These include 'Entrance,' Glyphs and Heiroglyphs (Requiem).