George Gittoes is a celebrated artist, photographer and film-maker who has worked in a wide range of visual  and performance media. George has also travelled extensively for his work, most notably documenting war-zones in Afghanistan and Iraq.

George Gittoes was born in Sydney in 1949. He studied Fine arts at Sydney University around 1967/1968.1 He subsequently left shortly after and travelled to North America where he studied at the Students Arts League in New York. Whilst in New York, Gittoes met and became friends with one of the teachers, Joseph Delaney , who had a profound effect on the direction of Gittoes work later in his life.2  He also met and became friends with Andy Warhol and assists by shooting casting reels on a 16mm movie camera. 3

Returning late in 1969, George goes onto collaborate with other contemporary artists including Brett Whitely by establishing the Yellow House in Potts Point as an exhibition space and the Yellow House Puppet Theatre where regular performances are staged. This was named after Van Gogh's vision of an artists' cooperative a century before in Arles.  Another studio is set up in Bundeena, Royal National Park, south of Sydney the following year.4 Gittoes also travels and works closely with Indigenous artists in Northern Queensland where he is inspired to create a number of works based on the Aboriginal creation myth and the rainbow serpent. Gittoes goes onto travel and study Indigenous art in the Northern Territory in 1976 and producing documentaries in 1984 and 1985 with Gabrielle Dalton on traditional Aboriginal law.5

In 1976, Gittoes meets Zonlton Hegedus, a physicist, who invites him to collaborate on the application of laser holography as an art medium at the CSIRO. This art-form is later exhibited by Gittoes at the Powerhouse Museum, Sydney, in 1982 in a group exhibition called Space -Light: Holography.6

From 1984 onwards, George Gittoes traveled extensively worldwide including Europe, USA, Latin America, The Philippines and most notably from 1993 alongside the Australian Defence Force and United Nations Peace Keepers in war-zones and areas of unrest such as Somalia, Cambodia, the Middle East, South Africa (observing the general election), Rwanda and Mozambique; the Former Yugoslav Republic of Bosnia and areas such as Northern Ireland.7 Gittoes used many of his visits as inspiration for his works of art. For example, his visit to Northern Ireland inspired him to create a series of works based on the confrontations between the Republican and Loyalist paramilitary groups. The time travelling was also well spent creating a range of documentaries which have been highly acclaimed and have been screened in many prestigious locations. One of George's most notable films followed his time  working in Central America  following the Nicaraguan Civil War. Here he developed a role as an artist examining cultures in crisis. The resulting film, Bullets of the Poets. 8

In 1997, George Gittoes became a Member of the Order of Australia for services to art and international relations as an artist and photographer portraying the effects on the environment of war, international disasters and heavy industry.9 In 2015,  George was awarded the Sydney Peace Prize in recognition of his life's work to the peace-making process. 10

The Henna Tattoo was created in 1995 directly inspired by George's observations alongside the Australia Defence Force's peace-keeping duties.9 It is a work of art that typifies the themes George Gittoes is best known for. The work of art was used to illustrate a biography of the artist titled 'The Realism of Peace' in 1995. The painting depicts two international peace-keepers gathered in a Western Saharan encampment sharing local hospitality as tea is served and henna is applied to the hands of the soldiers.9 Henna tattoes are often applied as part holiday festivities and preparations for the bride on the eve of her wedding day. As such the image implies qualities of hope and happiness. This contrasts with many other examples of Gittoes works which tend to focus on the brutal effects of conflict.

The University of Canberra has one other work by George Gittoes. It is a small work- pencil on paper, called the 'Legless Bikeman'. This small study helps to illustrate a work called Realism of Peace (catalogue page 88).10  The legless bikeman depicts  the character,  'Ta Brang'.  He was a character that George met in 1993 pre-election Cambodia and became symbolistic of an optimistic state. Ta Brang was a double amputee who created his own transport. 11 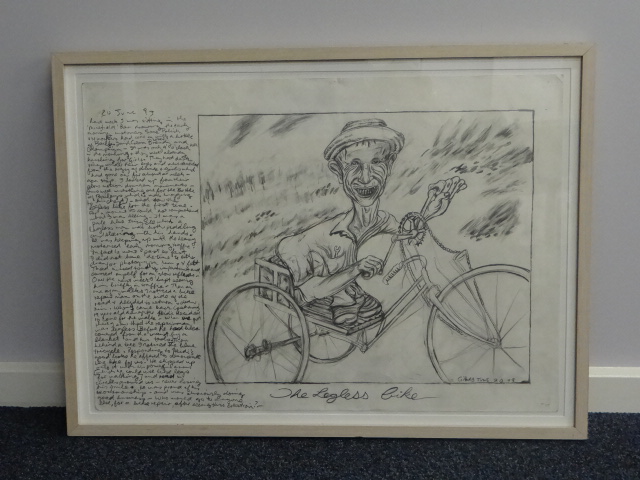