Award winning artist, David Armfield (1923 to 2010) is best known for his landscapes, seascapes and social scenes showing small groups of figures. David was born in Brighton, Victoria,  on the 11th January 1923, he studied at the National Gallery art School  from 1940 to 1941 before seeing active service during World War Two. Following his return, David completed his studies and won a major art prize, the Hugh Ramzsay Prize for Portraiture in 1948. The prize was for a work of art 'Woman in a Green Dress' that David completed in Sir William Dargie's art classes. At this time, David also studied printmaking at RMIT and worked as a freelance cartoonist and illustrator for various newspapers in Melbourne.

In 1965, David Armfield chose to work as a painter full-time concentrating on landscapes, etchings, genre paintings and commissioned works.  From this time, he also travelled with his wife, Joan, to Italy, Greece and France where he took additional inspiration for his works. Armfield belongs to the Australian Social Realist Art Movement. Of this, Armfield has said that he chose social realism in the broader sense noting that the subject needed to say something about realism without being photographic. 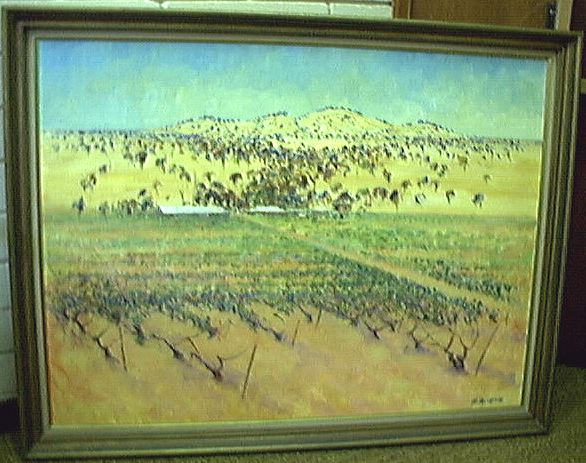 Morris's Vineyard is one of the earliest works of art acquired by the University of Canberra and was painted oil on canvas by David Armfield in 1970 .  The landscape shows a realistic vineyard fading away into the distance with a range of hills on the horizon.  This is a work typlical of Armfield's social realism style. According to art critic Mary Eagle, Armfield's art belongs more to the older enduring order of artists who painted their personal vision of things as we might see them.