Arthur Boyd ranks among the most famous artists in Australia, with the likes of Sydney Nolan, John Coburn and Brett Whitely.  Arthur Boyd was a master in a range of media including ceramics, painting and printmaking. His work spanned the best part of fifty years from early in 1930s to his death in April 1999.

Arthur Merric Bloomfield Boyd was born on 24th July 1920 in Murrumbeena, Victoria.1 He studied and mastered oil painting at an early age through his association with his grandfather, Arthur Merric , with whom he lived at Rosebud on the Mornington Peninsula.2 Many of the seascapes and landscapes produced early in Boyd’s career were the product of his work at a nearby artists’ camp and his relationship with Wilfred McCulloch. These works are notable for Boyd’s innovative technique using a palette knife. 3

According to the Australian Encyclopaedia of Art, Allan McCulloch mentioned the effect the Second World War (WWII) had on the life of Arthur Boyd who perceived WWII as the ultimate evil. Boyd’s suffering during his years in military service led to a number of psychological pictures where his works seemed to spiral out of control in what is seen as the tragedy of human existence.4

Through Boyd’s association with the Contemporary Art Society, he gained an understanding of expressionism, child art, primitivism and the value of studying both old and modern masters. Boyd was also inspired to paint works of mining towns and religious paintings following the discovery of a set of reproductions of the works of Breughel.5

In 1957 Boyd was inspired by the work of Chagall to produce his Half-Caste Bride series of paintings which were exhibited in both the Whitechapel and Tate Galleries.6

On Arthur Boyd’s return in 1971, he took a position as an artist in residence at the Australian National University (ANU) and purchased Riverdale, his residence near Shoalhaven.7

In 1975, Boyd donated a large collection of his works to the National Gallery of Australia (about 3,700 works). 8 Many of his works were completed at his studios in Hampstead, London, Suffolk and Riverdale including his landscapes and riverscapes such as Pulpit Rock.9

The University of Canberra has 6 Arthur Boyd collagraph prints in its art collection. Collagraph prints are formed from a block designed through collage techniques. The block is made up of a series of different objects to form different textures. This is then placed in ink and a relief print is formed.

These works reflect Boyd’s activities following WWII. One can see influences of many of the old Masters on his works, as well as the influences from his family, his experiences and his interests in other periods too.

Boyd’s works attempt to draw the audience into the recesses of the human spirit. According to art historian, Bernard Smith, in an article written in Hemisphere in 1972, Arthur Boyd’s works are complex. People are suspended between worlds or states of being, between the pitiless forces of nature and the god-like grace of being human, between hostility and serenity, participation and voyeurism, love and lust and so on.10

The themes in these prints are reproduced in many of Boyd’s works of art. They reflect his interest in poetry, the environment and biblical studies.  Pulpit Rock, which re-occurs in Boyd’s work, is a topographical feature near his home at Bundanon, and not only represents the fragility of nature but harkens to Boyd’s earlier career painting landscapes. It was his landscape work which won him distinction at the 1958 Venice Biennalle where he represented Australia. 11 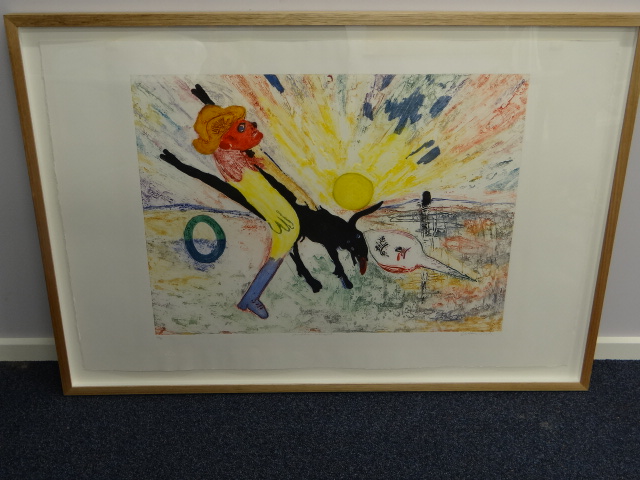 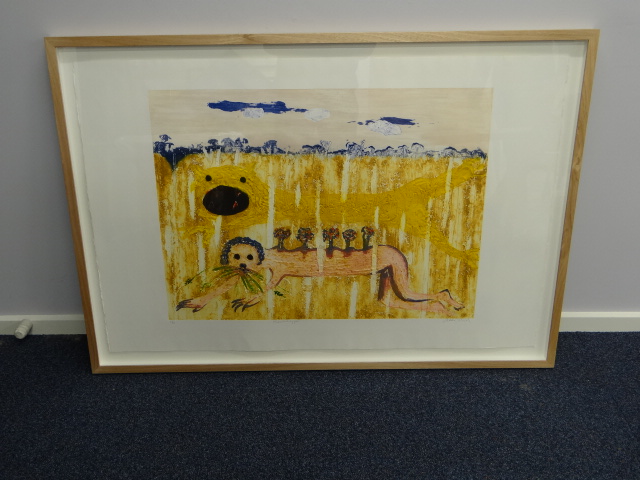 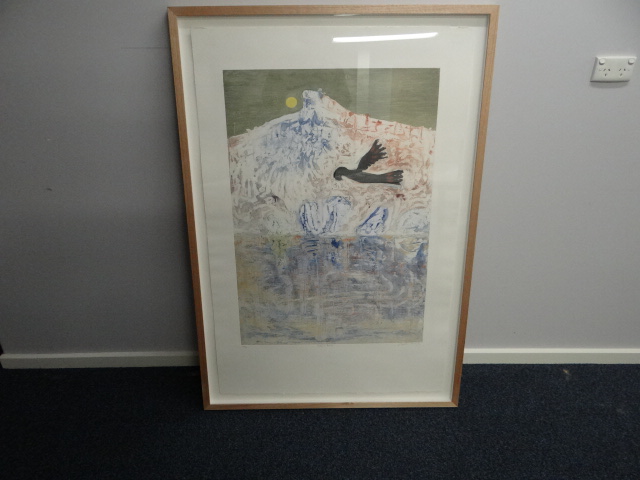 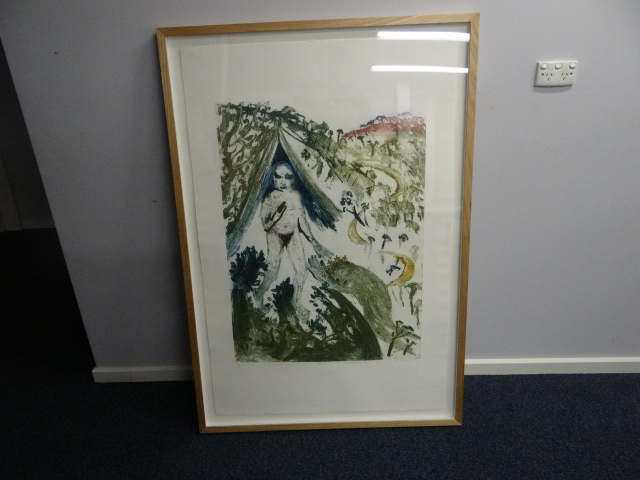 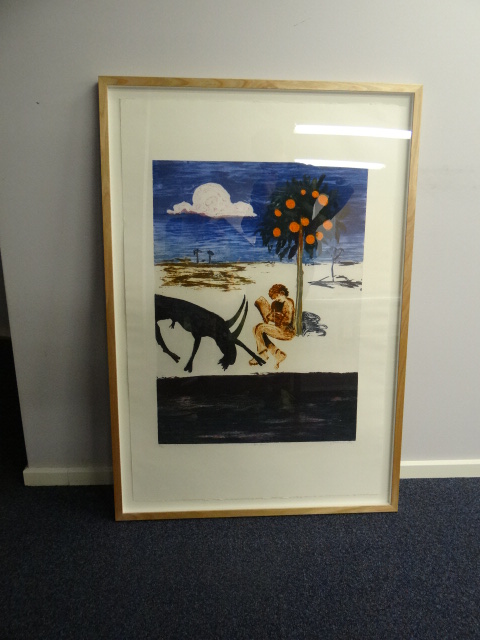 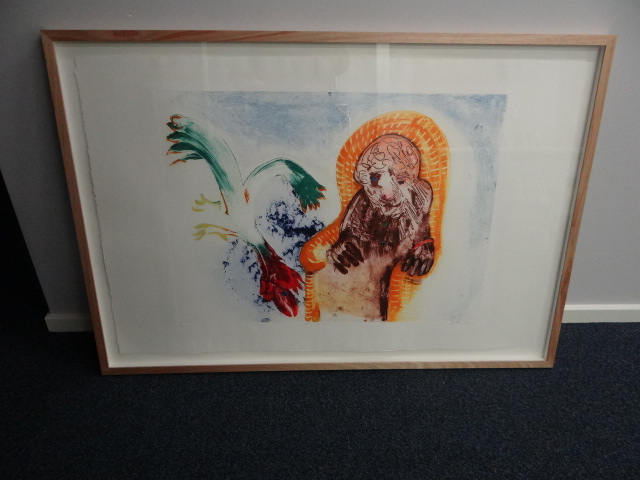 Australian Scapegoat similarly was exhibited in the Venice Biennalle of 1988. According to the Art Gallery of NSW, who display a similar work, this painting is one of the most difficult and bewildering works of recent years. It recalls something of Boyd’s iconography of the 1940s when he drew a woman on the beach at St Kilda walking a paralysed dog by holding its back legs like a wheelbarrow. Here Boyd transforms this image into a parody of the Australian WWI Simpson and his Donkey. 12

The hybrid symbolism of dog-beast-victim has appeared in various compositions over four decades of Boyd’s works. The green tyre and the ray fish underline the artist’s recurring statements about the futility of conflict which always seem to be happening in some part of the world, and about the desolation which inevitably follows. 13

The Hunter, the Princess of Samakhan and the Poet, all painted in the 1990s, likewise refer to themes and ideas first explored in the 1940s including the extremes of emotions and sexuality.

The collagraph print, Nebuchadnezzar typifies Arthur Boyd’s revulsion of war as well as revisiting his interest in biblical stories.14. Nebuchadnezzar was one of the most powerful of the Babylonian kings (now modern day Iraq) who captured and destroyed Jerusalem, forcing the Jewish nation into exile in the 6th Century BCE. As the story goes, intoxicated with the might of his empire, Nebuchadnezzar began to boast of it as his own achievement, created without the aid of God. According to the Bible, the Lord punished him to the wilderness where for seven years he led the life of an animal – exposed to the elements, eating grass, insane. Boyd equated America with Nebuchadnezzar and their involvement in the Vietnam War and is a response to the madness and suffering he saw happening around him.

Other sources of note