The selection panel for the UC Book of the Year 2014 comprised of eminent academics, authors, scholars and critics charged with the challenge of choosing the most appropriate novel from a short-list of great books:- 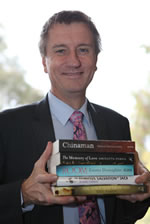 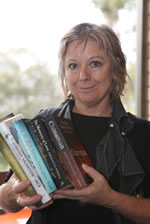 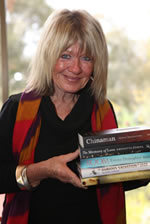 Margaret Pomeranz AM, is a co-presenter of At The Movies on ABC Television. After beginning her career in the media as a journalist and screenwriter, she joined the newly established Special Broadcasting Service as a writer/producer where she became the producer and presenter of The Movie Show, and went on to executive produce Front Up, Subsonics, the AFI Awards and the If Awards.

'As a movie person, I was thrilled to be invited to be on the panel to select the UC 'Book of the Year' 2014. The books selected for the shortlist were a revelation to me. I immersed myself in the range of cultures and narratives presented and recommend all of the shortlisted books to everyone. The subsequent discussion with my immensely impressive fellow panelists was robust, insightful and fun and I think, despite individual passions for individual works, we were happy to reach a consensus in our final decision.

Emma Donoghue's Room is a fascinating, at times thrilling book which challenges one's notions of cognitive development and of displacement from the world. It is a completely original work and I hope all those who read it at the University of Canberra will be as touched and intrigued as I was.' 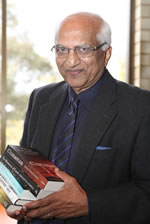 Emeritus Professor Satendra Nandan is a writer-academic and a former parliamentarian and cabinet minister in Fiji.

In 2005 he was awarded Professor Emeritus from The University of Canberra and in January 2013, invited to join the Donald Horne Institute of Creative and Cultural Research in the Faculty of Arts and Design.

Professor Nandan is also an award-winning writer and his publications include more than 15 books and numerous papers and articles on a variety of subjects; his books include: India-Fiji: Experiences to Remember, co-edited and published on January 10, 2013, by the ICCR, New Delhi: Beyond Paradise; Between the Lines; The Loneliness of Islands; Fiji: Paradise in Pieces, Requiem for a Rainbow, and The Wounded Sea. He is working on a novel set in Fiji, Australia and India. His new book of short stories Seashells on the Seashore was launched in Canberra on 11 September 2013.

Professor Nandan was appointed as a member of the ACT Cultural Council and chaired its Literature Committee for several years. He has also been a judge for the Commonwealth Literature Prize for Fiction and an Executive Board Member of APW. As a public intellectual and writer, he has read and commented on international media, including the ABC, the BBC, the FBC, NZBC, STAR, and  Doordarshan, and written for many magazines and newspapers, locally and internationally and has contributed to several TV current affairs programs including the ABC's 7.30 Report and Four Corners. 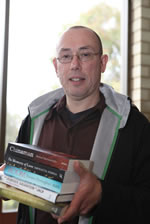 Nigel Featherstone is an Australian writer of contemporary adult fiction and creative journalism. He is the author of the much-loved novellas I'm Ready Now (Blemish Books 2012) and Fall on Me (Blemish Books 2011), which won the 2012 ACT Writing and Publishing Award for Fiction. His novel Remnants (Pandanus Books 2005) was published to considerable acclaim, as was his short-story collection, Joy (2000).

Nigel is also the author of 40 short stories published in Australian literary journals, including Meanjin, Island, and Overland, as well as in the US. Since 2007 he has been a frequent contributor to Panorama, the weekend magazine of The Canberra Times. Nigel has held residencies at Varuna - the National Writers' House (Blue Mountains), Bundanon (Shoalhaven River), and the Kingsbridge Gatekeeper's Cottage, Cataract Gorge, courtesy of the Launceston City Council; in late 2013 he will undertake a residency fellowship at the Australian Defence Force Academy, Canberra. Nigel is the founding editor of literary journal Verity La, for which he received a 2012 Canberra Critics Circle Award. Born and raised in Sydney, he lives in Goulburn on the Southern Tablelands of New South Wales. 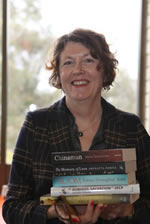 Penelope Layland is a Canberra poet who has been so fortunate as to make a reasonable living from her pen (though not, alas, from poetry) for three decades. She is a former Associate Editor of The Canberra Times and has spent the best part of the last 15 years working as a political speechwriter. She has published two books and is currently a research student at the University of Canberra, exploring the enduring power of elegiac poetry. She loved every one of the novels shortlisted for UC Book of the Year 2014 and strongly urges students and staff not to stop at one, but to read all five novels on the shortlist over the course of the next 12 months – starting, of course, with the electrifying tale that has been selected as this year's winner.