They say the friends you make at university are with you for life – so what about when your best study buddy is also your sibling?

That was the reality for brother and sister duo Lachie and Katie Kilby, who got up on the same stage, at the same graduation ceremony last Thursday, 22 April, to receive their respective degrees.

Katie was receiving her Bachelor of Laws after commencing her study in 2014, and while it wasn’t a straightforward journey for her, it made her graduation all the more impressive.

“I didn’t get the ATAR I needed for a law degree, because I had struggled with my mental health in college and that impacted my scores,” she says.

“My mum and I contacted UC about my circumstances, and they saw my passion and decided to let me enter the course. I guess I have proven myself, because here I am – I’ve graduated.”

Battling anxiety and depression throughout her time at UC, Katie took two semesters off, at different points, to focus on her health.

While that extended her four-year degree to six, it found her studying with her best friend and brother, Lachie.

Lachie also graduated on Thursday with his Bachelor of Laws, forming the second part of his double degree with a Bachelor of Sports Media.

Commencing in 2016, he came into the course almost by mistake.

“I didn’t think I would get into Law, so I changed it – or thought I had changed it – to my second preference,” he says.

“Then I received an email saying I had been offered early entry into the double degree and thought ‘let’s just do it’.

“My end goal was always to be a sports journalist, but I thought if I combined that with law, it would give me more career options.”

The pair hadn’t planned to study the same degree, let alone at the same time, but before they knew it, they were enrolled in some common classes.

While for some siblings this might have built up a sense of competition and resentment, Lachie and Katie say it added even more excitement to their university experiences.

“Honestly it was amazing – getting to do the assignments together, liaising with each other and being able to have someone to talk to about the content – for me – was really important,” Katie says.

“It built up your resilience because someone was doing everything with you. If I was up at 2am doing my assignment, I knew Katie was in the next room doing the same thing,” Lachie added.

“Being able to go through it with her, and then graduate together, was really special – she also gave me textbooks for free, which was a perk.”

If it wasn’t enough that the pair were heading to the same graduation ceremony, they both received their graduating job offers in the same week.

Lachie received his call first, landing his dream job as a radio announcer on Power FM with Grant Broadcasting in Ballarat, Victoria. 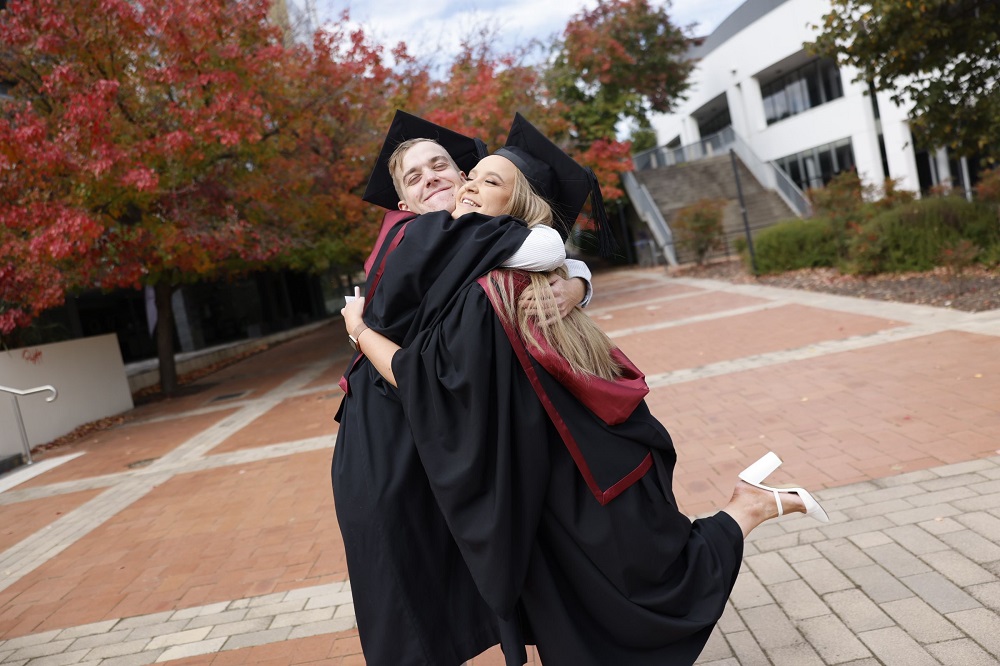 It was news he never thought would come during 2020, after a string of newsrooms across the country were closed, and jobs in the journalism industry were few and far between.

Within days, Katie also had a job offer, as a Funding Agreement Manager with the Department of Social Services in Melbourne.

So, after living at home in Canberra for the better part of their adult lives, Lachie and Katie found themselves packing up to move to Victoria in the same week.

While neither of them has decided to take the traditional law route following graduation, they both agree the skills they picked up during their studies are invaluable.

“The best part about doing the law degree is that those skills are transferable to any profession,” says Lachie.

“I might not be working in a court room with my radio job but things like understanding defamation, having writing skills or being able to communicate effectively were skills I built in my law studies, and that’s really helpful when your job is in communication.”

Now, working in different professions and in different towns, Lachie and Katie reflect on their time at UC fondly.

“UC was such a great support for me while I really struggled with my mental health during my study, creating a reasonable adjustment plan [RAP] especially for me, through the Inclusion and Engagement team,” says Katie.

“There were a lot of times I wanted to give up, and when I got through it all, it was amazing. I think all of that was a testament to my family and UC for supporting me.”

“UC taught me not to plant my feet so much that I don’t have anywhere to move. Industries are constantly changing and evolving, and I am focusing on skills I can build that will help me in the future,” Lachie adds.

After commencing her studies with the University of Canberra’s inaugural Master of Speech Pathology cohort in 2018, Michelle Sofo is now graduating, after studying part-time and facing many challenges along the way.