When Brianna Quinn was studying at the University of Canberra, she joked with one of her professors that one day she would be general legal counsel for football’s world governing body, the International Federation of Association Football (FIFA).

At the time, she was completing a double degree in Sports Administration/Management and Law, with ambitions to work in the field of sports law.

Seventeen years later, in her role as a Senior Associate at Swiss-based law firm Levy Kaufman-Kohler, Brianna counts a number of international sports federations as clients.

It has been a winding road to get to this point, she says – a road that has taken her from Canberra to Sydney to Spain … and now, Switzerland. 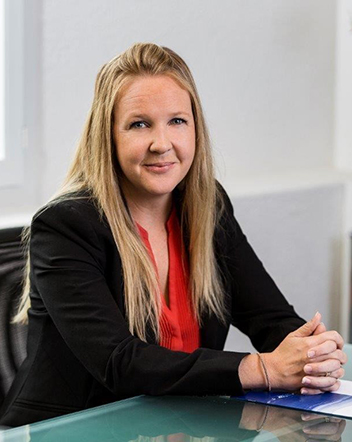 Born and bred in Canberra, Brianna took a year off after completing high school, before she started at UC. In 2007, she graduated with a Sports Management Degree in 2004, and a LLB Law Degree (Hons) in 2007.

“I did a summer clerkship at Clayton Utz in Sydney,” she says. “During that time, I worked in rotation in corporate tax and tax litigation, and found this very interesting. I then worked as a paralegal while I was completing my College of Law year.”

Her desire to explore the world took over. “I travelled around South America for a year, then went back to Clayton Utz as a graduate and settled into competition law,” Brianna says.

After working for several years in litigation and competition law, Brianna started to visualise a pathway to combine her two interests: sport and law.

By chance, an opportunity arose. “I was told about this Master in International Sports Law course in Madrid,” she says. “I checked it out, and it looked ideal. Sport had always been my focus and I was keen to get back into that.”

The course was to alter the direction of Brianna’s life.

“It was a kind of top-down approach,” she says. “You studied the regulations from sporting bodies such as FIFA and how they filter down into various organisations, clubs and federations. Because the course was based in Spain, there was a heavy focus on football.

“Rather than being a purely academic course, the first six months was spent in lectures, delivered by a number of different people – so it was like going to a conference every day.

“People in the field came and talked about their experiences and presented on different topics. The second six month period was spent doing an internship with a law firm. I ended up working for a firm in Switzerland.“

Since moving to Switzerland in 2011, Brianna has participated as a legal counsel in over 20 sports-related disputes at the Court of Arbitration for Sport, and many more at other international level tribunals. She is a permanent arbitrator with the international Basketball Arbitral Tribunal, and has arbitrated over 40 disputes.

Brianna advises on many aspects of international sports law, and is an anti-doping specialist.

“At the moment I do a lot of anti-doping work. We advise international federations on anti-doping and we do proceedings at the Court of Arbitration for Sport. That’s a big part of my work,” she says.

She’s particularly grateful to be able to work exclusively in sports arbitration and sports law, an opportunity that not many lawyers get. As a leader in the world of sports law, Brianna is thankful for the opportunity to have done a double degree at UC, combining Sport and Law.

Seventeen years after that initial observation on how her future might unfold, Brianna has already achieved more than she could have imagined. “I am really happy where I ended up,” she says.

The King of Sports Management

Sydney Kings owner Paul Smith has an unashamed passion for sport that has driven his global success in sports management and a place on the UC Sports Walk of Fame.

UC alumnus and Judo Australia CEO Alex Vallentine is preparing for the biggest challenge of his sports administration career as the global pandemic affects the sports industry.