Throughout his childhood and adolescence, Wayne Applebee was told that he would never amount to anything.

After being doubted and put down, it’s often a given that one might fall into the trap of becoming their stereotype. But Wayne was determined to break through the barriers presented to him and achieve great things.

A Kamilaroi man, Wayne grew up one of seven children, one suffering from muscular dystrophy. His father died when the children were young, leaving his mother to care for a large family. As children, Wayne and his brother often wagged school.

Their truancy was prompted by being put in the ‘other activities’ class – a class designed for those considered non-academically minded - and in those days, often Aboriginal students. The class – rather than educating the students – ran activities like painting or art.

“When I went to school, I was always told that we [my brother and I] wouldn’t amount to anything,” Wayne says.

“We were put into the ‘other activities’ class, where we weren’t given much education – so we just began wagging class.”

As a result, Wayne and his brother were sent to separate boys’ homes; his brother to the Mittagong Farm Home for Boys and then to Daruk Boys’ Home, and Wayne to St Heliers, Muswellbrook, and then to Mount Penang Training School for Boys.

“My mother sat at railway stations through all weather and over many nights, while she waited to see either one of us on alternate months,” Wayne says.

“Released from Mount Penang in an ill-fitting suit, I began work in the building industry, and much later became a union official.”

Throughout adulthood, Wayne has been a man for the community. He gives back to several community initiatives, including Canberra’s Winnunga Nimmityjah Aboriginal Health Service, where he became an uncle in the Uncle’s Mentoring Program.

“I played a lot of sport as kid, and also as I got older, I played rugby league football,” Wayne says.

“I was also the secretary of the South Canberra Rugby League Football Club.” 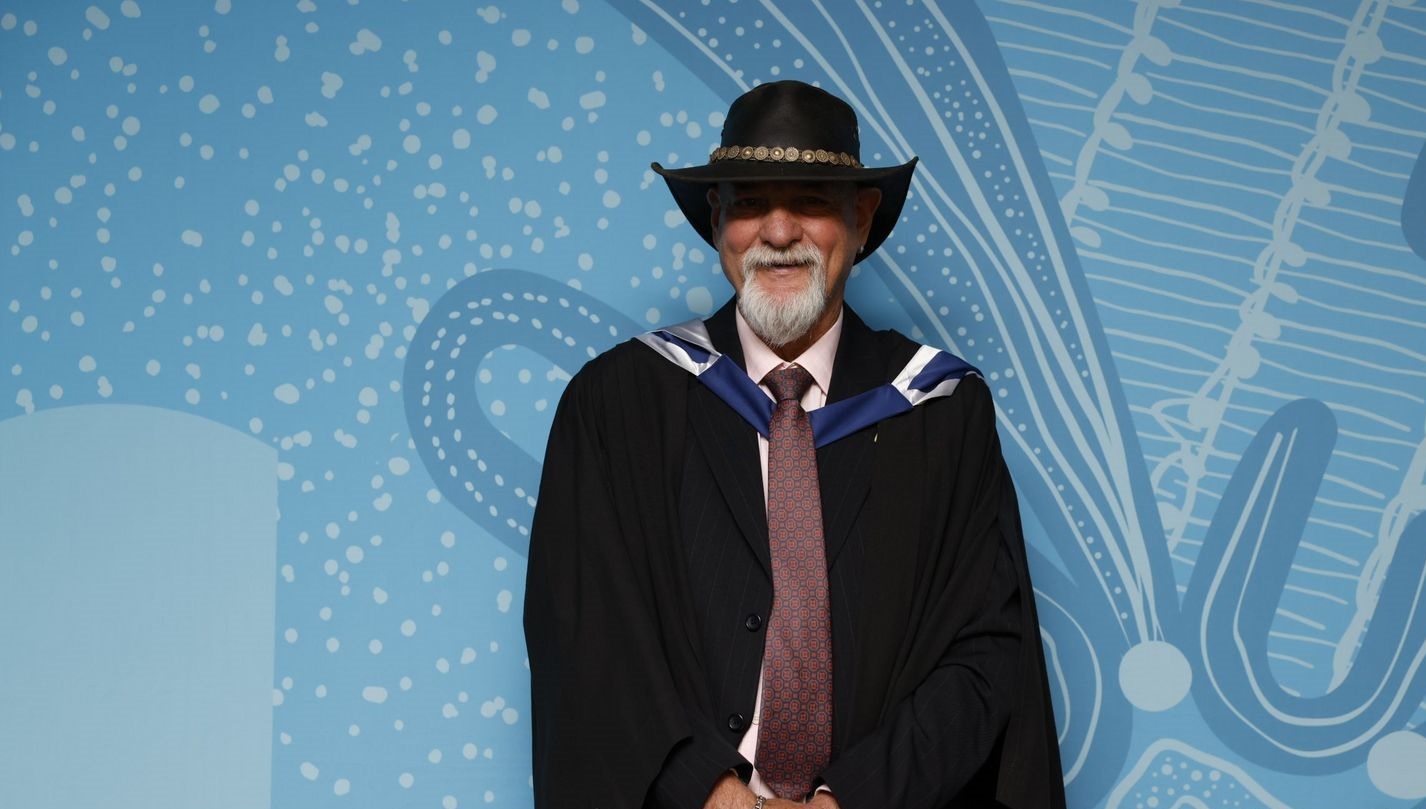 Between working a highly physical job and his sporting endeavours, Wayne’s body began to work against him – with a lower back injury and ongoing neck pain from a previous fracture forcing him to take a step back from work.

It also forced him to consider his options for the future, and at the ripe age of 57, Wayne decided to undertake a bachelor’s degree at UC.

“I believed I was intelligent, and I needed a change of direction, all the while remembering what I was told as a child by a teacher – that I would never amount to anything in life,” Wayne says.

“Determined, I enrolled and was placed in the Ngunnawal Centre’s bridging program. My inspiration was the death in custody of Aboriginal man Cameron Doomadgee on Palm Island. I thought somehow, if I studied the law, I could make a difference.”

The only thing stopping him – his lack of education as a child. Even as an adult, Wayne struggled with reading and writing, key skills needed in a university education.

“I taught myself to read and write – I was terrified of failing again and so I stayed up till the early hours of the morning studying to make sure I could pass exams,” says Wayne.

“My biggest support was my wife – she was constantly saying ‘you can do it’, and finally I did.”

As though all the puzzle pieces from throughout his life suddenly fit together, Wayne hit his stride in education. He thrived in a classroom environment and loved the sense of community that the Ngunnawal Centre, under then-manager Wendy Brady, provided.

Towards the end of his degree, Wendy approached Wayne to offer him a teaching job – in the same bridging course he once undertook.

Completing his Bachelor of Social Science in Justice Studies, Wayne’s thirst for learning stuck around. So as he continued to teach the bridging course, he also continued further learning – and eventually – began his PhD journey.

“Under the guidance of Distinguished Professor Jen Webb, I began my PhD in Cultural Studies,” Wayne says.

“Jen believed in my thesis and provided a great support throughout my journey.”

In this week’s graduation round, Wayne – the boy who was told he would amount to nothing –walked away with a doctorate.

Now, at age 72, he’s showing no signs of slowing down.

“Teaching is my passion – and I want to continue doing it for the next little while at least,” Wayne says.

“I believe I am making a difference here and it’s all been worth the long journey. I came to UC hoping to change opinions about our people, and I am now convinced that is happening at this University.”

Looking towards the future, Wayne would like to travel Australia.

“My wife and I would love to travel domestically once border restrictions have eased a little bit – there is so much in this country to be explored,” he says.

“I’m certainly getting on, so it’s now or never.”