Guy Jones worked for a long time on getting his Bachelor of Sport Coaching and Exercise Science degree – almost nine years to be precise – just to be able to pass on his knowledge to future generations of athletes.

A keen triathlete himself, Guy has coached amateur competitors in the sport for over a decade – and this week, was the recipient of the 2022 Tom Calma Medal in recognition of his academic achievements and contributions to the UC community throughout his degree.

“I was quite shocked to learn that I would be receiving the award to be honest – I knew my marks were good but it just wasn’t something I had contemplated,” Guy says.

“It’s very humbling. I’m very aware of Tom’s amazing achievements, both career-wise and as an advocate, so to receive this award just wasn’t expected!” 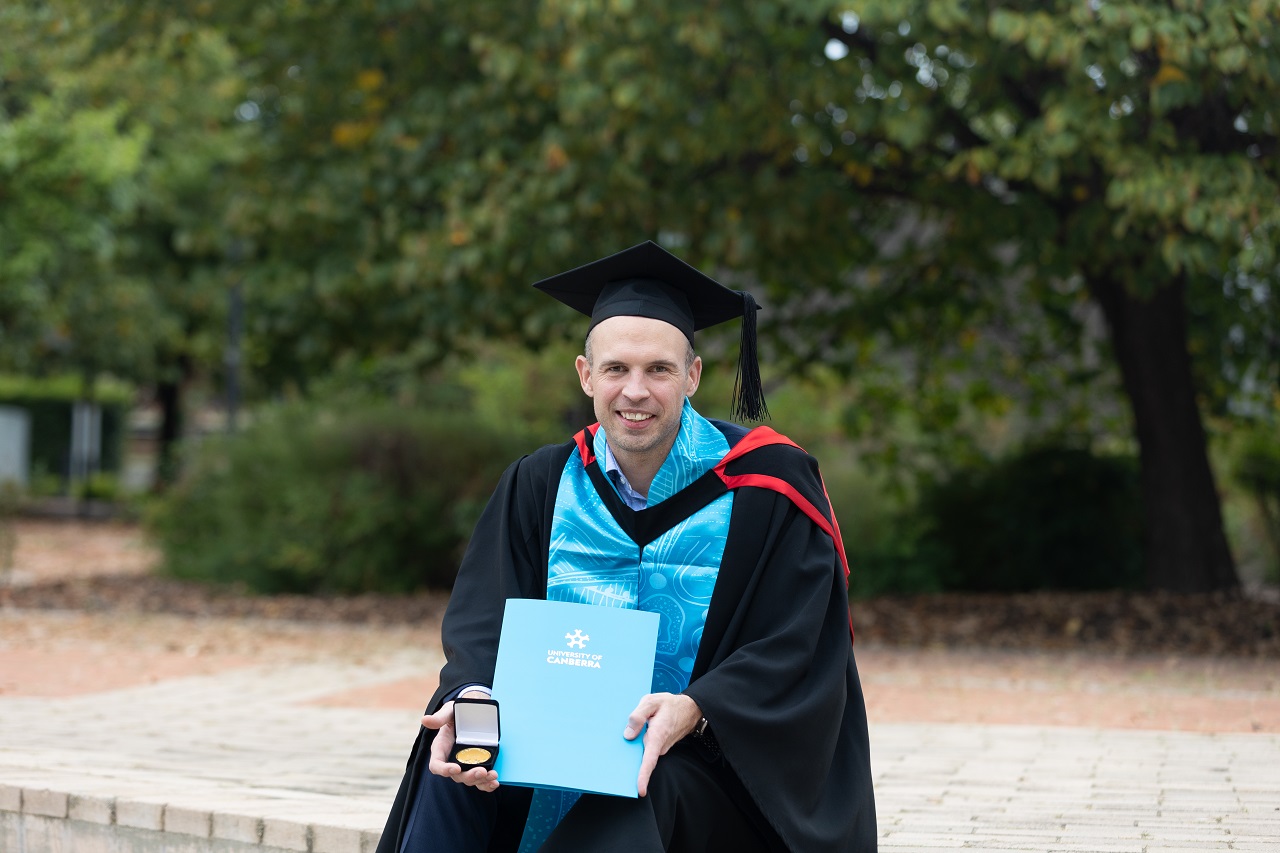 Guy’s university journey has been an interesting one, as he juggled his public service career, a family, and study – but it only served to make him more passionate about the sport he loves so much.

It was also during that time that he started his own triathlon club, where his coaching skills have gone from strength to strength.

“As well as completing my degree, I’ve studied all my coaching qualifications through the triathlon governing body and opened my own club,” Guy says.

“I also compete in triathlons myself, although perhaps not as seriously as I used to. I have an attitude as a coach that I need to continue being an athlete, because I always need to maintain that athlete’s perspective.”

Guy describes himself as very technically-minded – something that has both helped and hindered his sporting career.

“It’s one thing to take a very technical approach to things as a coach, but if you lose perspective on what it’s like as an athlete on the ground, that can be very problematic,” he says.

“Ultimately I’ve learnt that coaching should be 90 per cent personal and 10 per cent technical – and I don’t know that you can be a particularly good coach if you don’t have both traits.”

That personal touch when it comes to coaching was something taught to him from one of his  mentors, Gary Rolfe, who is well known in the endurance sport community.

Guy says that while Gary has taught him along the way, he also considers him a great friend.

“Gary was actually the one who encouraged me to get into coaching, and recommended me for the high level courses,” he explains.

“He’s been a great influence for me – as a school teacher he’s really good at the psychology and relatability areas when it comes to coaching, and those are the areas that I can grow in.”

Throughout his degree, Guy has also sought advice and support from his partner, who is an academic – and so understands the toll studying can take. 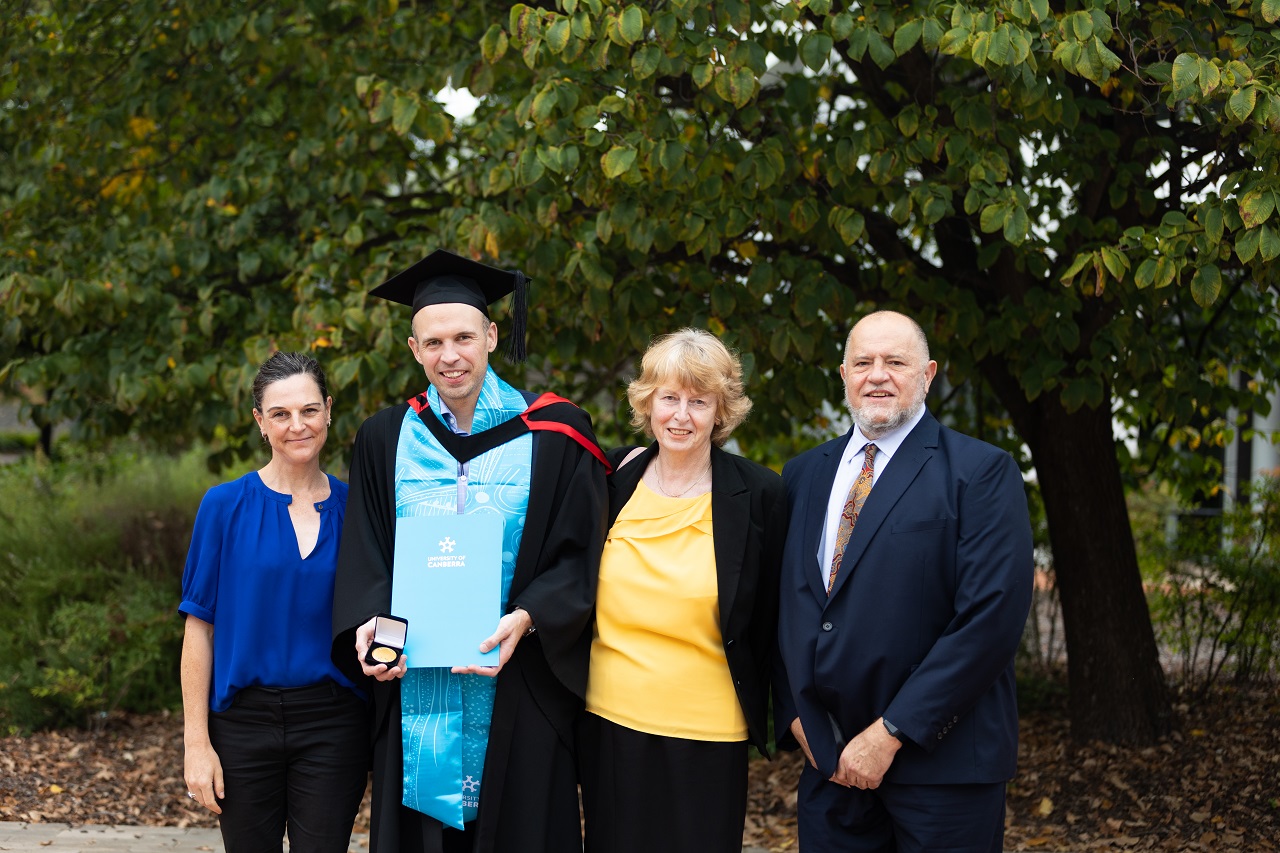 “She’s supported me along the way – we actually met through triathlons – she’s always encouraged me to follow that passion, and it’s certainly not been easy,” he says.

The success of his athletes is the number one driver for Guy, and he says that’s what makes it all worth it.

“When you just see things coming together for someone, and this person is just in peak flow with everything in their life – not just in a training session or a particular race – there’s something a bit special about that,” he says.

“There’s just a moment that happens, and you can see they’re at the peak of their performance – there’s a real kind of magic there.”

This March, the University of Canberra would like to congratulate the graduating classes of 2020, 2021 and 2022.

We are so glad we can celebrate your journey – you have grown in so many ways, and risen to meet challenges with grace and creativity.

Many of you are already impacting your chosen fields, while others embark on the postgraduate study path.

We are so proud of you all, and we can't wait to see what you will do next.

After commencing her studies with the University of Canberra’s inaugural Master of Speech Pathology cohort in 2018, Michelle Sofo is now graduating, after studying part-time and facing many challenges along the way.