Midwifery is so much more than a career choice for her, says Courtney James – it’s a long-held dream realised.

Newly-graduated this year from the University of Canberra, the proud Wiradjuri woman is now working at Westmead Hospital in Sydney as an on-call continuity midwife.

The eldest of six children, Courtney always viewed her mother’s journey through pregnancy, childbirth and motherhood as an affirmation of her strength and empowerment.

“There’s an 11-year age gap between myself and my youngest brother, so I was there to help her out during most of her pregnancies and help take care of the babies,” she says. “My mother had four vaginal births and two Caesarean sections – but it was always that transformation, that shift into parenthood, that really struck me.”

Growing up in Parkes, New South Wales, Courtney saw her life path crystallise in her final year of high school.

“I was contemplating what to do after high school, and really fell in love with the concept of midwifery,” she says. “I decided to pursue a Bachelor of Midwifery at UC, and I entered the degree with a passion for working with Aboriginal and Torres Strait Islander women.”

“Many Aboriginal and Torres Strait Islander women have an increased risk of complexities throughout pregnancy – this is linked to a lack of accessing of health and education services and support during pregnancy.”

“So it’s really important to improve both maternal and infant health outcomes, and this means that we need to build stronger connections and trust with the community – it’s an area of midwifery that really resonates with me.” 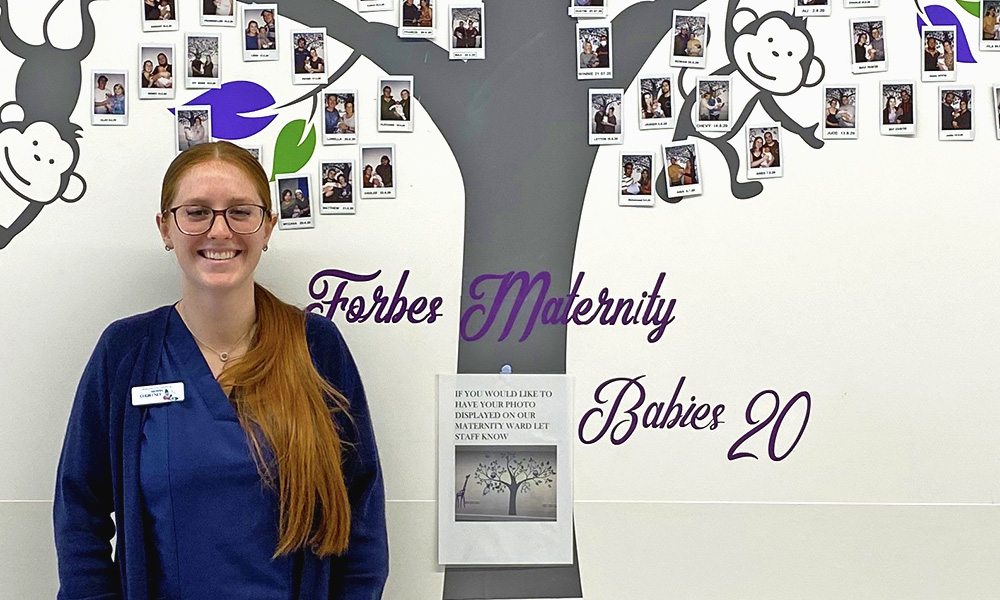 Courtney received various grants while at uni; these included the Jack Scobe Scholarship, a local community scholarship from her home town of Parkes and a Rhodanthe Lipsett Indigenous Midwifery Charitable Fund scholarship in 2017, as well as an Aboriginal Cadetship scholarship from NSW Health from 2017 to 2019. The cadetship saw her working in rural NSW for 12 weeks each year throughout her Midwifery studies at UC.

In her second year at uni, she received the Dr Jan Taylor Prize, which is awarded to a Midwifery student for meaningful engagement in practice. For the 2018 – 2019 period, Courtney received the Puggy Hunter Memorial Scholarship from the Australian College of Nursing, and in 2019, received a grant under the Aboriginal and Torres Strait Islander Tertiary/Health Scholarship Program.

As much as she enjoyed her chosen course, Courtney missed her family.

“The hardest part was being away from them – so I was really happy when I got to do some of my placements in Forbes, working as a student midwife in my own community,” she says.

Courtney loved what she was doing so much that she worked through all her uni holidays, taking her first short break in years just after her graduation.

She was soon back doing what she loved, accepting a position in Wollongong.

“After four months at Wollongong Hospital, my mother needed to have an operation, so I went home and worked locally at Forbes Hospital for a while,” she says.

Now happily ensconced at Westmead Hospital, Courtney is truly enjoying working as an on-call midwife working with a caseload of Aboriginal and Torres Strait Islander women in a continuity of care model. She works within all-risk and high-risk models – an impressive position for such a young midwife.

“It’s about building rapport and relationships, and I get to be there from the start of this amazing life journey,” she says. Courtney can journey with women up to six weeks post-natally.

“This is a path you pursue only if you truly have passion for it – I’ve never met a midwife who doesn’t honestly love what she does,” Courtney says. “It’s a difficult job, you’re usually run off your feet – and there are devastating moments as well as beautiful ones. That’s when you really need that passion for the job to see you through.”

The future of sport in Australia

University of Canberra alumnus Matt Bialkowski has an interesting perspective on how Australia's future of sport is playing out.