The life of a sportsperson playing for your country in competitions across the globe, at first glance, appears to be the ultimate dream. Sure, there are sacrifices and hurdles along the way; that is par for the course.

Imagine though, being involved in a sport that is huge in many other countries throughout the world but for most of the time is relatively anonymous in Australia.

The sport in question is European handball. Often described as water polo on land, it is a mainstream sport in Europe but fledgling in Australia. It is, however, slowly growing in popularity.

It’s played on a court, similar to a basketball court, with seven players on each team, and 30-minute halves. Players can take three steps, then throw, and run with the ball while dribbling. Goals are scored when the ball is thrown across a goal line. It’s a sport that is fast, dynamic and requires huge amounts of energy.

For players of the sport in Australia, its lack of mainstream attention makes it tough to secure funding and sponsors. As such, players representing Australia find themselves having to self-fund training, travel, accommodation and competition.

One such player is UC student Freya Brent, a member of the national women’s team, currently preparing for the World Championships later this year in Japan.

Freya, who is studying marketing at UC, grew up in Canberra. She says, “I actually started university at the ANU studying law and politics, philosophy and economics. But I wasn’t completely committed to it and I knew a lot of people studying at UC who love the culture there. I switched over, initially taking up studies in design, but I quickly changed to marketing management.”

She came across handball when she was in Year 11 at school. A personal trainer at her gym, who was involved in the sport, asked if she wanted to give it a try.

“I went along to a few sessions and loved it. The people I was playing with were great to be around and I loved how the sport was a beautiful combination of speed, strength and smarts.”

From this beginning, Freya went on to represent the ACT and now, Australia.

As a national handball team player, Freya is responsible for paying all costs associated with local training, national tournaments and international tours. This includes flights, accommodation, uniforms, court hire and equipment, as well as local training sessions and games. Freya says, “As a national squad, we have the goal of being internationally competitive. This means that we need to be exposed to playing against international talent, which costs money. We all have to balance our responsibilities as national athletes, with our studies, and often full-time work to pay for it too”.

Freya concedes combining study with sport and work can be challenging; “Finding the right balance between my sport and my studies definitely isn’t easy and sometimes I don’t get it quite right. I’m lucky because all through high school I played a lot of sport so it’s a balance I was quite familiar with. I am definitely more productive if I’m busy. So in some way, the more I do the better I do. Having said that, university is a different ball game to school, not to mention that I have to fit in work as well.” 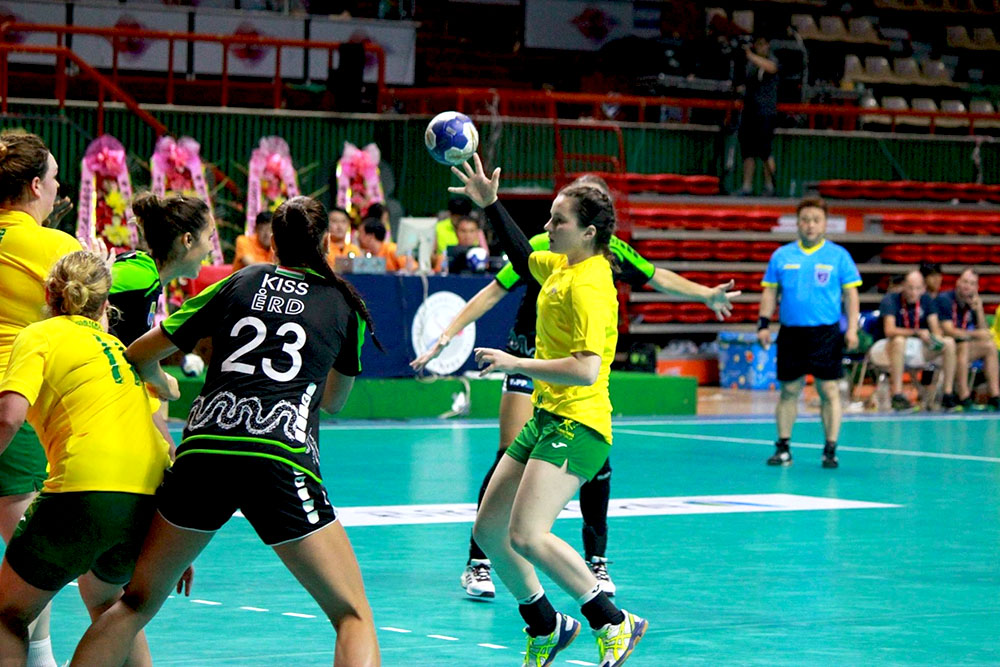 She is not alone in her ‘juggle’. Fellow handball player and UC student, Jessica Cleary, also goes through the balancing act. Jess, originally from Yass, was a member of the Australian under 19 years women’s team, and has gone on to represent Australia in the national women’s team.

UC has identified Freya as a member of the Elite Athlete Program, which offers support as she combines her studies with representing Australia.

“Being a part of the Elite Athlete program has certainly helped to keep me on the right track with my university work without having to sacrifice my sporting commitments,” Freya says.

“The Elite Athlete department, along with help from my course convenors and lecturers, helped make it possible to continue studying whilst living in Europe for handball training and playing. I’ve actually spent the last 12 months living in Berlin.”

If she is not busy enough, Freya is also campaigning to lift the profile of her sport. She says that many people doubted that they would even qualify for the Women’s Handball World Championship, to be held in Japan in December, but the coach and squad worked to prove those expectations wrong.

Life after her degree for Freya is yet to be defined, but she definitely has ideas about her direction; “I am reasonably open about where my career might take me but I am particularly strong willed, and I know wherever I end up, I will be trying to leave the world a better place than I found it.”