Journalism in Australia is a tough business, with a rich history. Although the industry has been tested in recent years by the dramatic shift in news consumption habits, young graduates entering the profession are embracing the digital disruption and paving the way for the future.

ABC journalist and recent graduate from the University of Canberra, Isaac Nowroozi, is one of a new group of modern journalists fostering a diverse skillset and embracing digital journalism.

During his college days at the University of Canberra Secondary College, Isaac found that he wasn’t engaged in studying, much to the disappointment of his family. Coming from a Middle Eastern background, this disengagement was culturally unacceptable, and he found himself caught between his parents and education.

Graduating with a low ATAR, Isaac struggled to decide on a career path post-school. He applied for a course at UC Connect as a pathway option to tertiary studies. During the 12-week course, Isaac learned more than he did during his two years at college, including the fundamentals of researching, writing an essay and creating structured pieces of work.

Isaac enrolled in a teaching degree but soon fell back into old habits, lacking motivation, until his girlfriend asked him to stop and think about what he enjoyed doing. It was then that Isaac realised his passion was writing and storytelling.

On the first day of his Journalism degree, Isaac found a community of like-minded individuals and support. He likens the UC staff and students to Hogwarts – ‘help is always there if you are willing to ask’. The practicality of the course was eye-opening, with access to internships, real-life experience and the opportunity to build networks.

“I found that journalism was where I was excelling. I changed into the Bachelor of Journalism degree and went from getting passes to straight HDs.”

Isaac completed several internships during his time at UC. The first was at a hockey publication, that now no longer exists, but was extremely influential. Attending ice-hockey games and building his portfolio of published work were invaluable experiences that led to other opportunities. Following this, Isaac completed internships and work experience for Capital Football, SBS and ABC.

After landing a position as a Digital Journalist for Sky News, Isaac actively juggled a full-time job in Sydney, driving down to Canberra every weekend to complete his studies at UC and see his family. He credits the support and flexibility from UC and its staff for assisting with the transition.

“I think the best thing about UC is that purpose to get you employment at the end, and so when I landed my first full-time job, they were willing to be flexible and help me to graduate. I haven’t heard that from anywhere else. The mentality here is ‘if you get a job, then we’ve done our job’ and that’s the big difference.”

After four months with Sky News, Isaac landed a cadetship with the ABC, which after 12 months turned into a permanent position with the organisation. A typical day starts by listening to the morning news bulletin, before arriving to work early to catch-up on emails. He is then assigned to news for the day or is left to work on his own stories and find talent. Four of the five days he is out of the office – talking to people, finding news stories and building connections across Canberra. 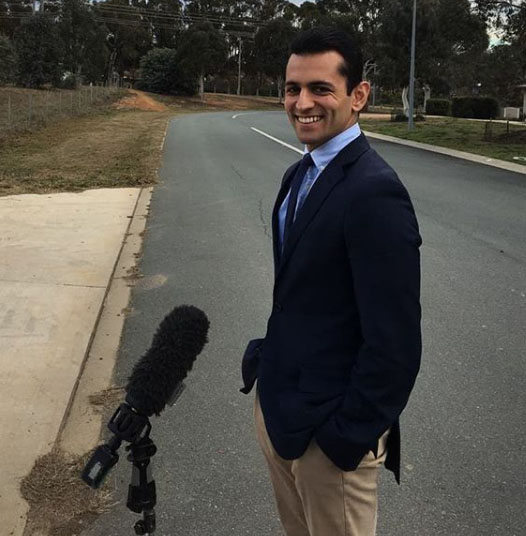 “You get to be part of history and that’s something I’m really excited about.”

Isaac’s passion lies with people. He enjoys sharing their stories, especially those that have gone through unbelievable or difficult times and giving a voice to those that need to be heard. The best part of his job is that every day is different, and at times he has found himself in strange and wonderful situations and scenarios, but that’s all part of the job.

Since dipping his toes into the media industry, Isaac has seen a lot of changes to traditional media, and a move towards online consumption. However, he’s learned that fostering a diverse skill set is key to embracing digital journalism.

“There’s a time and place for television and radio, but I also think that very soon we may consume media just through rolling bulletins on our phones. It’s a big question that has often been asked, and I have a few ideas of how it might play out.”

For Isaac, his future in journalism is set in stone, and he can see himself as a long-standing server of the ABC. While working towards his goal of becoming an investigative journalist, he offers this advice to any students or young graduates thinking of joining the media industry.

“Say yes to every opportunity, jump in with both feet and don’t be afraid to reach out to people. Take internships and work experience, as it’s a way to work out what you really want to do and keep motivated and focused on your end goal.”