Monitoring the noise levels in restaurants and shopping malls, and translating conversations, are just some of the daily tasks that Shelley* juggles in her role as a carer for her husband.

Alongside university work, placements, and being a mum to four adult children, the Master of Speech Pathology student is committed to completing her studies at the University of Canberra and making a real difference for those in need of communication support.

Previously a teacher, Shelley home-schooled each of her children – and once they were all finished with their schooling, she was looking for her next adventure.

Although she was keen to learn, she wasn’t sure how possible it would be to balance study with caring responsibilities for her husband, who was injured when he was a US Marine.

“My husband is a disabled American veteran, and experiences difficulties with his hearing,” Shelley says.

“His needs are probably very different from what someone thinks of as a disability. If you look at him, you don’t see it.

“When you say you’re a carer, people expect that you shower someone and take them to the toilet, but that’s not necessarily how it works.” 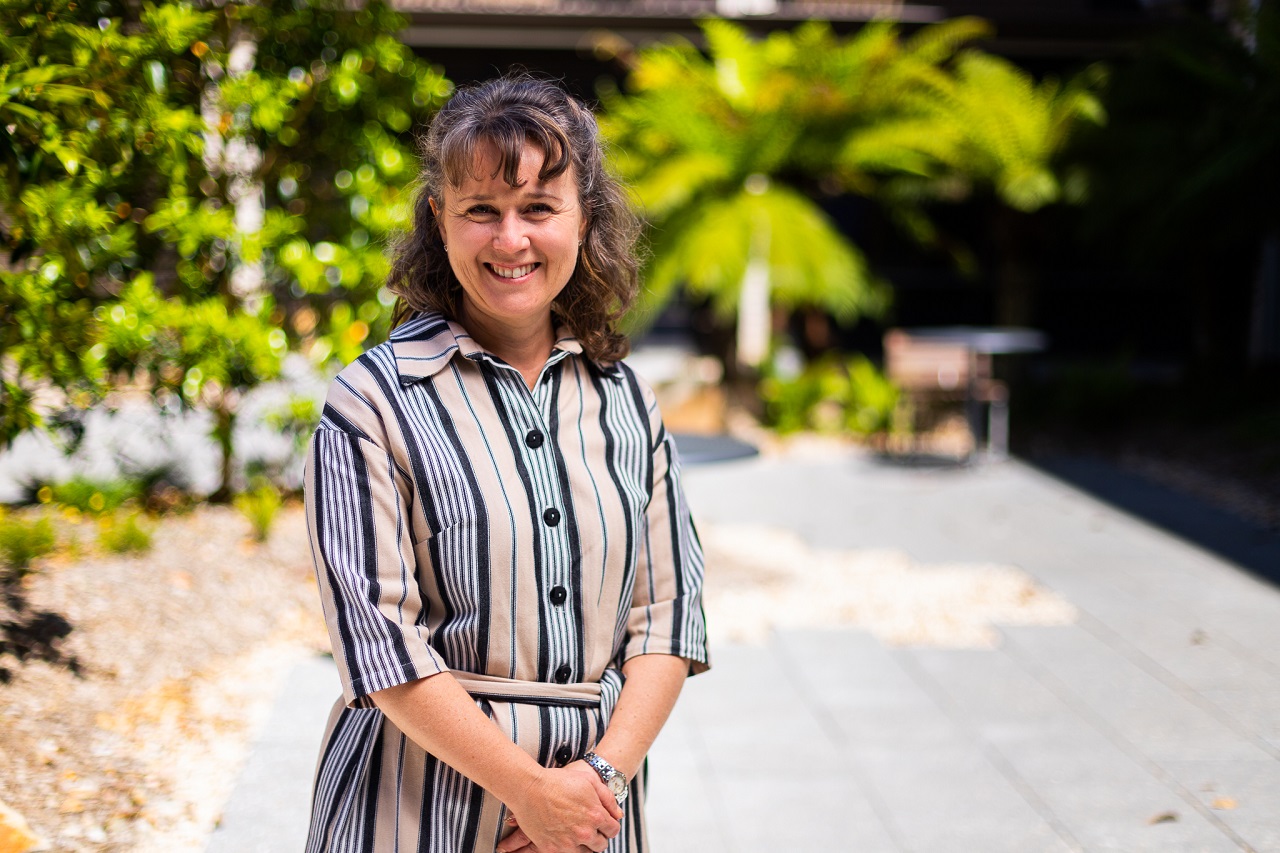 Throughout her everyday life, Shelley is constantly on alert for ways that she can assist her husband in understanding what is going on around him and ensuring he can embrace his life to the fullest.

“If we go to a restaurant, we try to make sure it’s carpeted [to absorb noise] and if we’re talking with somebody, I’m always making sure he understands what they’ve said,” she explains.

“So it’s little things that just change our life. I’m very involved with him and what he does.”

When Shelley’s children – who attend UC – came to her with the idea of returning to university, her husband was her number one supporter, and his disability benefits extended to cover Shelley’s university costs.

“The kids were already studying and were under the Education Benefits Scheme because of my husband’s disability, and when they floated the idea of me returning to study, he said to me ‘well you know that’s open to you too?’,” she says.

“I said to him ‘I don’t have time for study’, and he said, ‘just think about it, because if it doesn’t get used, it gets lost’.”

His support didn’t stop there – Shelley says the two of them often spend time together proofreading assignments, both Shelley’s and their children’s.

It’s just one of the everyday actions that makes Shelley so proud of their family dynamic.

“My husband tends to wake very early because he’s unable to sleep for long periods of time, so we’ve got one child that is an early morning person, and he talks with him then, and then we’ve got another child that is a night owl,” she says.

Other activities that the couple do together include daily walks, where Shelley says they spend the time talking and reflecting without distraction.

“It really does help to know what he’s focusing on and what he’s thinking, so I can support him in that,” she says. 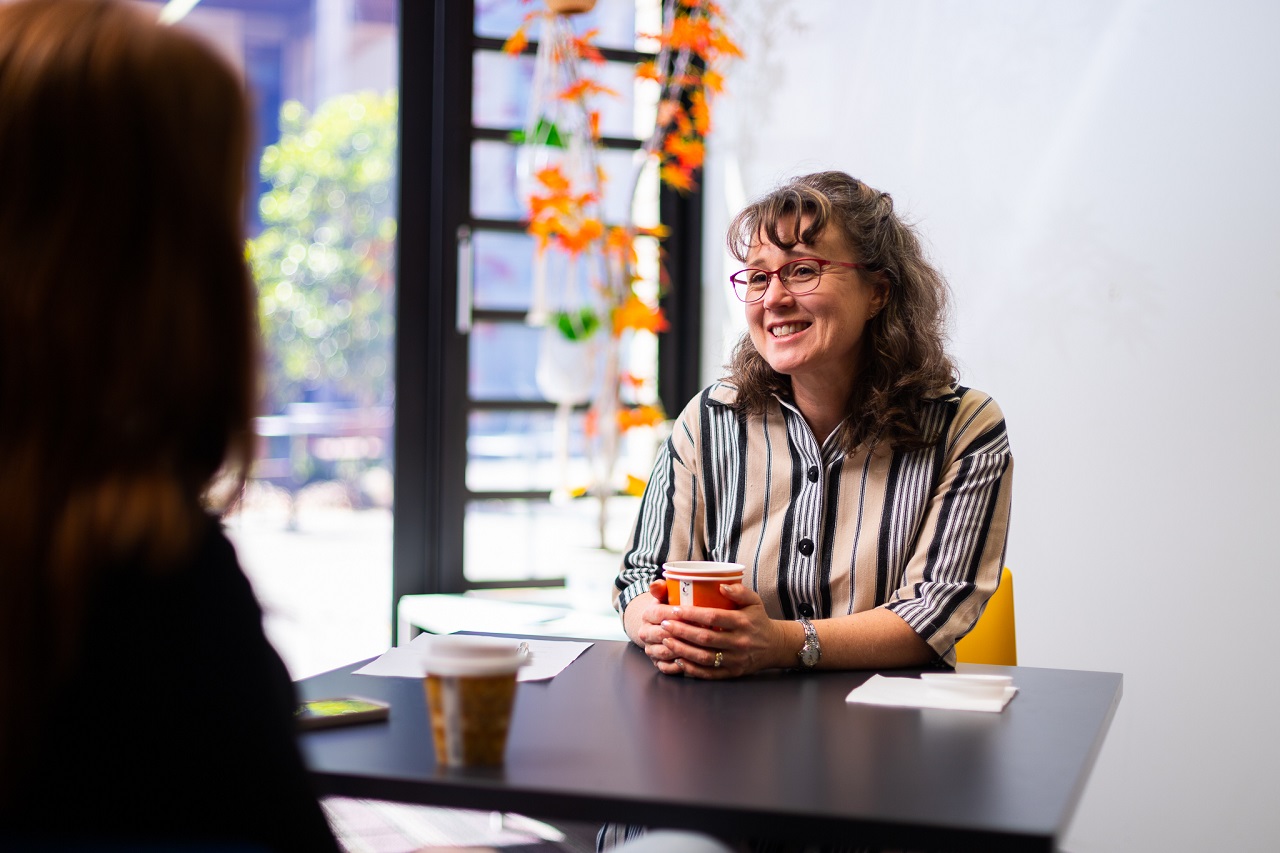 And while she loves the quality time, it’s all those little commitments that busy-up Shelley’s day and make studying just that little bit more difficult.

It’s also why it came as a bit of a shock to Shelley when this year, she began to struggle more and more with balancing her personal, study, and caring commitments.

“In 2020 and 2021, so many of my husband’s appointments were cancelled because of COVID-19 – except his physio – all of the kids’ stuff had been cancelled, and all the extracurricular stuff I had was cancelled,” she says.

“So yes, uni was hard, but it wasn’t so bad. Then as we started to go back to things at the start of this year, all of a sudden you go ‘hang on, I’m starting to struggle with things’.

“Suddenly, this semester, I had to say no to a whole bunch of my outside interests in order to stay on top of my uni work, and that was discouraging.”

Luckily, Shelley was introduced to the InclusionUC team, who have provided immeasurable support throughout her university journey.

They’ve been able to help her communicate her needs to lecturers and tutors to allow for extra consideration, including a Reasonable Adjustment Plan (RAP) and provisions for locally-based placements.

“Initially, I didn’t really think that I needed anything [in terms of support], and it wasn’t until I got midway into my second semester last year that some things came up, and the kids actually said to me ‘Mum, we think you need to go and talk to somebody and get on a RAP’,” Shelley says.

“That gave me the option to be able to apply for extensions. In the middle of this semester, for example, I had to take a week off to take my husband to a conference.

“So right before I even started the semester, I was able to let my lecturers know and they were able to record things for me, let me know what was coming, and give extensions with no questions asked.”

That support has been an incredible help for Shelley, but it isn’t limited to just assignments and exams.

“I’d also been really concerned about placements, because I thought if they send me somewhere other than Canberra, what do I do?” she says.

Luckily, Shelley was granted a Placement Support Letter, which has eased some of those concerns.

The InclusionUC team is not the only community Shelley has fondly become a part of – her fellow Speech Pathology students are a wonderful support network.

“It’s really helped to have a group of other students to ask questions of, and to realise they’re juggling things too,” she says.

“We’ve all had different life experiences, and there are times where you just have to say to each other ‘I’m sorry, I need to prepare meals’ or something like that, and they understand where you’re at and you don’t feel like you’re letting them down.

“We’ve sat there and laughed about the fact that if we hadn’t had each other to ask questions and get help, we don’t know where we would have ended up.”

Some members of that group also have caring responsibilities, and at times, it’s been the motivation Shelley has needed to get through the degree.

“The other carers that I know have shown so much strength – whether they’re caring for partners or children,” she says.

“And I look at them and think – they show up when they’re tired, they give when they’ve got nothing more to give. They have resilience and they’re strong, and even if they feel like they’re not doing well – and sometimes we don’t – they just keep going.”

Some of the best advice Shelley has received was given to her early on in her degree.

“Someone said to me, ‘the biggest strength you have is your fellow students’, and that couldn’t be truer,” she says.

“No matter what happens, you just look for the bright side, and that’s what I see with all of them, every day.”

*Shelley’s surname and her husband’s first name have been withheld for privacy. She is sharing her story ahead of International Day of People with a Disability celebrations at UC, on Wednesday 16 November. Find out more about the event here.