Heather Roche doesn’t just believe in the transformative power of music – she embodies it.

Her natural shyness exacerbated by a lifelong experience with chronic illness, the University of Canberra Bachelor of Science in Psychology student describes herself as a person of few words – until the moment she draws the first notes from her beloved violin.

Then, the music spins a cloak of confidence, whether she is performing as one half of violin-and-cello duo Heart Strings, or singing with her former barbershop quartet. 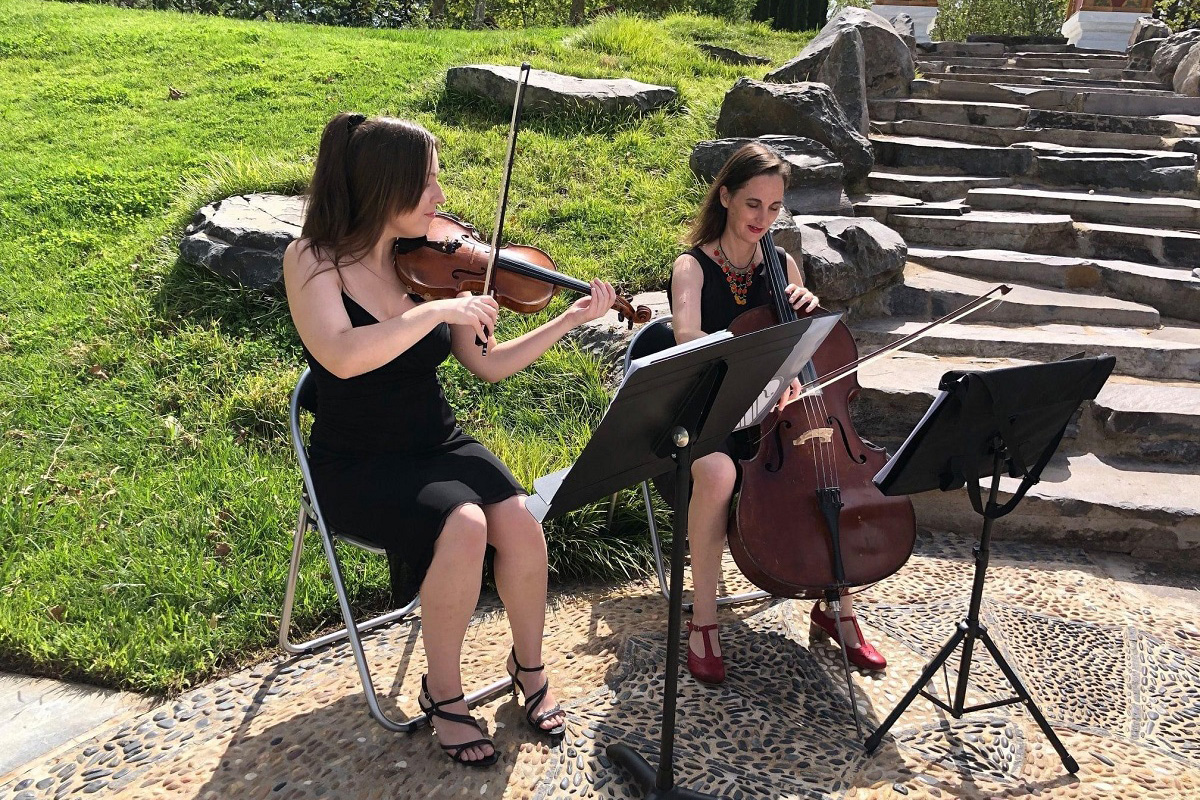 Music is also a powerful forge for connections.

Bridging performer and audience, it draws individual audience members together in a cocoon of shared experience, sparking memories and personal connections.

Heather’s experiences this year have beautifully illustrated that power, as she collaborated with the Canberra Symphony Orchestra (CSO) on Music and Memory, a pilot program for aged care residents living with dementia.

“The aim was to see if music could help reduce the behavioural symptoms of dementia,” Heather says. 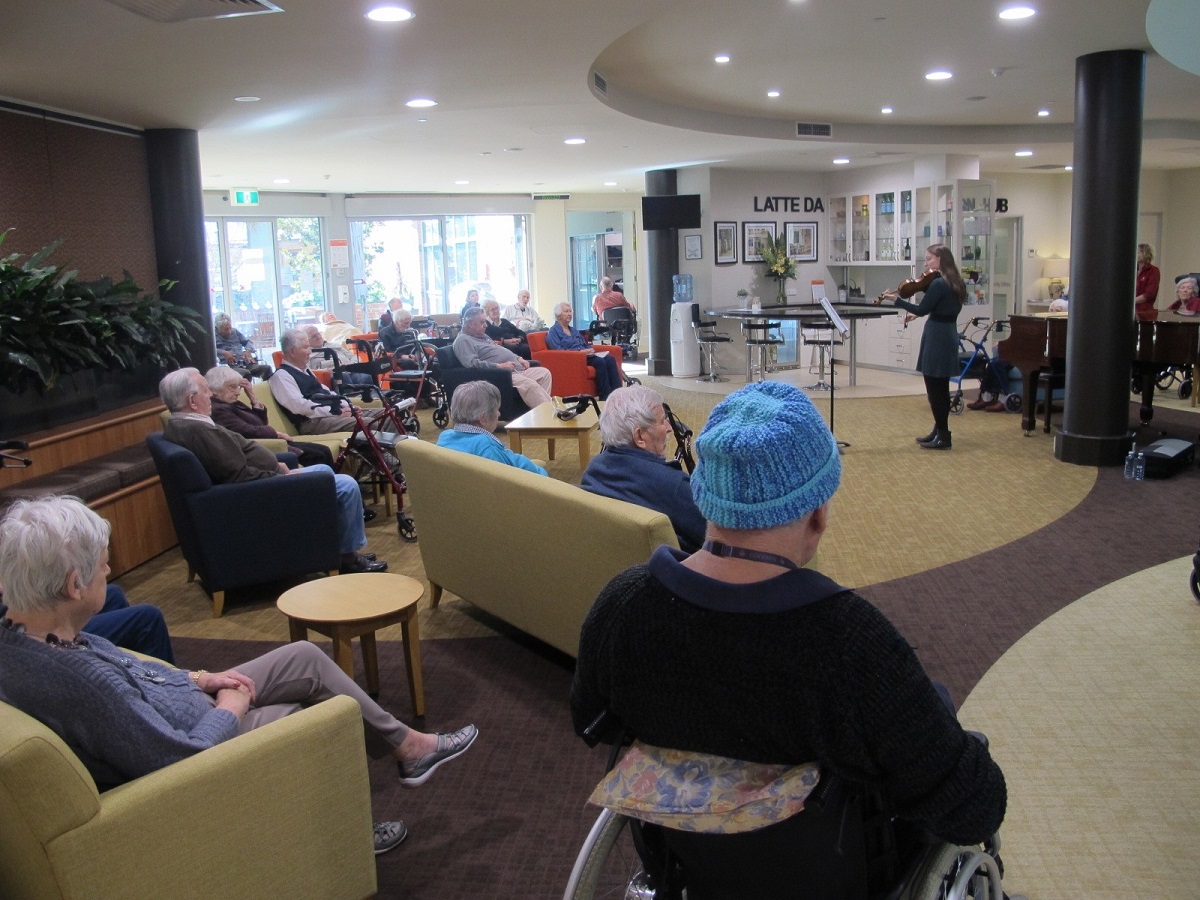 Built around twice-weekly 30-minute musical performances at Goodwin House Ainslie, the program was delivered in partnership with Goodwin Aged Care Services – where Heather was on placement at the time – as well as energy provider ActewAGL.

“We wanted to create a new community program for people living with dementia, and to quantify the program results, so that we could show the community that it works,” says CSO bassoonist Kristen Sutcliffe, who oversaw the program.

Heather undertook the literature review for Music and Memory – in regular consultation with the CSO – then went on to help design many aspects of the program, including personalised playlists for each concert.

“The concerts consisted of mostly strings – violins, cello, double bass combinations. And we had one duo of French horns, for something a little bit different,” says Kristen. “Every concert started with You Are My Sunshine, and ended with Almost Like Being in Love, from Brigadoon. The repetition helped to create a feeling of safety and security.

“Most of the residents remembered the program, with many looking forward to it – even for those who forgot it five minutes after it was over, there were still positive changes in behaviour.” 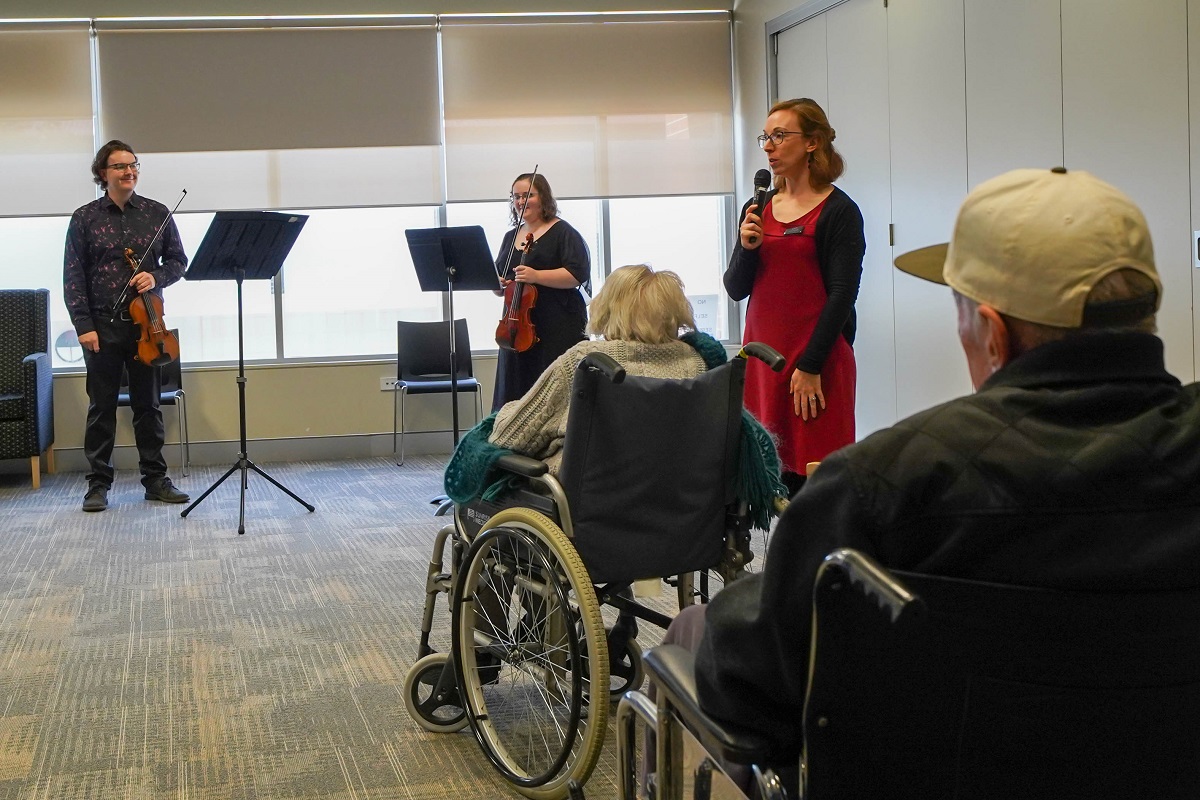 To help design the program, Heather played violin solos for the residents over several weeks, to determine what kind of music resonated with them and build personalised playlists. COVID-19 regulations saw her audiences capped at 10 people each time.

“It had to be music they both liked and remembered,” she says. “Old wartime songs like Vera Lynn’s Lili Marlene and We’ll Meet Again were particularly popular. At first, they were a bit unsure and reserved … and then they’d just get completely into it, often singing along.

“I’d ask for requests too, and then go home and learn the songs to play the next time I came back. And introduced one or two songs they weren’t familiar with, like Sarie Marais, an old Afrikaans love song, which they just loved. 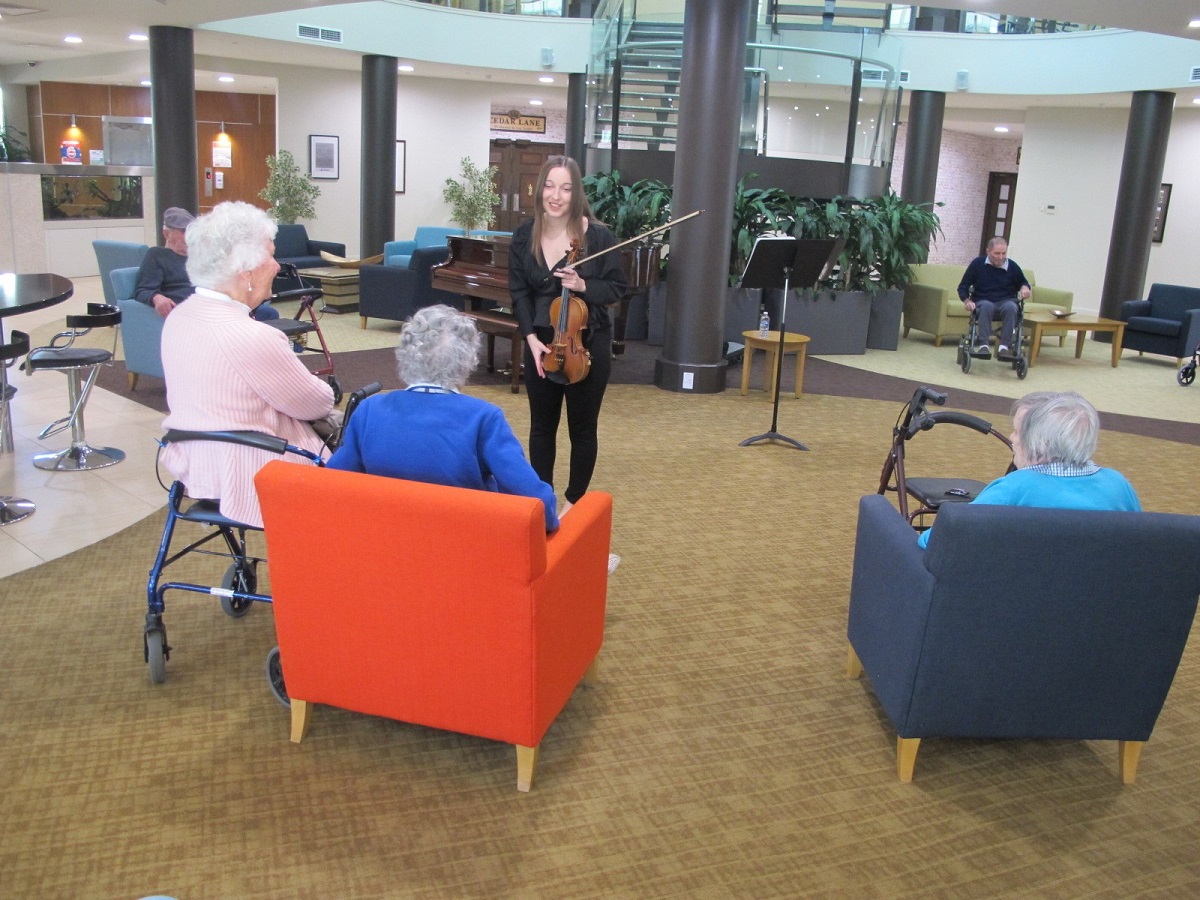 “Music isn’t about you – it’s a gift you share with other people. Part of this program was about playing for the residents, but it was also about being there and really listening to them when they wanted to talk.

“There was this one particular gentleman who really wanted to show me his own violin. He was very enthusiastic and his violin was a beautiful antique, made in the 1700s – he even let me play it.”

These are the personal moments that will always stay with Heather – and the study results have buoyed her interest and confidence that music can significantly help dementia patients. 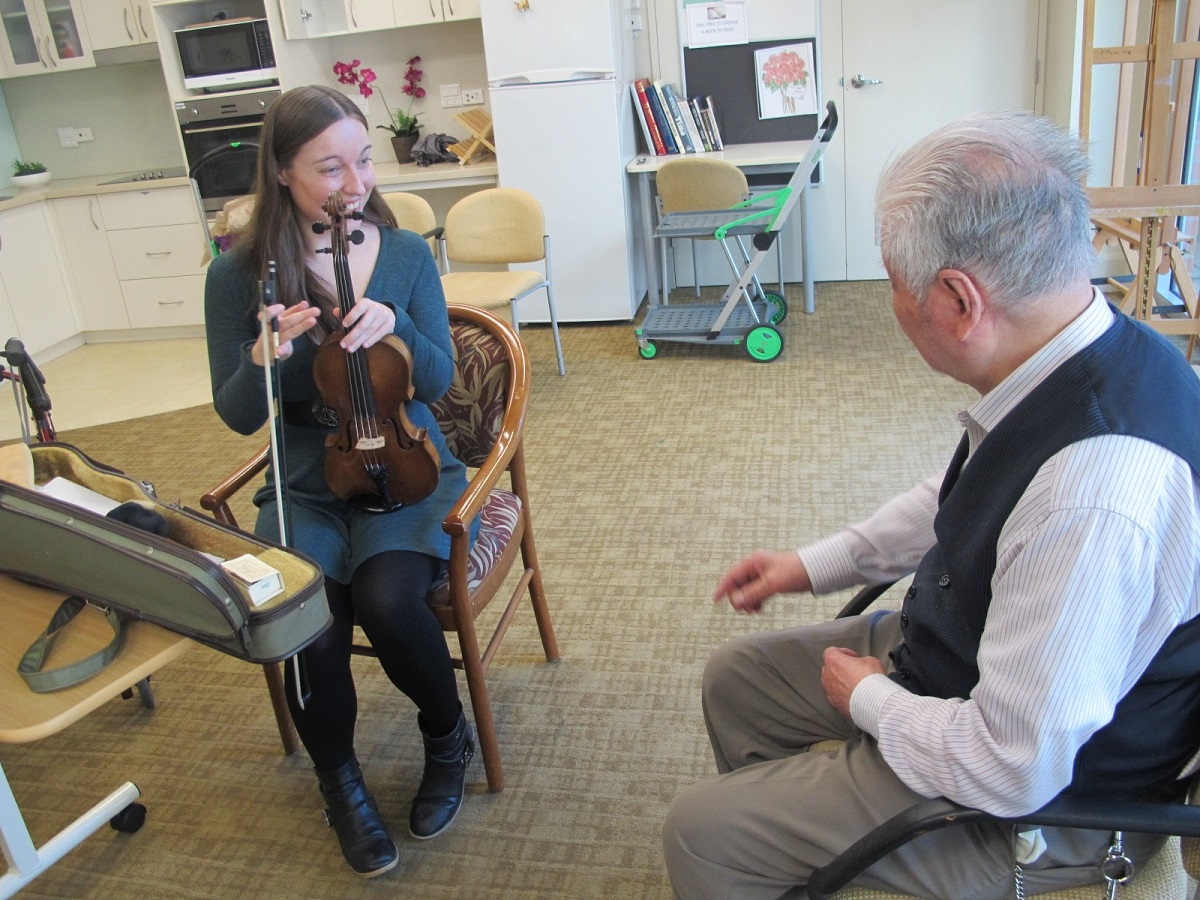 Participants’ symptoms were reviewed just before the program started, at four weeks into the program, and then again at eight weeks. The results were statistically significant.

“The study results showed that the music catalysed a great reduction in restlessness, insecurity, and repetitive behaviours, as well as a reduction in aggressive and inappropriate behaviour,” Heather says. “It also indicated that the more frequent the musical intervention, the better the results.”

Ultimately, it’s her love of music and deep-seated empathy that drew Heather to study Psychology at UC, after initially getting a Bachelor of Professional Music Practice (Instrumental Pedagogy) from the Australian National University.

A seasoned music teacher – clarinet, saxophone, piano, flute and voice, as well as violin – she has found a connection with many of her students that transcends the sharing of a skill.

“I find that especially with the younger students, it was about more than just learning an instrument or a skill. It was about forming a connection. They’d talk about their lives, and ask my advice, and I found myself really liking that aspect of our lessons.

“One of my clarinet students was a teenager with early onset schizophrenia, and there just aren’t many specialists available to help deal with that – but playing the clarinet seemed to help her, it gave her something to focus on. We’d play her favourites – a little Taylor Swift, Panic at the Disco.”

Heather plans to become a practising psychologist, and will no doubt draw further on her unique connection to music in her future career.

“I am particularly interested in how people deal with chronic mental and physical illnesses and conditions, how they make life more manageable,” she says.

“Music has really helped me in terms of living with a chronic illness, especially when it comes to my self-esteem – it helps me remember that I am more than my illness.”