While research focusing on a cure for dementia is important, initiatives that improve the quality of life for those living with dementia now are just as crucial, says University of Canberra researcher Nathan D’Cunha.

And he’s really gotten to the ‘art’ of the matter.

A sessional academic in Nutrition and Dietetics at UC’s Faculty of Health, Nathan embarked on his PhD journey in 2018 and has devoted himself to research on dementia.

While studying for a Bachelor of Human Nutrition (Honours) degree at UC, he spent a year investigating whether a diet rich in B vitamins could reduce the likelihood of Alzheimer’s disease in women. He is also currently involved in a pilot study to investigate how Virtual Reality can bring physical, emotional, mental and social benefits to aged care residents living with dementia.

Nathan’s work is driven as much by personal connections, as it is by zeal for research – his grandmother spent the last few years of her life wrestling with vascular dementia; in 2015, Nathan’s mother was diagnosed with younger-onset Alzheimer’s disease.

Now, his latest study published in the Journal of Alzheimer’s Disease shows that initiatives like the National Gallery of Australia’s (NGA) Art and Dementia program hold very real benefits for the wellbeing of people living with dementia – and the research team underscored these findings by testing participants’ saliva. 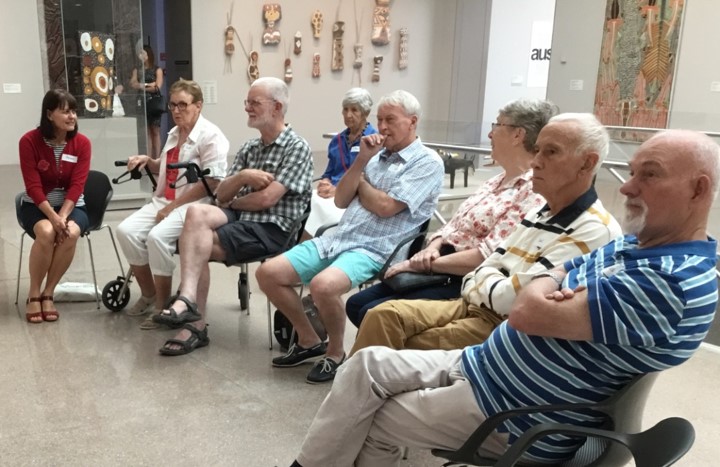 The Art and Dementia program, helmed by program producer Adriane Boag, has been running at the NGA for over 12 years.

“This research points to the future and supports what arts professionals have known: that participating in a program at a gallery has positive effects on mental and physical wellbeing,” Adriane said.

The research team monitored new participants of the Art and Dementia program over six weeks, investigating stress and inflammatory responses, in a non-invasive study that is the largest of its kind in the world to measure biomarkers.

“We tested their saliva to determine levels of cortisol, as an indicator of the efficacy of the program,” Nathan said.

Cortisol is best-known as the main stress hormone, but it plays an important physiological role regulating mood, the cycle of sleep and wakefulness, and blood pressure, among others.

“Normal cortisol levels are usually high upon waking, then drop throughout the day and bottom out at bedtime,” Nathan said. “In people living with dementia, this rhythm can be disrupted, resulting in increased frailty, agitation and decreased cognitive performance.”

Six weeks after attending the program, Nathan noted that their waking-to-evening salivary cortisol ratio improved, and returned to baseline levels at a later follow-up.

In addition to the saliva tests, study participants answered questionnaires that investigated quality of life, depressive symptoms, cognition, and wellbeing, pre- and post-program.

“Six weeks after the study, we asked participants what they remembered of the visits, and almost 50 per cent were able to recall specific aspects of the program,” he said. “92 per cent of those responded that they very much looked forward to the visits to the NGA.”

“All this further supports the fact that initiatives that increase and encourage social engagement are integral to higher levels of wellbeing for those with dementia,” Nathan said.

“Social engagement is extremely valuable for people living with dementia, and we need more studies into initiatives like this – particularly since there are many places that can support them,” he said. 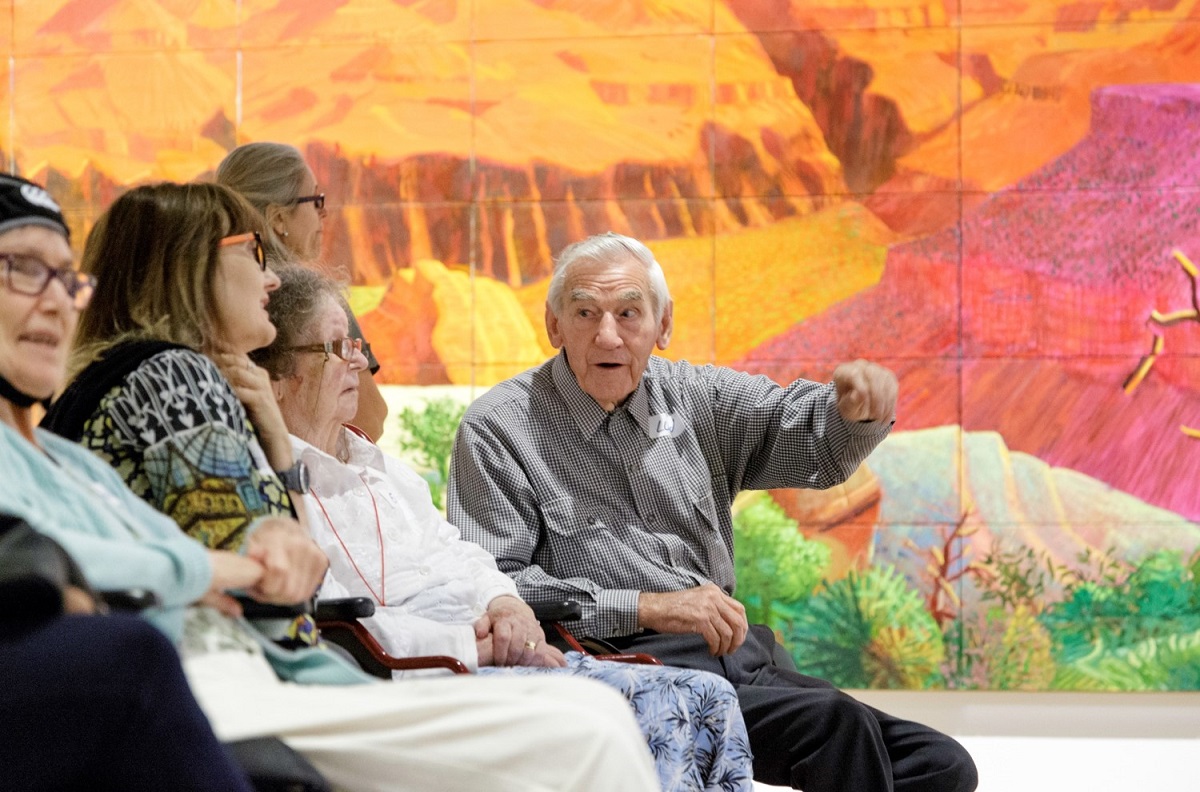 In the end, Nathan said, it didn’t matter if the participants actually liked the art – it was the engagement that mattered.

“The discussions were animated, extensive … and often hilarious,” he said.

Particularly the one the group had around Salvador Dali’s Lobster Telephone, as they offered opinions on just why a crustacean would top a telephone in the first place – “I don’t think I’ve ever laughed as much in my whole life!” Nathan said.

“It was important for participants to be able to draw on their own experiences, knowledge and viewpoints, and think about the art in new ways,” he said. “As well, to be able to engage with others and importantly, be treated with dignity and respect.”

Ultimately, Nathan believes that the study results are an important first step towards a larger controlled trial.

“This would not only ask people living with dementia about their experiences of engaging in regular art discussion, but also seek to understand their physiological responses using non-invasive methods,” he said.

“Nathan has played a pivotal role in the design of the study, data collection and interpretation of the results,” Nenad said. “His dedication, involvement and knowledge is something that is truly unique in this area of research.”

Nathan is looking forward to collaborating further with the NGA, and to generating more quantitative results to support a growing body of evidence that could make such a difference for so many. 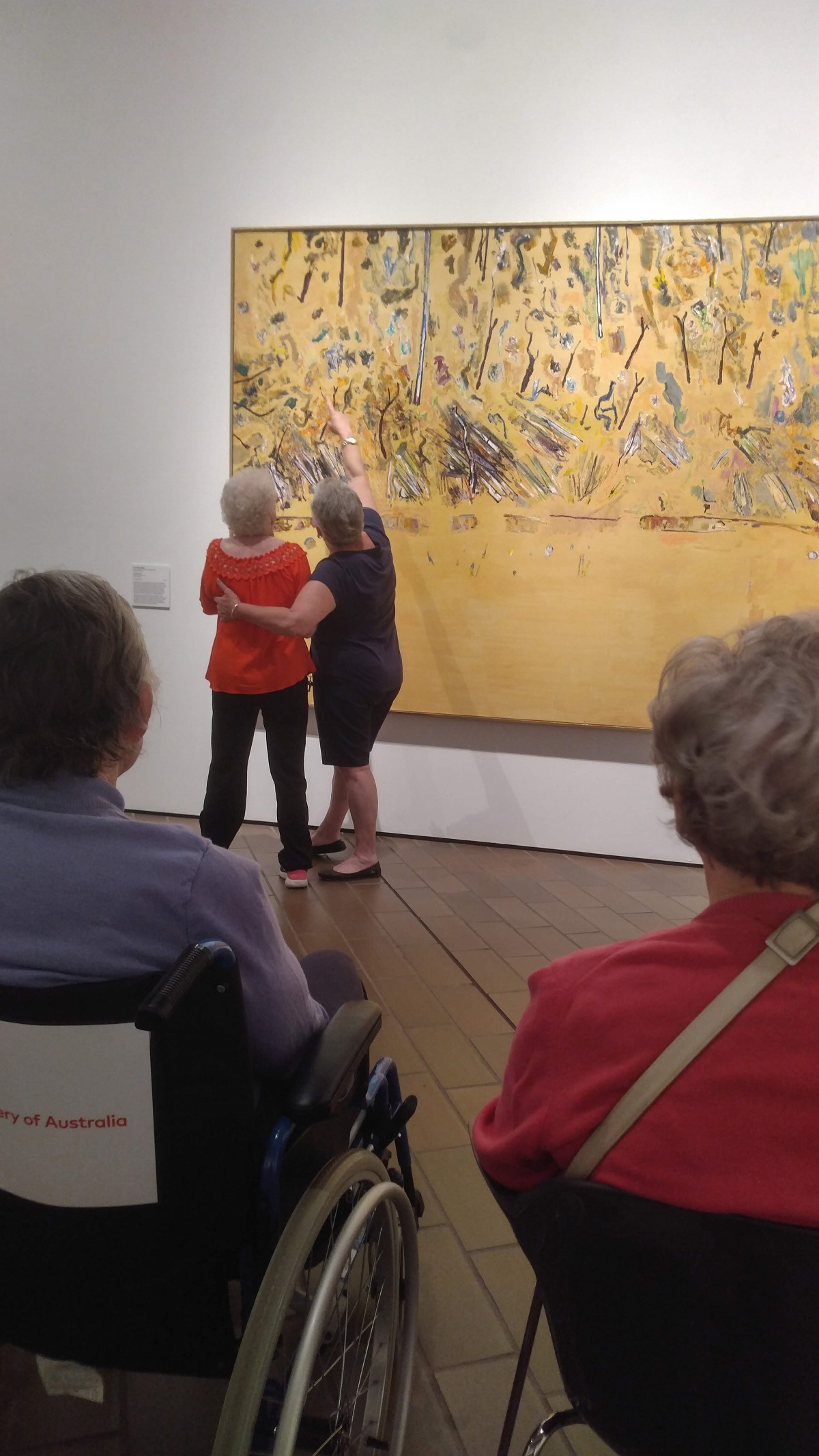 And the qualitative pay-off has been just as considerable.

“It’s been incredibly rewarding, to be able to work with these participants from aged care, to get to know them,” he said.

“To hear their perspectives, have them share their experiences – to see them light up when they arrive at the NGA. I feel very lucky to have been a part of this.”

Words by Suzanne Lazaroo, photos from Nathan D’Cunha, Tara Corcoran and the National Gallery of Australia