“There weren’t many people in there who looked like me.”

It changed the trajectory of her career, as she carved out a pathway dedicated to elevating and amplifying Indigenous voices across Australia.

One of the most experienced Indigenous Affairs reporters in the country, Natalie’s approach has always been to tell the stories of people, places, and issues through a First Nations lens. 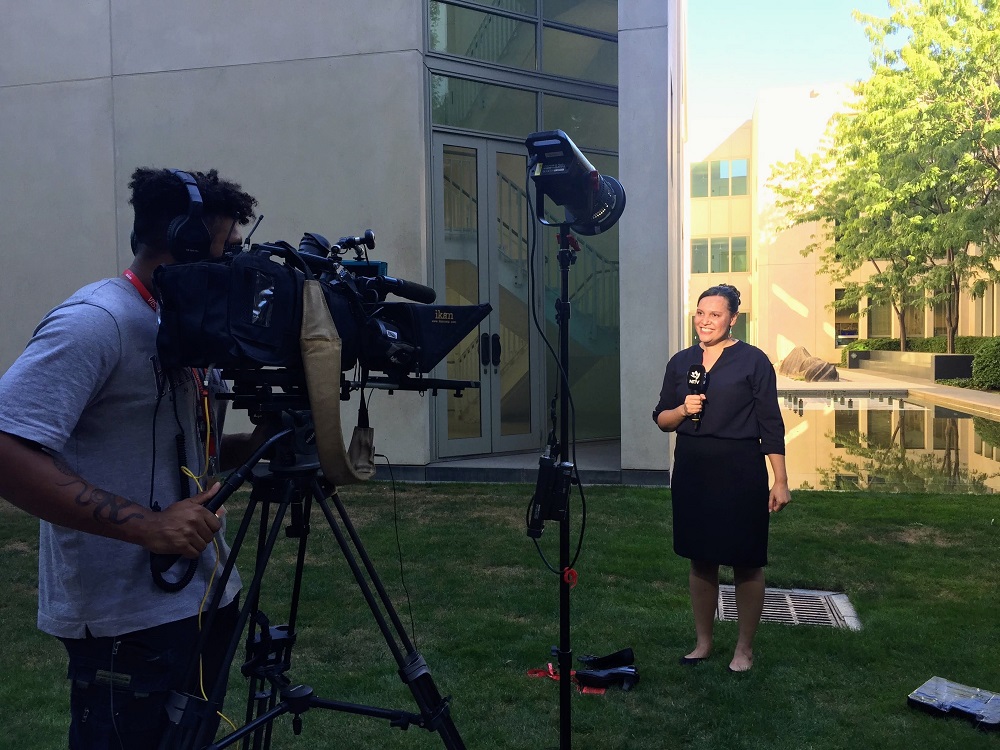 “It’s about bringing an Indigenous lens and embedding that perspective across all issues, rather than just Indigenous issues,” she says.

And Natalie has never forgotten the importance of representation, driven home by walking into that long-ago newsroom.

“There were certainly Indigenous media personalities when I started out, like Stan Grant and Ernie Dingo,” she says. “Malarndirri McCarthy, now Senator for the Northern Territory, was a newsreader with ABC Darwin when I first started working there, and my then-boss was senior sports commentator Charlie King – but there were still just a few of us.

“I was pretty well-supported when I started out, but I was the exception rather than the rule – and I have heard stories from my contemporaries of being the only Indigenous person in the newsroom. In some cases – the newsroom for the whole state!” 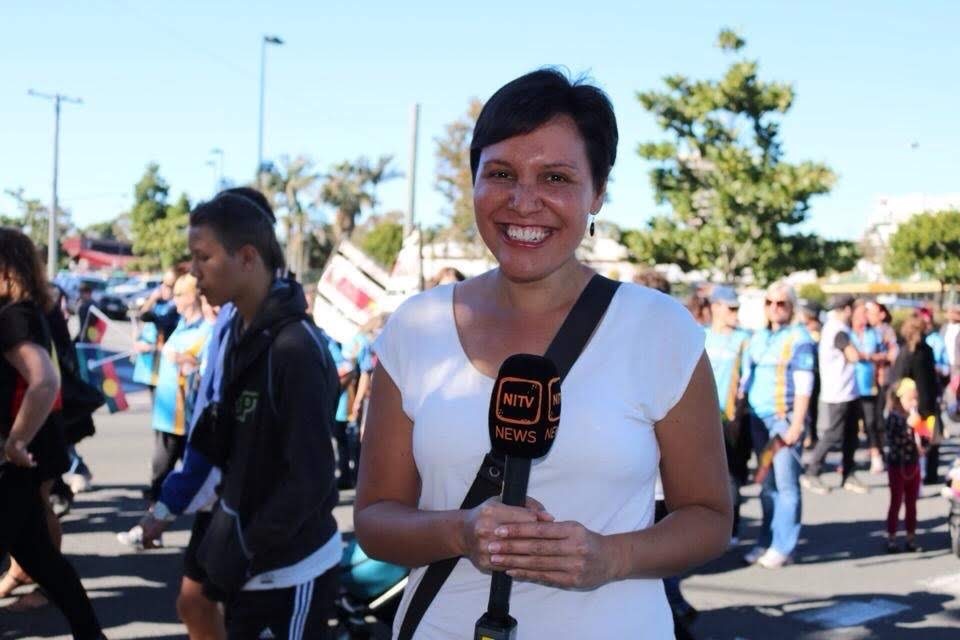 She’s also a regular contributor to The Point, NITV’s flagship current affairs program, and reports for SBS Word News. Since 2019, Natalie has hosted SBS and NITV’s Special Coverage and news updates on 26 January, reflecting on what the day represents to Indigenous Australians and providing audiences with a deeper understanding of First Nations perspectives and history.

She has travelled across the country to cover many significant events, like the Garma Festival in north-east Arnhem Land – which she is extremely excited to return to this year, after the COVID-19 pandemic made that impossible for the last two years – as well as the Uluru First Nations Constitutional Convention and the National NAIDOC Awards.

The award-winning media personality was named Journalist of the Year at the 2015 Multicultural and Indigenous Media Awards and the 2012 Deadly for Community Broadcaster of the Year.

This year, Natalie is a finalist for a Chancellor’s Lifetime Achievement Award at the University of Canberra’s Distinguished Alumni Awards. 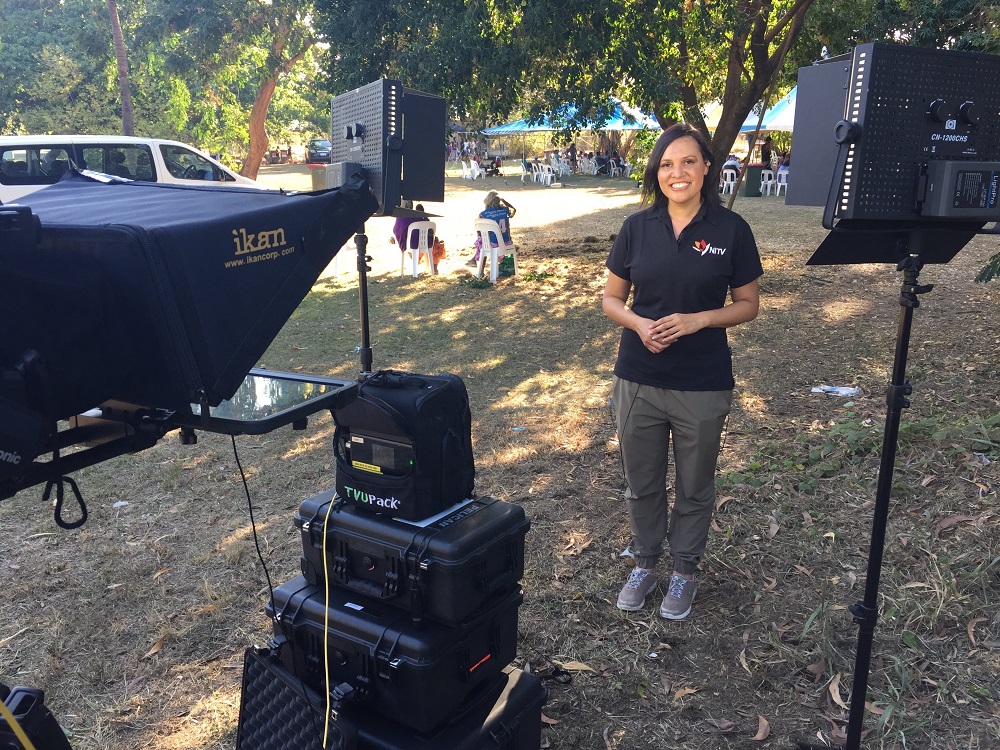 It all began as a 13-year-old who decided to be a sport reporter.

“At school, I loved English and the Humanities subjects, especially History,” Natalie says. “I was passionate about sport. I liked the idea of getting to tell people’s stories – and not doing a typical nine-to-five job really appealed!”

With this plan in mind, Natalie completed a Bachelor of Applied Science in Sports Studies (Sports Media) at UC. Newly-graduated, she started off as a sport journalist and presenter with ABC Northern Territory and National Nine News in Darwin.

“When I first started in the industry, there was little in the way of Indigenous media beyond community radio stations and really remote community media,” Natalie says.

“We didn’t have a national Indigenous television platform, and Indigenous issues were seldom covered by the media in the way that they are now.” 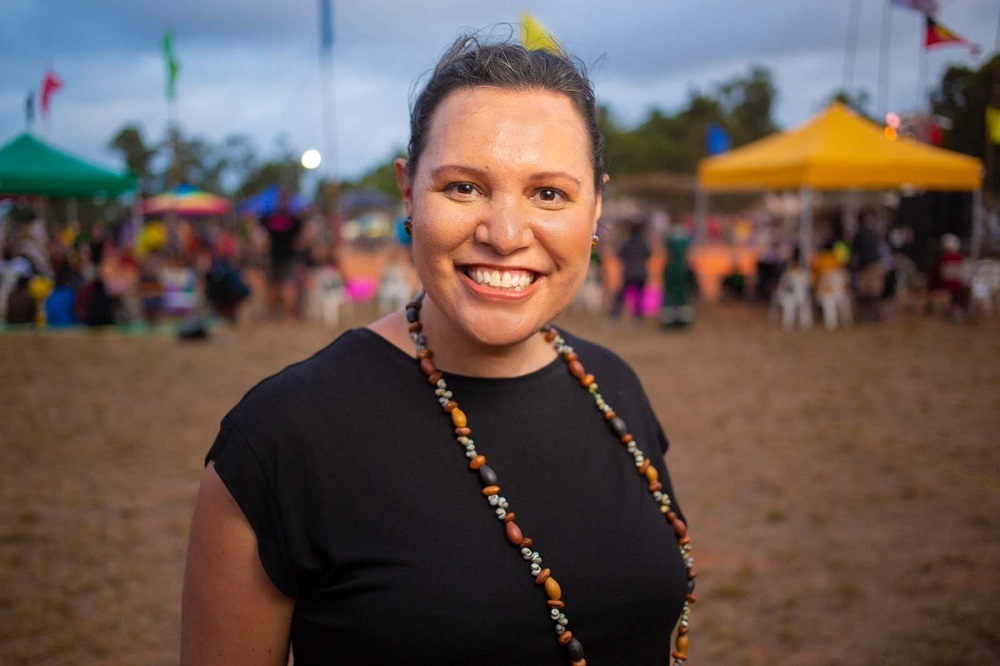 In her early postings to Darwin and Alice Springs, Natalie found that as an Indigenous journalist, the Aboriginal community responded to her differently.

More often than not, they were coming to her with a question – why were community-based stories always reported on in a particular way?

“A negative way,” she says, because that seemed to be the lens usually applied to any story on Indigenous peoples or issues.

“Sometimes, even if it wasn’t negative, it was still portrayed in a very superficial, surface-level way. For instance, there is often a lot of trauma in our communities that wasn’t reflected in the reporting – just facts and figures, without looking at the nuances, the underlying and contributing factors.

“And I was also very surprised at the number of stories on Indigenous issues that were reported without featuring a single Indigenous voice.

“I realised that there was a responsibility to community to do what I could, to try to make sure stories are told as accurately as possible – bringing context, nuance and understanding to the table – and to include Indigenous voices every time.” 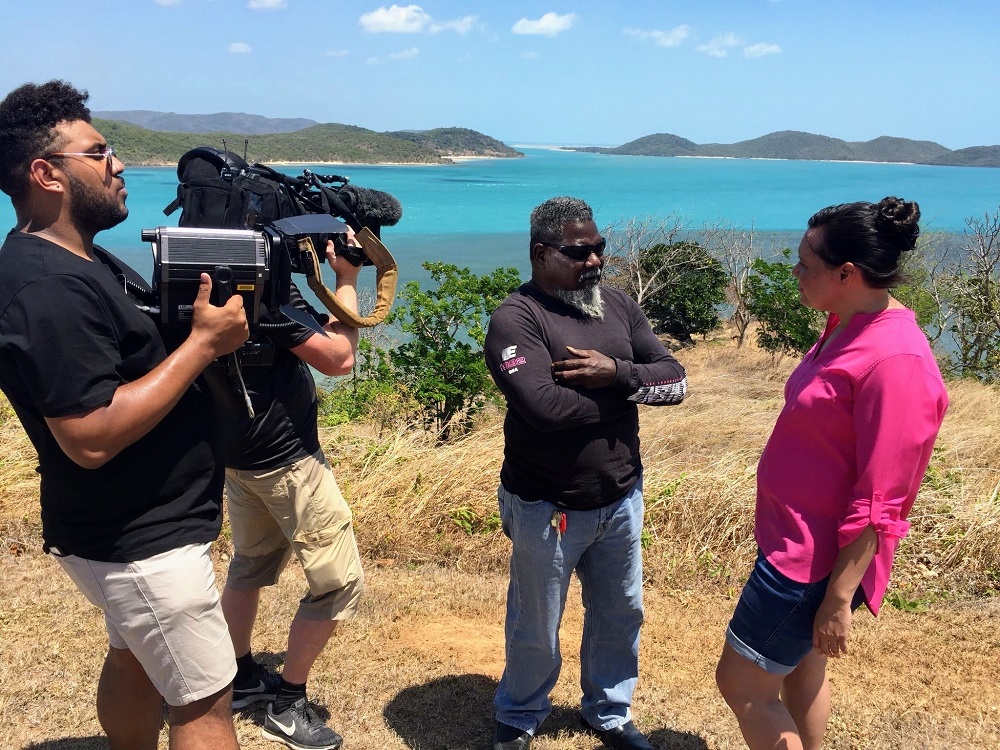 Particularly when those voices are raised about an issue that affects the same community – ‘nothing about us, without us’, after all.

“We're looking at going to a referendum on the contents of the Uluru statement – Voice, Treaty, Truth. If we don’t have Indigenous voices in the media talking about why this issue is so important, how do people understand what they're being asked to vote on? That’s just one example of why we need a plethora of voices.

“And from what I’m hearing, many non-Indigenous people want to hear from us, to understand our lived experience, to know how to be better allies to us.” 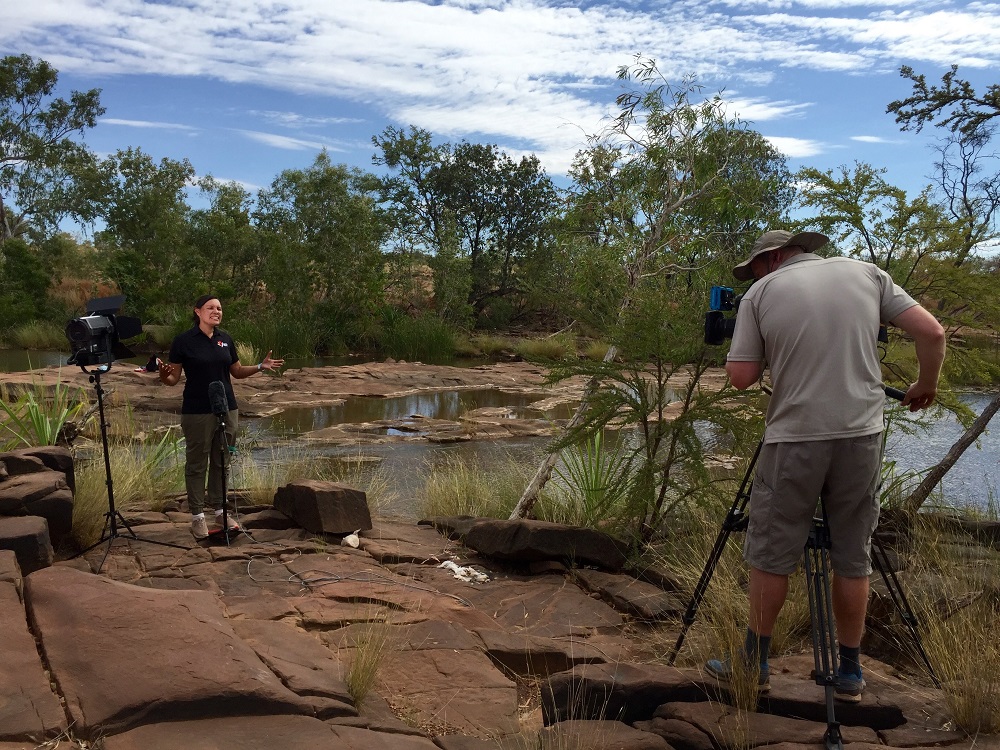 The NITV News team members were enthusiastic early adopters of the technology that allowed them to broadcast on Country, featuring often-unheard voices from remote areas.

“As journalists, we have the community contacts that help us to reflect the diversity of Indigenous voices,” Natalie says. “You don’t want to just see a rotation of the same five faces pop up in the media all the time, commenting on all issues.”

Natalie loves reporting out on the road, and has broadcast from nearly 100 remote, regional and urban communities across mainland Australia, including Broome and Kalgoorlie in Western Australia, South Australia’s Anangu Pitjantjatjara Yankunytjatjara (APY) Lands, Kalkaringi and Yirrkala in the Northern Territory, and Thursday Island in the Torres Straits.

“There is nothing like broadcasting on Country – to sit in the red dirt and tell a story, maybe have a cup of tea and pick up a couple of yarns. It’s a powerful thing,” Natalie says.

“It’s a great opportunity to connect with communities in remote and rural regions, and for them to see how we operate as well, to build trust and relationships. When the COVID-19 pandemic meant that we couldn’t travel for over two years, we were able to draw on those established relationships, and do our interviews remotely.” 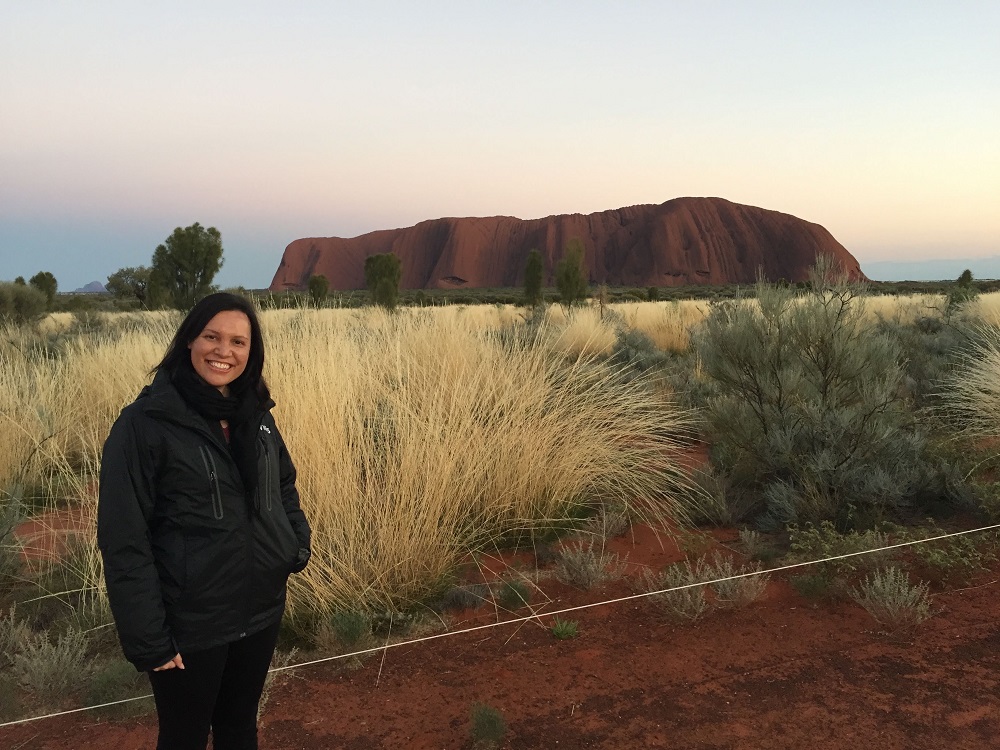 In the 22-odd years she has spent in the media industry, Natalie has seen – and pushed for – growth and change. And it’s happening, albeit slower than she would like.

“I think this year’s NAIDOC Week coverage in the media space was a great example, with so many Indigenous stories and voices featured,” she says. “In the mainstream media space, the ABC and SBS are very much leading the way – but we also saw things like Channel 10 using Indigenous place names on their weather maps.”

“People are starting to cotton on to the fact that true representation is not just about having Indigenous reporters and presenters, but amplifying and featuring a greater range of Indigenous voices.”

Natalie says that there are also more Indigenous journalists across networks who are reporting on matters other than Indigenous issues – like Brooke Boney, the Entertainment Reporter on Nine Network’s Today and Tony Armstrong on ABC’s News Breakfast.

“It’s great to see so many younger Indigenous journalists now coming through, there is so much talent out there,” says Natalie.

“What we need is more Indigenous people in higher-ranking, editorial decision-making roles. As well as Indigenous camera operators, editors, librarians and graphic designers. In order to make change, you need Indigenous people throughout the media landscape, not just out in front of the camera – because one story is created by so many people.”

Natalie Ahmat has been nominated for a Chancellor’s Lifetime Achievement Award at the Distinguished Alumni Awards.These will be held at the 2022 University of Canberra Night of Nights.

The Chancellor's Lifetime Achievement Award recognises alumni whose professional careers have had substantial and significant impact and contribution to their chosen fields, nationally and/or internationally.

Join us on 29 July 2022 for the Night of Nights, a community-wide celebration of the University, its alumni, outstanding research, and academic achievements. To get your tickets and for more information, visit this Eventbrite link.

Dirk Rose has wanted a connection to his Aboriginal culture as long as he can remember – and he is determined to uncover that link.