Pronouns? Just Ask, Robin Ladwig’s t-shirt invites us. And with a design as multi-layered, colourful and nuanced as gender expression itself, their Friday ‘fit is at once a celebration of gender diversity, a distillation of their research into the same, and a call to action.

Robin is wearing a design they teamed up with artist Saffaa to create for this year’s Shirty Science initiative. The design feeds into their research as a PhD candidate with the University of Canberra’s Faculty of Business, Government and Law, as they investigate the workplace experiences of transgender and gender-diverse populations. 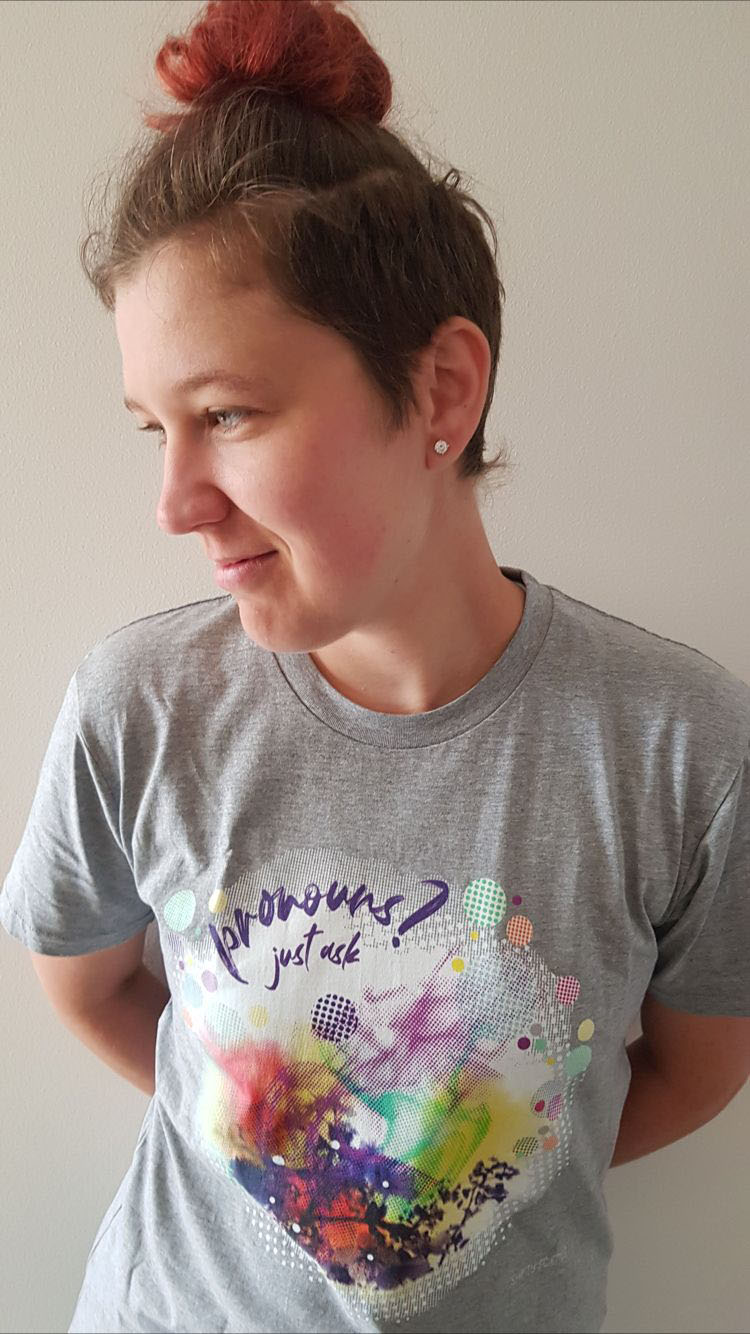 “Between 0.3-4.5 per cent of adult Australians identify as transgender and gender-diverse, and my research has identified that they face a high level of workplace discrimination and unemployment because there is still a limited awareness of gender diversity in work environments here,” they said.

Misgendering – using the wrong pronouns, titles, or binary and exclusionary vocabulary – is a key aspect of this discrimination.

“Ask, in a respectful way, about someone’s pronouns, about how they identify,” said Robin. “Gender is a social construct, and the reality is that it is complex and diverse. We need to move past an assumption of or insistence on a gender binary.”

This is the first year they’re getting involved with Shirty Science, but Robin figured it was a great way to reinforce the message of being more gender inclusive.

“My research is all about people, and for people – so it’s important that the things I discover are communicated in a way that is accessible and collaborative, in a way that speaks to many,” they said. “Shirty Science is a wonderful way to tell a story of research and science, and that’s what makes it so beautiful.”

Shirty Science is an extremely cool initiative – and admirably disruptive too, if your idea of science and research always involves lab coats and test tubes.

Created by science communicator Madi Hartill-Law in 2016, it sees scientists and designers team up to create t-shirts that spark questions, conversation and discussion about research.

Shirty Science is also a social enterprise, so emergent designs are sold worldwide, and all profits go to organisations that support diversity and inclusion in STEM. This year, that organisation is STEM Sisters, which takes an intersectional approach to empower women of Colour in STEM fields.

“Madi reached out to me after seeing a SAGE [Science in Australia Gender Equity] presentation on my research – she thought it would be a cool idea translated this way,” Robin says.

The process began with a virtual session – speed friending-style – to see which researchers and designers were best suited to working together.

“Saffaa and I were on the same page from the start, not least because we both use ‘they/them’ pronouns and have that shared understanding of the fluidity of gender,” Robin said. “From the start, I knew what I didn’t want in a design – no stereotypical symbols, or trying too hard to represent the whole of gender diversity by using images of people, because that way would only be able to capture one small aspect of the whole.”

They decided to focus on the usage of pronouns because it allowed a simple, clear and actionable message to be communicated.

“Basically, the design reflects the individuality and diversity of expression – and the reminder to ‘just ask’ is also a reminder to simply be gentle with each other, to understand and celebrate rather than judge or force someone into a box,” Robin said.

Use this link to purchase any (or all!) of the Shirty Science t-shirts available this year.

For Canberra artist Tommy Balogh, the opportunity to collaborate with the University of Canberra on a piece of art has been invaluable.