The opportunities for an artist to travel and work abroad are plentiful – that’s certainly the case for Canberra painter Tommy Balogh.

And although he’s been commissioned for work throughout Europe, he still calls Canberra home. His latest foray into the creativity realm is a collaboration with the University of Canberra and the Canberra Centre, with a piece entitled Brain Storm.

Tommy first burst onto the art scene in Canberra in 2016, after an exhibition of his work was featured in New Acton’s Nishi Gallery. From there, he worked with the team behind Sydney’s Vivid Festival to translate his art into building projections; all while running his own art studio in the City West carpark.

When the COVID-19 pandemic hit, Tommy was forced to close his studio and adapt.

“COVID essentially meant I had to shut down my studio at the City West carpark and so I opened up my own home studio, landscaped the garden which created space for me to paint outside, and shifted everything around so I could create from home,” Tommy says.

“Then I basically used the magic and potential reach of social media to expose my work to the world.”

He also used the experience to shape his work.

“I created an exhibition at the height of COVID that was intended to be a bit of a refuge for those who viewed it,” Tommy says.

That exhibition connected him with UC’s Director of Marketing, Ashley Zmijewski, who suggested that Tommy work with the UC design studio team to create the Brain Storm piece. 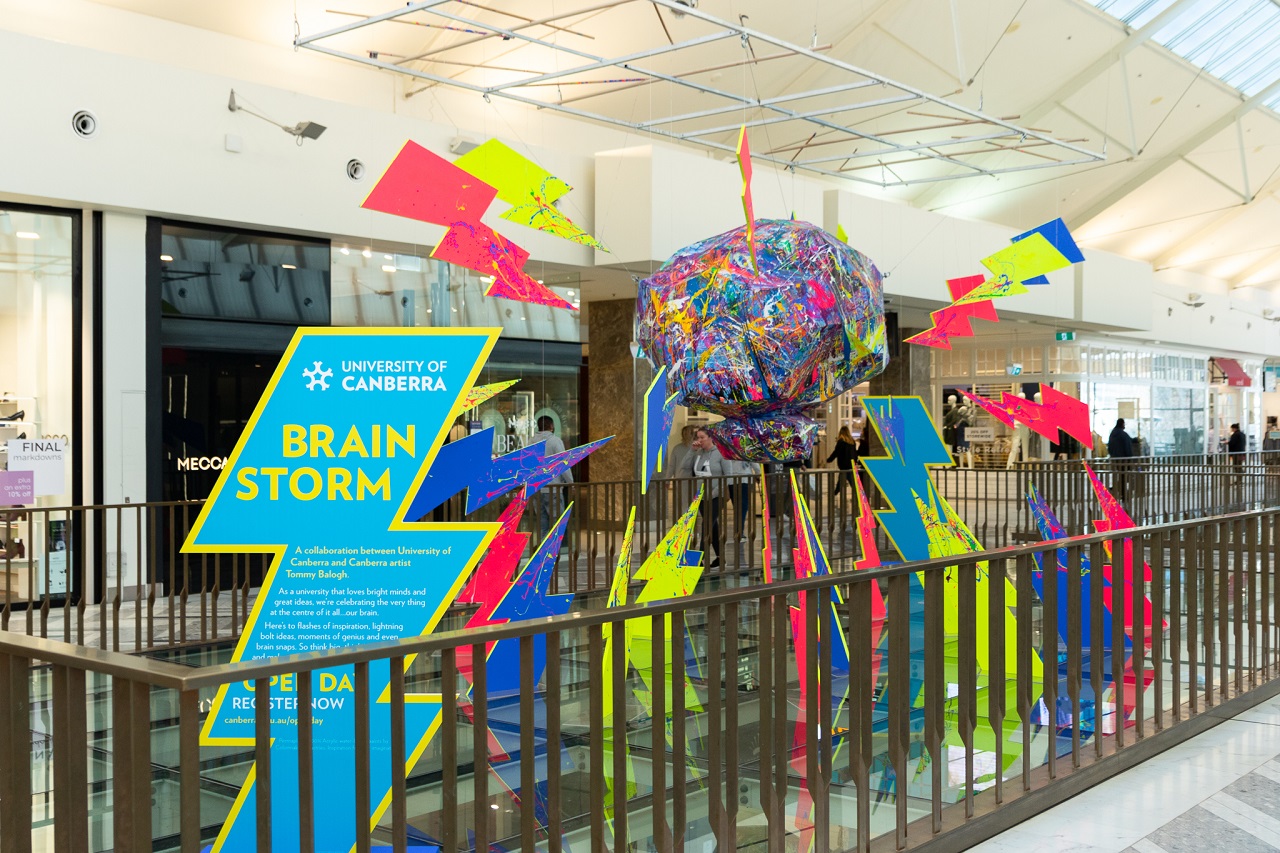 The piece intends to represent the bright minds and great ideas that are fostered at UC, as well as encourage viewers to think big, think bright, and to create their own future.

“I loved the concept of Brain Storm because it allowed me to be able to inspire people and other artists to think outside the box, including myself,” Tommy says.

“It’s a new-age movement that encourages people to keep rising.”

The Brain Storm installation comprises a model of the human brain pulsating with colour and movement (created using 100 per cent acrylic paints by Permaplastik and Permaset). The brainstorm piece is surrounded by lightning bolts, painted in Tommy’s unmistakable splatter and spark style.

Throughout the design and creation process, Tommy’s idea of what the final product would look like continued to evolve.

“Often when creating a piece of art, I let the process shape what the finished product or piece will be, through the process of discovery. There was a definite design brief for this project, but it quickly shifted with Brain Storm,” Tommy says.

“Every time I was at the painting site, I would see how the piece was morphing and transforming. Each new layer vibrating with the previous, soon the piece was harmonising as one and becoming something special; something whole. To create something like this was truly wonderful.”

And although he spent many late nights away from his family on the ground floor of Cooper Lodge, where he worked on the piece, he says that his wife and two children have also benefited from the collaboration with the University. 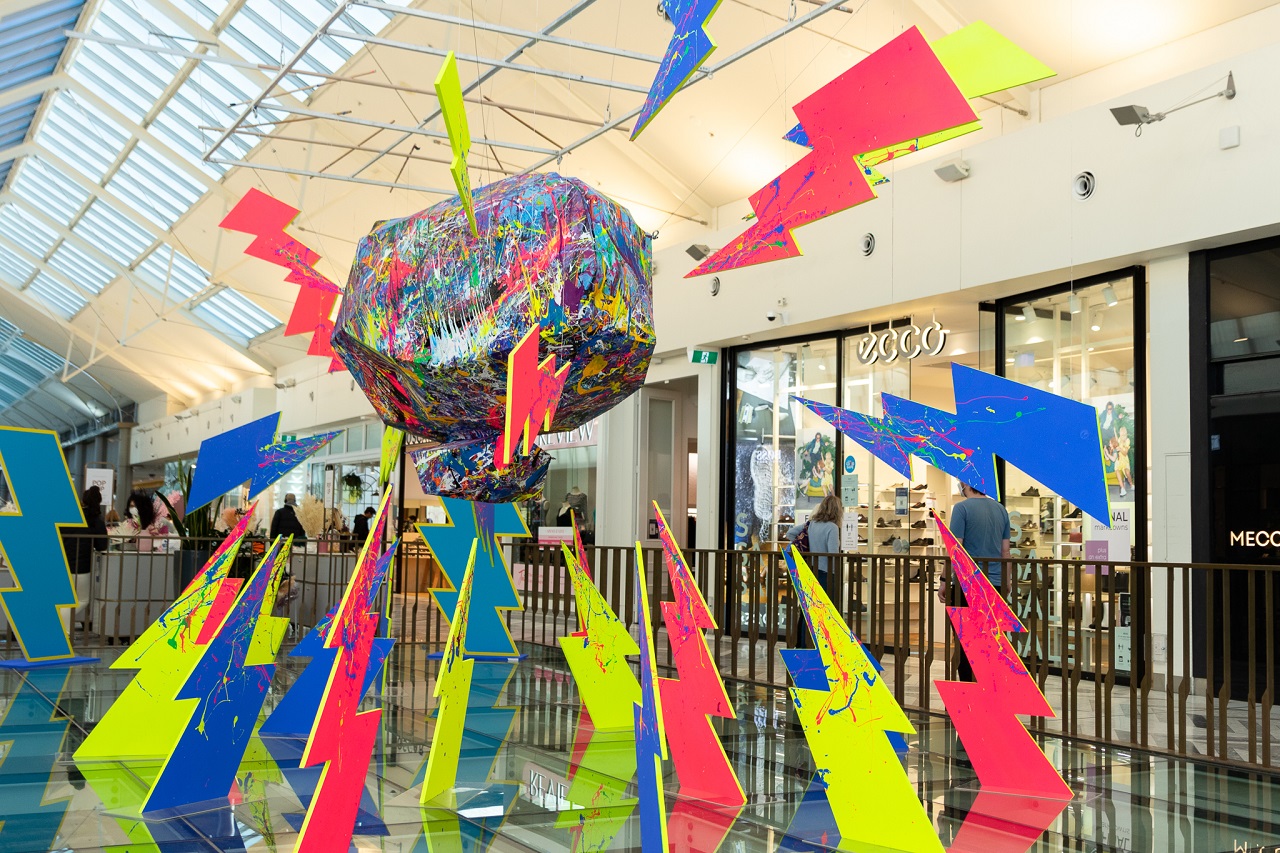 “Collaborating with local artists is so much more than just raising their profile and getting their work out there, it’s a relationship built on trust and on pushing things further together,” Tommy says.

“My family and I are very grateful to UC for helping the families of artists during this time and for pushing these boundaries. I feel honoured to have been given an opportunity to create these sparks especially during this pandemic.”

“It all starts with a spark.”

Tommy Balogh is a multi-disciplinary Australian artist who fuses organic abstract art with light to create a new discipline in his ‘Living Art’ concept. He is known for his large format light reactive pieces, especially the 12m Voyage artwork that aired on ABC TV in 2016 for his exhibition of the same name at the Nishi Gallery. He has also been invited for private residency to Studio Kybra, Germany by the founders of Vivid International Light Festival and has been featured more recently in Artoze, Dubai art magazine in 2020. Currently he is collaborating with international lighting company LIFX on interactive art systems and opening up his own line of unique art apparel.

Tommy’s Brain Storm piece is currently on display at the Canberra Centre.