Ten years ago Turia Pitt had her career mapped out. She was a mining engineer, working in the Kimberleys. One day, she planned to be CEO of a global firm.

“That never happened,” Turia told an engrossed audience at the National Press Club in Canberra, “I entered an ultramarathon, I was trapped by a grassfire during the race. I received burns to 65 percent of my body [and] spent six months in hospital and I was told that I’d never run again.”

“So what did I do? I rewrote my story. I reinvented myself,” Turia continues.

The evidence of this fact stands before us, larger than life telling one amusing and powerful anecdote after another. (Later, Turia privately tells me in the NPC boardroom that she’s learned to use humour as a way to get people to pay attention to the things she cares about.)

There’s the story about Frank, the gangsta-like physiotherapist who taught her to walk again, while Turia sobbed into his thick gold chain from the pain. There’s the yarn about how her husband, Michael, brought in the pest exterminators right before a film crew arrived. The driveway was littered with a carpet of dead cockroaches.

“The hair and makeup artist and the stylist were just looking around and looking at me. And I was just like: ‘So great to meet you! Welcome to my home! Come on in. It’s so great to have you here!’ So I just literally pretended I couldn’t see them,” Turia recalls to a chuckling crowd.

But it’s not all laughs. The athlete and best-selling author has some serious messages for those attending the Women in Media address. 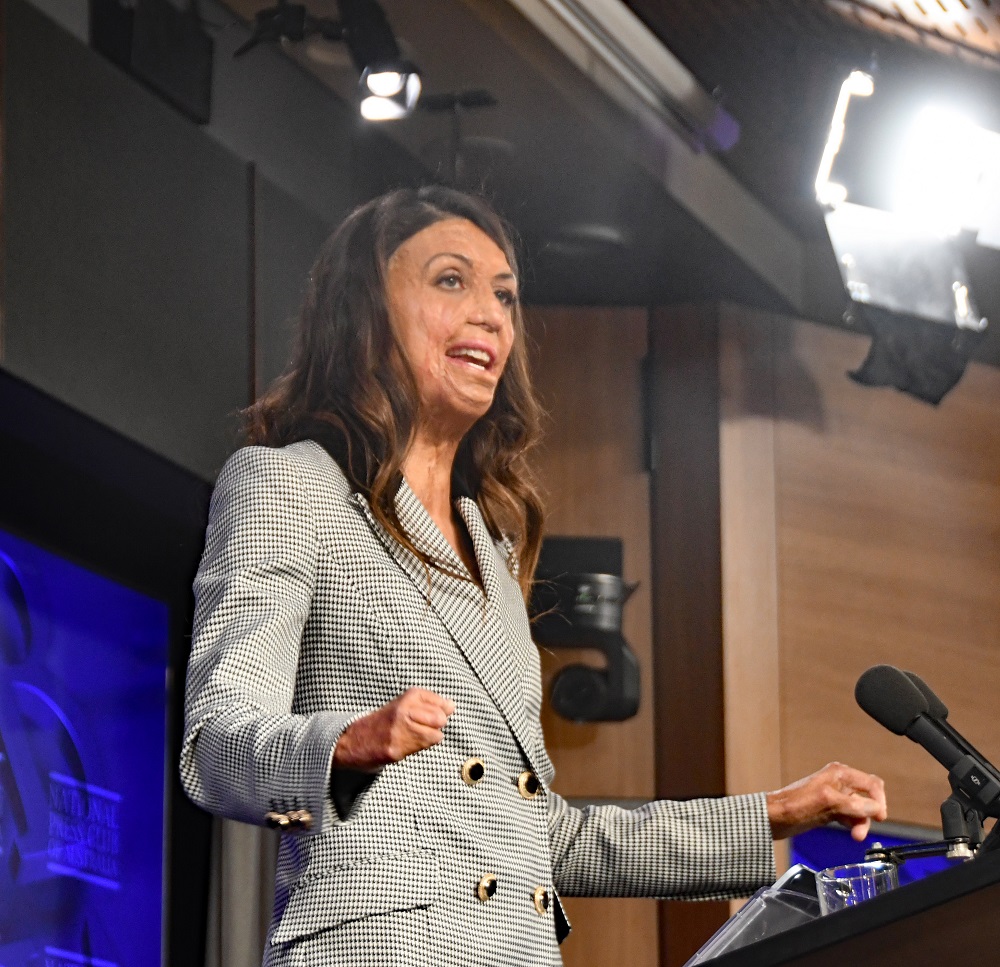 Reflecting back on the agony of her rehabilitation, she says: “I remember thinking: ‘I can’t even stand up by myself. How the hell am I going to be able to walk again? Run again? Compete again? And I realised that day that I couldn’t think too much about what my future would look like…And so I choose to literally just focus on one step at a time.”

Day after day, Turia worked at getting well: “You guys are all presumably really high achievers, so you would know this already: being consistent is what drives results.”

Despite all her personal and professional successes, Turia explains that there are still days when seemingly small things related to her injuries get her down.

The example Turia gives is a harrowing story about finding herself in a New York subway station, unable to pick up the change from the ticket seller after purchasing her ticket. She was apparently holding up the queue, and the man screamed at her.

“I was travelling to the NBC [TV Network] premiere of the Ironman event that I had competed in, and in that moment it felt as if all of the work I had done up to that point was futile because I couldn’t do this simple, ordinary task of taking my change for my subway ticket,” she says.

Although Turia is grateful for the opportunities the media has afforded her – and that generally she has a strong relationship with the press – she notes that journalists aren’t always respectful.

Recounting the story of a recent interview, a reporter who (she refuses to name) hounded her with tasteless and inappropriate questions.

“He asked me what it was like to have people stare at me, how I could possibly come to terms with my changed appearance and how my partner could find me attractive. And then, he questioned me as to why I’d been on so many of my book covers, and justified this line of interrogation by saying: ‘I’ve written 3 books, and I’ve never been on the cover of any of them,’” Turia recalls.

With characteristic humour, she retorted: “Well mate, no one knows who you are so obviously putting you on the cover would not be a selling point.”

(But as an aside, might I say that this is both sexist and ableist questioning and does not adhere to the Journalist Code of Ethics.) 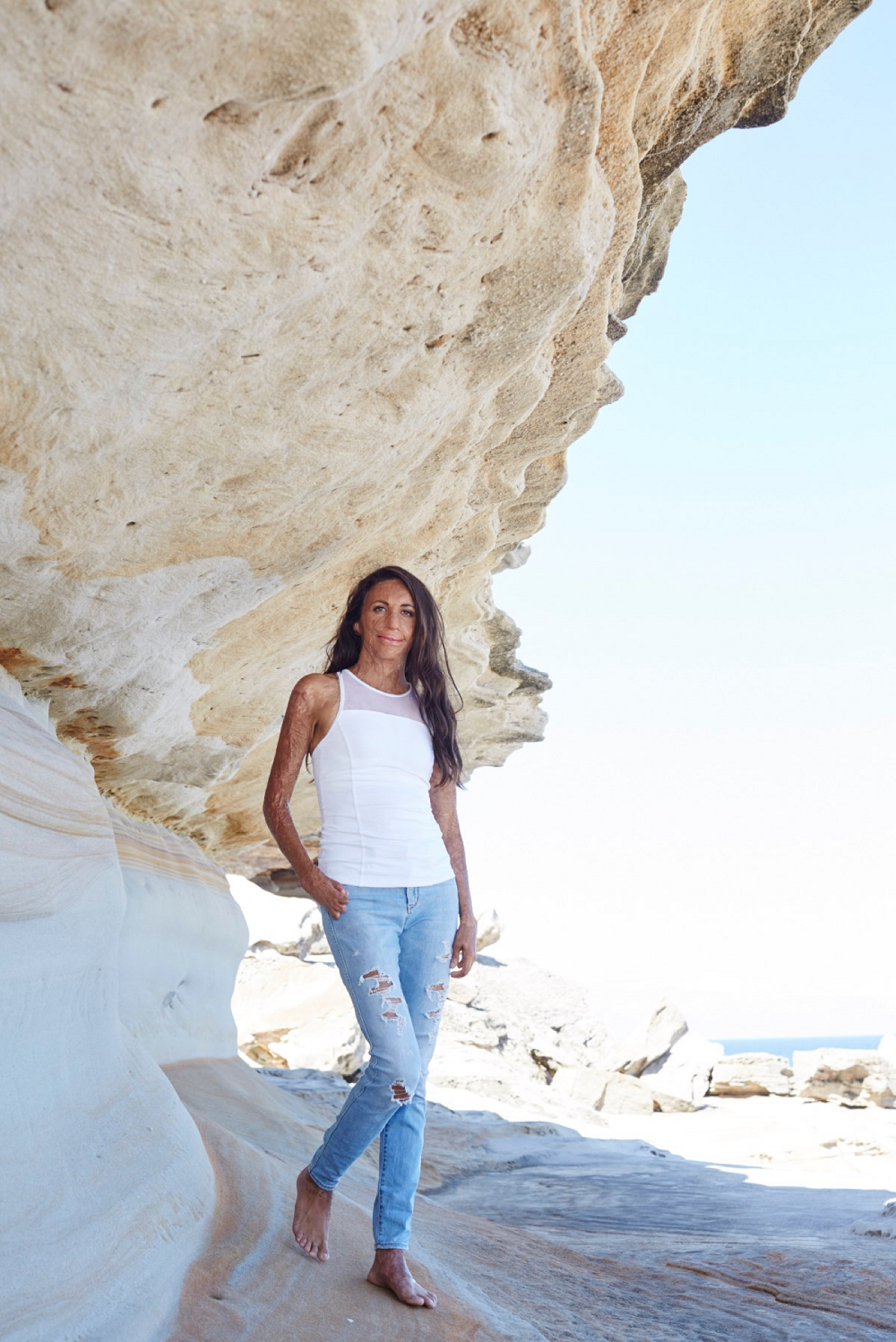 In response to questions from the audience, Turia notes that while she’s been privileged with plenty of public visibility and opportunities, this isn’t necessarily the case for other minority women.

She says that when she was on the cover of Australian Women’s Weekly, the magazine sold 70 per cent more copies: “There’s a business case for having someone who looks like me on the cover. So I don’t know why the media…aren’t listening to that.”

Turia urges those working in the media – many of whom are in the room – to “set themselves a target” and think about who is on the front of their magazines.

“Say, ‘For this year we’re going to have four women who are diverse, whether they’re black, Indigenous, disabled, older, whatever it is’.”

Although Turia repeatedly made it clear that she’s a storyteller and not a politician, she did have words to say on the topic of gender equality: “I love this country. Genuinely I do. I migrated here when I was a baby, and I’m proud to call this sunburnt country my home. But it’s hard for me to reconcile my love for this country with the fact that women are not equal here.”

She believes in gender quotes for workplaces: “When you have these goals and ambitions…they don’t get achieved.”

“I really think it needs to be a legal requirement,” she says, and “there needs to be harsher [financial] penalties to help businesses achieve that.”

This article was first published on BroadAgenda on 19 July 2021. Words by Ginger Gorman, Editor. Photos by Grace McBride and Juli Balla.

The school system is under enormous pressure – as are parents trying to balance their leave and kids' time off from school. It’s an issue that disproportionately affects women in single parent households, writes Clare Sullivan, from the 50/50 Foundation at UC.

Want to do a PhD about cyberhate against female athletes?

Women who play, watch and work in sport are often on the receiving end of the worst cyber violence – a new Women in Sports Industry partnership scholarship from the University of Canberra and Sport Integrity Australia will enable research into the scale, causes and solutions of such abuse.

Weaponising motherhood: How anti-vaxxers target moms to sell their message

Anti-vaccine influencers are targeting mothers on social media, and have weaponised many of the tropes of motherhood – research from UC’s Associate Professor Michael Walsh sheds light on their strategies and methods.