For many Canberrans experiencing their sixth week of COVID-19 lockdowns, the thought of being in the Queensland sun (and experiencing the state’s relative freedoms) is bliss.

For final year Bachelor of Business (Sports Management) student Steph Backer, those blissful thoughts have become a reality, after making a temporary move to the sunshine state in July as part of her job with the Canberra Raiders.

When the National Rugby League (NRL) announced midway through the 2021 season that the competition would relocate to Queensland, clubs scrambled to organise for players and staff to make the move up north.

The catch? Those involved had around 24 hours to pack up their lives and get on a plane.

“We’d been suspecting that it was probably quite likely that the team might have to relocate because of the spread of COVID-19 across Australia,” Steph – an Events and Data Analysis Coordinator for the club - says.

“I got the news at about two o’clock one afternoon that there was the opportunity for me to go with them, and I had about an hour to make the call.

But the decision to head to Queensland didn’t come without difficulties. The week of the move, Steph and her partner were set to move house back in Canberra.

“My partner has been incredible, he’s so supportive. I don’t think I actually could have come up here without him back home, looking after everything,” she says.

“It can definitely be lonely living here, not knowing many people at all, but just knowing I have that support network at home and having the tools to Zoom or FaceTime makes it so much easier.”

Steph has worked at the club in various capacities since 2018. Her initial role came from an unexpected internship opportunity.

“Even when I was at school, I just had this dream of working in the NRL. Once I was at uni, people  told me to get ahead of the curve and apply for an internship in my second year, instead of my third,” Steph says.

“Straight away, I looked into the possibility of doing mine with the Raiders, but there were no internship opportunities listed on their website. So instead, I applied for their volunteer program and explained that I wanted experience before applying for an internship in the future.

“My now-boss called me and let me know that there was actually an internship opportunity available, and invited me to complete an application.” 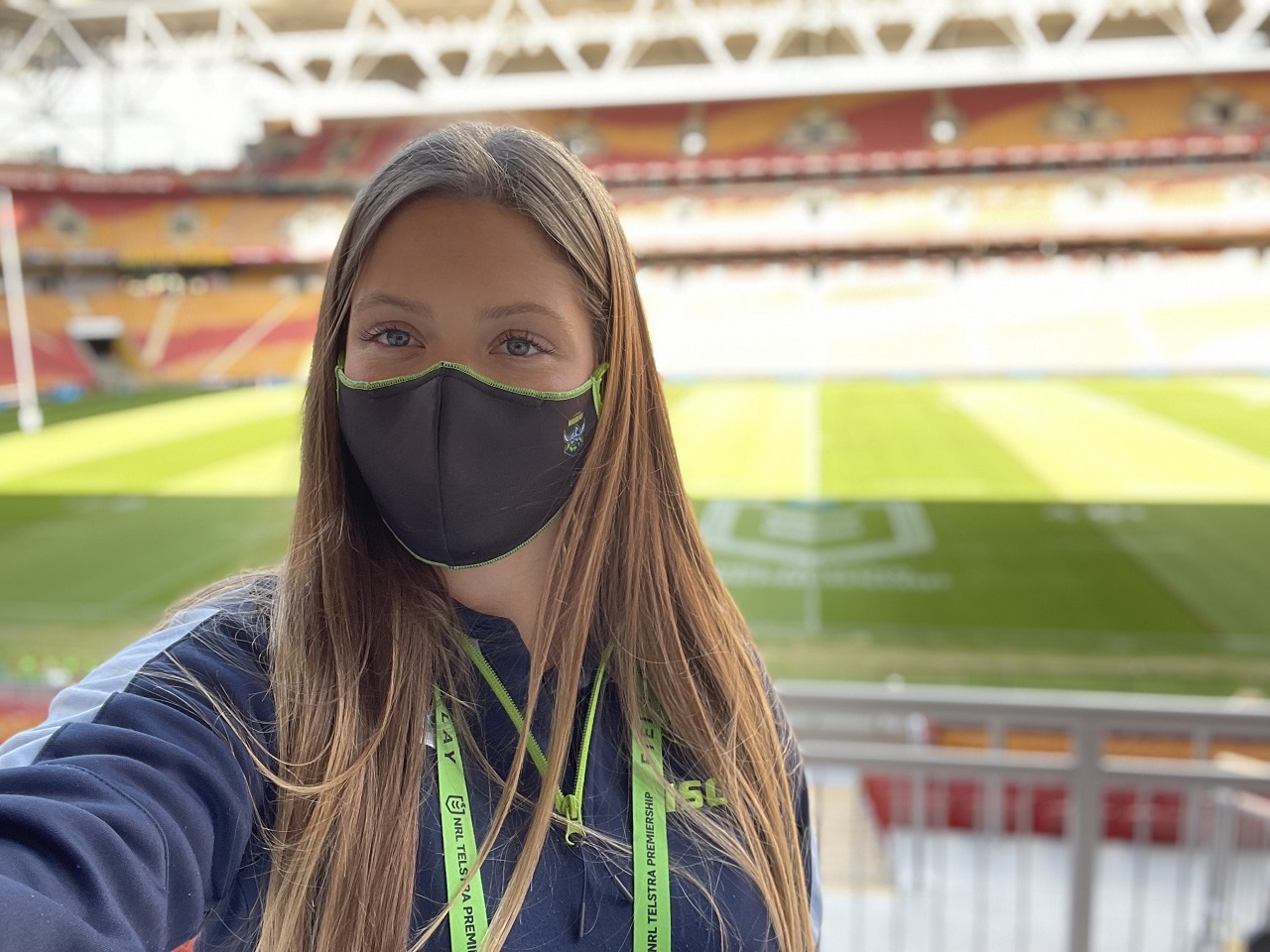 With a childhood filled with sport and recreation, Steph knew that she wanted to work in the space. She was an avid netballer, until an injury and chronic illness meant she had to step away from the sport.

“Growing up, I played representative netball and also made some of the ACT development squads,” Steph says.

“Then I tore my ACL [anterior cruciate ligament], and was diagnosed with ulcerative colitis, so I was quite unwell for a while, and my rehab was awful.”

While she could no longer play the sport herself, the change of pace meant Steph could step into the coaching and management side of things.

It only fueled her passion for being involved in administration – and now Steph couldn’t be more sure her decision was the right one.

In a typical season when the Raiders have a home game in the ACT, Steph coordinates the club’s events and assists with game-day logistics, but while working in Queensland this year, she’s dabbled in several areas, further growing her skillset.

“I’ve been to so many different NRL matches – whether the Raiders were playing or not – and I’ve acted as a floor operations manager, a production show caller, an equipment courier and more. I’ve worked at regional stadiums where they’ve never even hosted an NRL game before – let alone with all the COVID-19 and bubble regulations we have to abide by,” Steph says.

Somehow, amid it all, Steph is completing the last semester of her undergraduate degree. She says most of her spare time is dedicated to study.

“I think being up here alone really helps with the motivation – there aren’t too many social events to distract me from my study,” Steph says.

“I had a Zoom earlier this afternoon for a group assignment, so it’s very much business as usual on that side of things.”

Once she graduates, Steph is hoping to stay with the Raiders – a workplace with many opportunities. She’s also passionate about increasing women’s participation in the sport, and hopes to contribute to the many programs dedicated to achieving that goal.

“I’m so passionate about women in sport and it’s an area that I’m really pleased to see is growing,” Steph says.

“It’s going to be great to see the introduction of a Canberra women’s team in the NRL, so hopefully I can do some work in that space as well.”